Pastor Erwin McManus encouraged City Harvest Church to be instruments of good, especially in the challenging time that they are living in, to share the message of love, hope, life, and Jesus to the world. Over the weekend of July 4 and 5, Erwin McManus, lead pastor of Mosaic Church in Los Angeles, spoke to City Harvest Church for the second time this year. Pastor Erwin shared with the congregation a timely message about being a light in the midst of darkness by having a courage of desperation, a victory of surrender, an abundance of favor, and a generosity of grace.

Pastor Erwin began by casting light on the reality of the global COVID-19 pandemic, a situation that has filled many people with anxiety and fear.

“In our aloneness, we can feel an incredible sense of loneliness and desperation,” he said. “But when we have a relationship with God who created us, we are never filled with desperation because we are never abandoned.”

Because of this hope, Christians can see light in the darkness and they have a reason to live.

2 Kings 7:3 records the conversation between four men with leprosy at the gates of Samaria, who were denied access into the city. The verse reads, “They said to each other, ‘Why stay here until we die?’”

Pastor Erwin pointed out the positive spirit of the four lepers. Even though they were outcast, they did not lose hope. On the other hand, in our society, there are people who are always negative. The problem with them is that sometimes they are right about their situation. “The worst thing that can happen to a negative person is for their view to be validated,” said the pastor, “because they are now convinced that every negative view they have is going to become the future.”

In 2 Kings 7:4, the lepers began to assess their situation and concluded that they had a chance to survive if they surrendered at the enemy camp. “There is a beautiful place where we can enter in the middle of a crisis,” said Pastor Erwin, explaining that this is where a person finds the courage to move forward, just like the four lepers, because they knew that staying where they were was no longer an option. “Sometimes, it’s actually living in safety and security that could be the death of us,” he said. “There’s something incredibly freeing and powerful about coming to a place of desperation.”

Pastor Erwin shared that in moments of desperation, people realize that they have nothing to lose but everything to gain. These are also the moments where courage defines itself, faith elevates, and believers can be the light in a dark world.

“I wonder what God would have to do to get you to leave simply surviving, and to live thriving; to become dissatisfied with existing, and to insist on living,” he challenged. “You need to step into your faith and courage right now!”

When the four lepers reached the enemy camp, they found it empty because the Syrians had fled in terror when they heard the sounds of chariots of horses that God sent. “This beautiful moment is revealing to us is that there’s a victory that only comes in surrender,” said Pastor Erwin.

Unwittingly, Christians have been living at war with God and the life He has created for them to live. They often talk about “surrendering” their lives to Jesus—the pastor pointed out that a person only surrenders to their enemies and not their friends. In that way, Christians think that they are stepping into a worst-case scenario by surrendering to God.

“In that moment, you realize that there’s a life you cannot live unless you step into surrender with God,” he continued.

There may be people who have trust issues; because of past experiences, they have developed an inherent fear that God is going to let them down if they put their trust in Him. However, God has already prepared the way and won the battle for them. When the four lepers went into the Syrian camp, they thought they would have to surrender, but the city had already surrendered to them.

“God has already won that battle for you,” the pastor declared. “You have to step into it and trust Him!”

2 Kings 7:8 continues by describing how the four lepers initially hid the abundance of food and possessions they found in the tents. Pastor Erwin shared that when Christians have a relationship with God, they step into this peculiar place called the “abundance of favor”. This place of favour may even drive them to the false conclusion that God is pouring things into their lives just so that they can have more and more.

“I don’t want you to think for one minute that the favor in your life is for you to have more than everyone else,” Pastor Erwin told the viewers. “It is for you to be more generous than anyone else.”

“So often, when we receive, we don’t hear it as a mandate from God,” said the pastor. “There are people losing their jobs in this time of a global crisis. I don’t know if there’s a better time to ask: are you sitting in the abundance of favor and you are still hoarding it for yourself?”

Pastor Erwin encouraged the church to be instruments for good as they grow in abundance.

In 2 Kings 7:9-11, the four lepers realized that they should not be hoarding all the wealth for themselves, while the rest of their city lived in famine, so they went to inform the king of the abandoned Aramean city. Likewise,  Christians have and must use the opportunity to share with the world what they have. 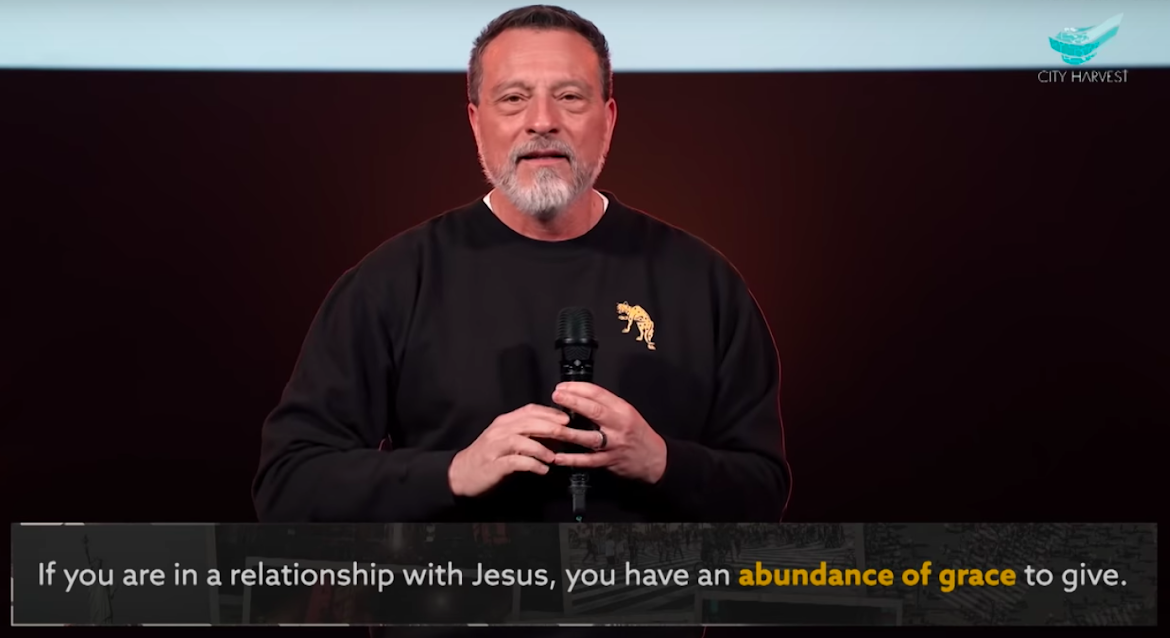 A believer should never let anyone convince him that he does not have much to give to the world, said Pastor Erwin. Some people may need a small dose of compassion, kindness, encouragement, tenderness, gentleness or forgiveness. Some may just need a person who believes in them, or they may need hope they can get through this moment.

“Don’t believe for one second that you do not have what the world needs most,” Pastor Erwin emphasized.

The four lepers in 2 Kings 7:3-11 understood the ethics of sharing, caring, giving, and generosity, said the preacher. They were so desperate that they stepped into something they could not imagine–they became the source of wealth and hope that their people needed.

During COVID-19, people begin to ask deep meaningful questions, like “Where is God?” It is in these moments that Christians can bring hope to the people who are desperately afraid by sharing the Good News, said Pastor Erwin.

In closing, he prayed a moving prayer for those who have yet to have a relationship with Jesus. “There is no famine that God cannot take you through, no crisis that God will not show you the way, and no darkness where He would not bring the light,” he declared. “Find the courage of desperation and say, ‘God, I just need You.’”

Pastor Erwin also blessed the rest of the congregation with a prayer that, in this moment of crisis, they will be the light in the middle of darkness by sharing love, hope, life, and Jesus to the world.

Kiana Sarah Koh, 25, a publicity coordinator who watched the online service told City News that, while watching, the Lord reminded her of how Christians can always be a blessing because God has called them to be one. “Even in our valley moments, we can always accompany a friend and to support, to pray, and to be a blessing,” she said.