5 Things Love Is Not: Kong Hee

In the second instalment of his message of the love of Jesus, Pastor Kong Hee elaborates on five things that love is not. 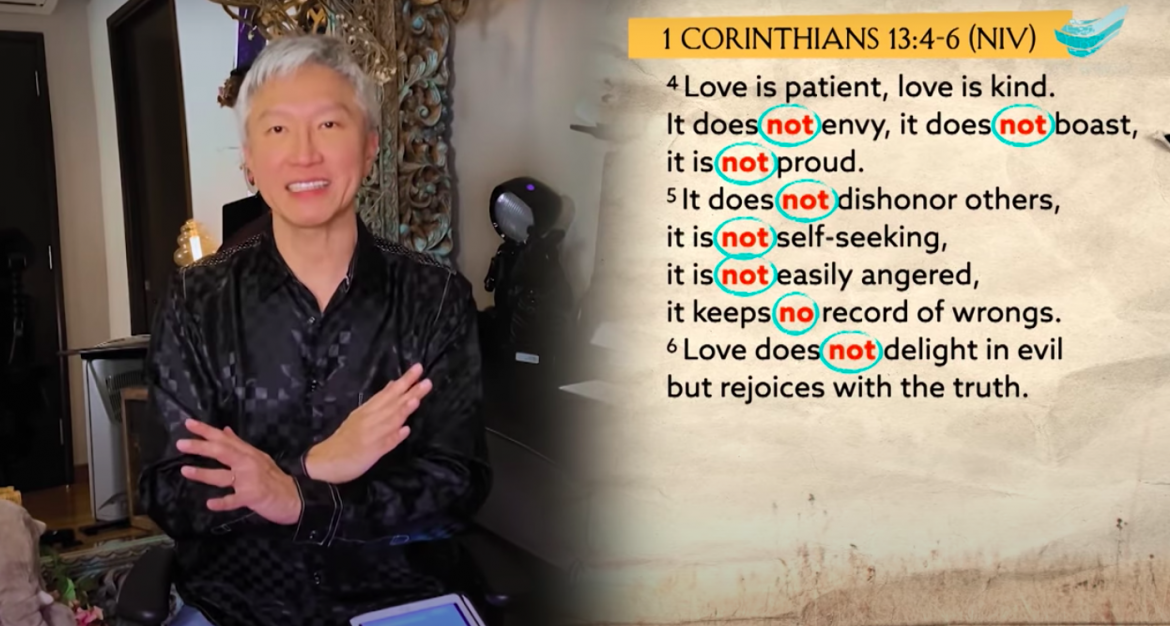 “Love is patient, love is kind. It does not envy, it does not boast, it is not proud. It does not dishonor others, it is not self-seeking, it is not easily angered, it keeps no record of wrongs,” reads 1 Corinthians 13:4-5, the most famous verses that describes love. Continuing on the second part of the series on the topic of love, City Harvest Church’s senior pastor, Kong Hee expounded on the first five things that love is not.

Preaching online over the weekend of May 16 and 17, Pastor Kong said of these five things: “They are all common reactions of men, but never of Jesus, not even when He was under severe pressure, or when He was provoked while He was on earth. And this must be true of our lives too.”

1. LOVE DOES NOT ENVY
Envy is a violation of the 10th commandment: the sin of coveting. To envy is to desire something that belongs to someone else. Pastor Kong highlighted that the hallmark of envy is comparison, and that an envious person is often competitive. He told a fable of an eagle who was envious of another who could fly better and higher. The eagle persuaded an archer to shoot down its competitor. While the archer agreed, he asked for a feather from the eagle for each of his arrows. As the archer missed, again and again, the eagle soon found itself with no feathers left to fly. Taking advantage of the situation, the archer killed the now flightless bird.

“The moral of this story is that envy kills,” said Pastor Kong. “The Bible says that envy is the mother to many sins. Because of envy, Abel was murdered. Because of envy, Joseph was enslaved, and Jesus Christ was crucified on the cross.” The disciples of John the Baptist were envious of Jesus when His ministry became more successful. The disciples of Jesus were envious of each other. Even at the last supper, the disciples were found bickering among themselves. Pastor Kong asserted, “Envy is a very dangerous thing; once you let it creep in, it kills all the love that you have inside you.”

The attitude of Jesus was to always esteem others better than Himself. In fact, He said in Philippians 2:3 (MSG), “Put yourself aside and help others get ahead. Don’t be obsessed with getting your own advantage.”

“Don’t compare and don’t compete,” the pastor encouraged. “You don’t have to win and be number one in everything in life. Just do your best in what God has gifted you to do, in the place He has planted you in.” Because God looks at the person’s heart and his attitude, not his achievements.

2. LOVE DOES NOT BOAST
A loving person is always concerned about others, but a boastful person is concerned only about himself, said Pastor Kong. “Boastful people are always worried that they won’t be valued if they don’t make known how capable they are,” he explained. But the agape love of God is never boastful; it can exist anonymously, even if no one pays attention or shows appreciation. 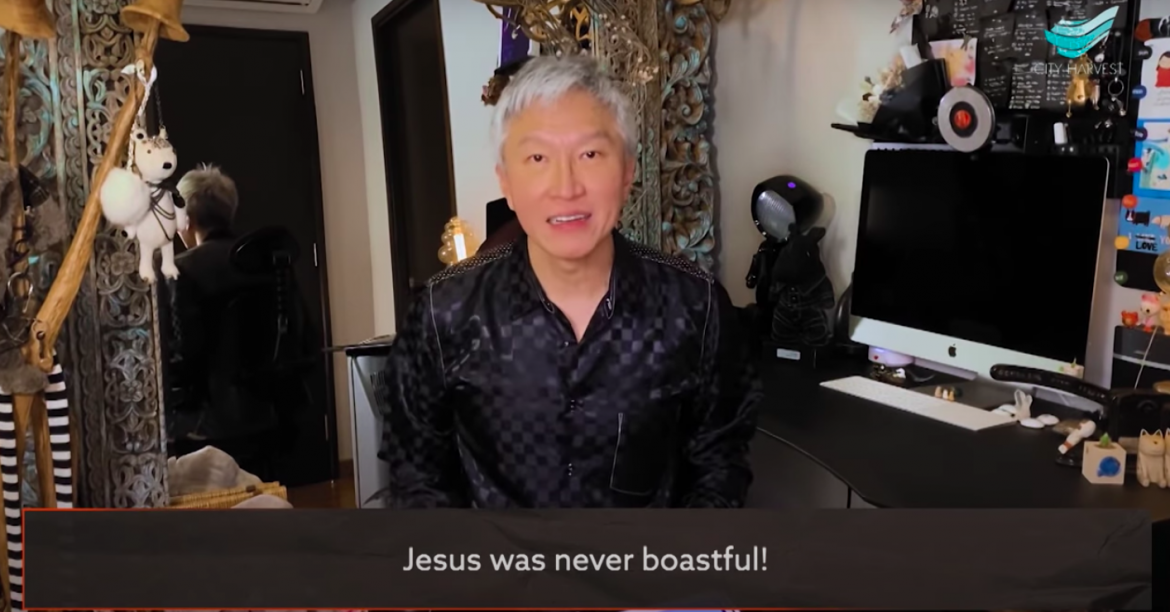 Jesus was never boastful. Even when He was scoffed at for being a carpenter’s son, He never retaliated even though He was the Son of God. Jesus never needed to prove anything to anyone; His goal was to glorify the Father and advance His Kingdom, and He never felt the need to broadcast His good works.

3. LOVE IS NOT PROUD
Reading Jeremiah 9:23 and 1 Corinthians 1:26, Pastor Kong reminded the church that education, talent and wealth are three things that lead to pride, and pride is the worst sin in the Bible.

Jesus is the most loving because He is the most humble. As God, He could have been born into a rich and powerful family, but He did not. He came as a common man into the world and chose to die the worst possible death. 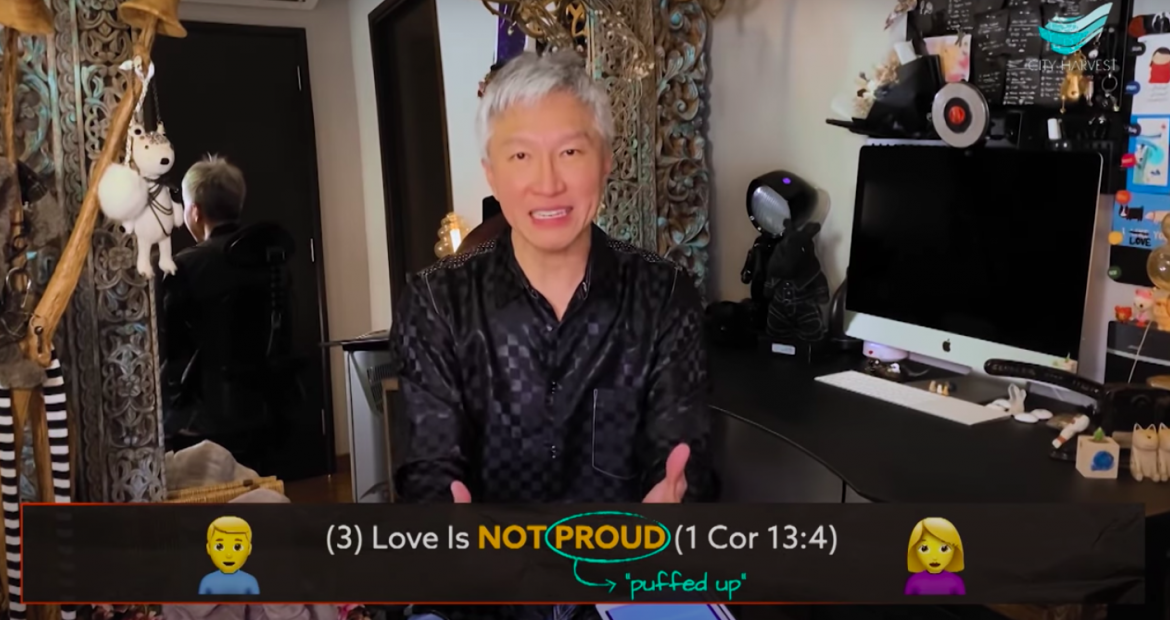 Pastor Kong went on to read John 13, the story of the Last Supper. After the meal, Jesus knelt down before His disciples—including Judas whom He knew was going to betray Him—and washed their feet, performing the task of the lowliest servant.

Giving context to the story, Pastor Kong noted that the disciples were not willing to do the washing because they felt that washing of feet was beneath them. “And since no one was willing to do it, Jesus humbled Himself and became the lowliest servant of all. Jesus Christ shows us that love means serving people willingly, doing the most menial task. The mark of genuine love is humility.”

4. LOVE IS NOT RUDE
A loving person is courteous. The word “courtesy”, said Pastor Kong, is the abbreviation of “court etiquette”, that is, how one behaves in the court before the King. Just as the members of the royal family display impeccable manners, Pastor Kong suggested that Christians who serve the King of kings should uphold themselves in good manners. “Those who possess agape love are called to polite behavior. We must not be pushy, inconsiderate, vulgar, or offensive in our speech,” he preached. 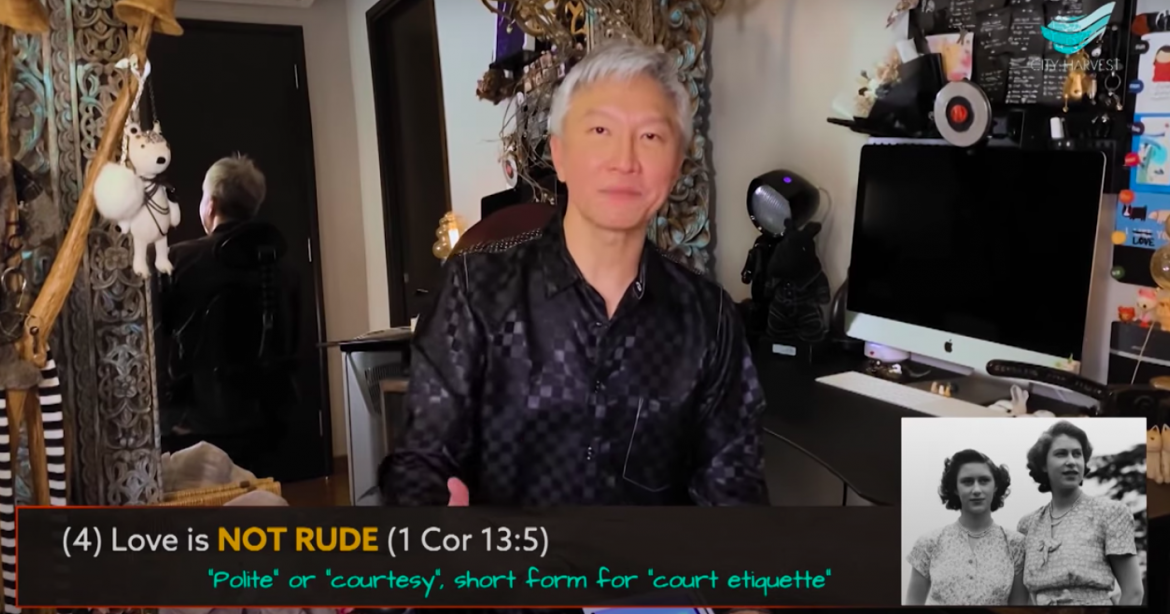 “Harshness of speech is a form of rudeness,” he went on to say. “We should never interrupt each other or raise our voices in conversation.” He gave the example of Paul on trial before King Agrippa (Acts 26). Even though he was rudely interrupted by Festus, the prosecutor, Paul was polite and honoring. King Agrippa was so impressed by Paul’s manners and demeanor that he said in verse 28, “you almost persuade me to become a Christian”.

Pastor Kong acknowledged that it was hard not to shout when provoked, but he reminded the audience that  “raising your voice when you’re provoked is a sin”. Reading Ephesians 4:31, Pastor Kong encouraged the church to put away clamor and evil-speaking, and learn to be gentle, encouraging and honoring.

Being polite also means to not become over-familiar with people. “You’re basically saying, even if you’re hurt by my actions, my words or my attitudes, I don’t care,” he explains. “But love cares. Love is sensitive and tactful about people’s feelings.”

5. LOVE IS NOT SELF-SEEKING
Pastor Kong acknowledged that it is human nature to be selfish. Many people perform acts of kindness only when it does not conflict with their own self-interest. “But it’s precisely when there is a conflict, when you could suffer loss or personal harm, that a supernatural love is needed,” he said. One of the most famous stories of selflessness is found in 1 Kings 3:16-27. When two mothers fought over a baby, King Solomon proposed to cut the baby into two and offer each woman half. The real mother pleaded with the king not to kill the baby, while the other woman was happy to have the baby die. The king immediately knew who the real mother was.

This story revealed that agape love is unselfish. The Bible says that Jesus loves with no selfish ambition or conceit, and that He looks out for the interest of others. When He was challenged to define love, Jesus replied with the parable of the Good Samaritan. When the Samaritan saw the wounded Jewish man left on the street to die, he did not turn a blind eye. Instead, he overcame their racial and cultural differences and attended to him.

In concluding, Pastor Kong noted that 1 Corinthians 13:7 addresses five kinds of darkness inside each person. “We must let the light of God’s truth dispel them,” he exhorted, “so that we can become more like Jesus in love, agape love.” 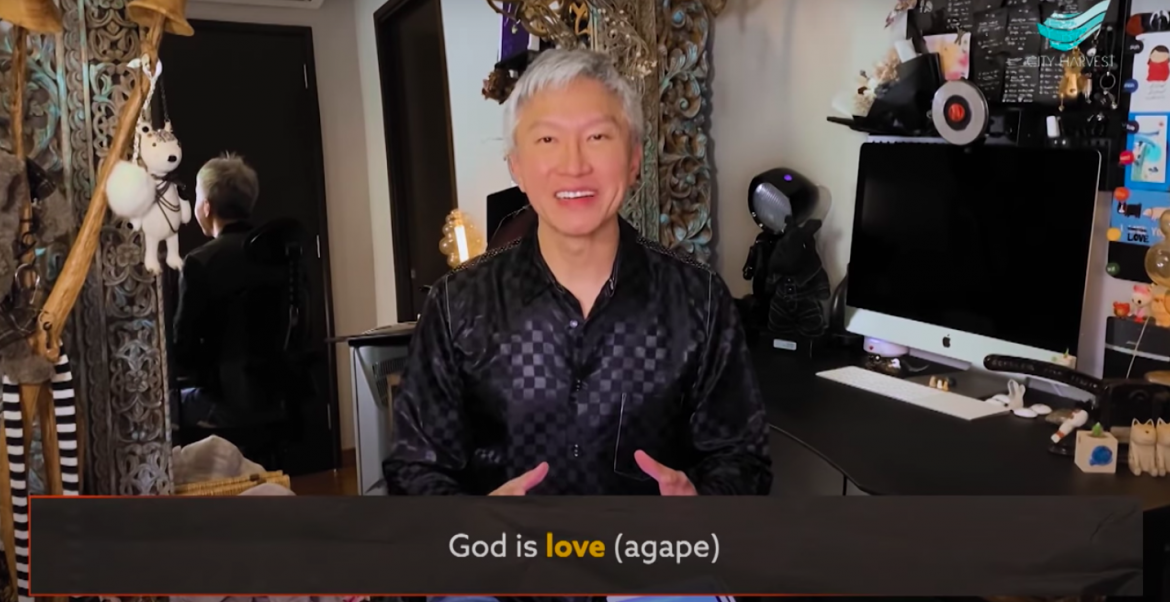