How To Pray In Troubled Times: Bobby Chaw

In a season of adversity, when things seem hopeless, how should we pray? At City Harvest Church’s first online service in the face of COVID-19, Pastor Bobby Chaw taught the congregation to pray like King David did in Psalm 3. On Feb 15 and 16, for the first time in its 30-year history, City Harvest Church’s congregation worshiped God simultaneously in their own homes or wherever they were, streaming the weekend services on their TVs, iPads, laptops and smartphones.

Given the increase in the community spread of COVID-19 in the past week, which saw infection clusters in two churches, CHC’s leaders decided to bring their service online instead of meeting physically on weekends. This arrangement will be maintained till end of February for the time being. How the situation develops will determine when services resume at the church’s Suntec Convention and Jurong West premises.

The service was broadcast on the church’s website and The CHC App at the usual service timings: Saturday at 5pm and Sunday at 10am. Many expressed their curiosity about the setting and the format of the service.

The service started off with Sun Ho, CHC’s executive pastor, explaining the need for the alternative arrangement for the weekend services. She assured the members that they would experience God’s presence wherever they are.

After praise and worship, Aries Zulkarnain, executive pastor of CHC, announced the observance of Lent from Feb 26 to Apr 11. The church will be embarking on a journey to reflect on Jesus’ suffering leading to the cross and the hope of the resurrection at Easter. There will be a Bible-reading program–completed with devotions written by CHC pastors–and a three-day (Feb 26 to 28) online prayer meeting, The Crowning Sessions.

The pastor first brought the congregation through Psalm 91:14-16—this season’s most prayed prayer—explaining that God promised to answer the call of those who know His name. 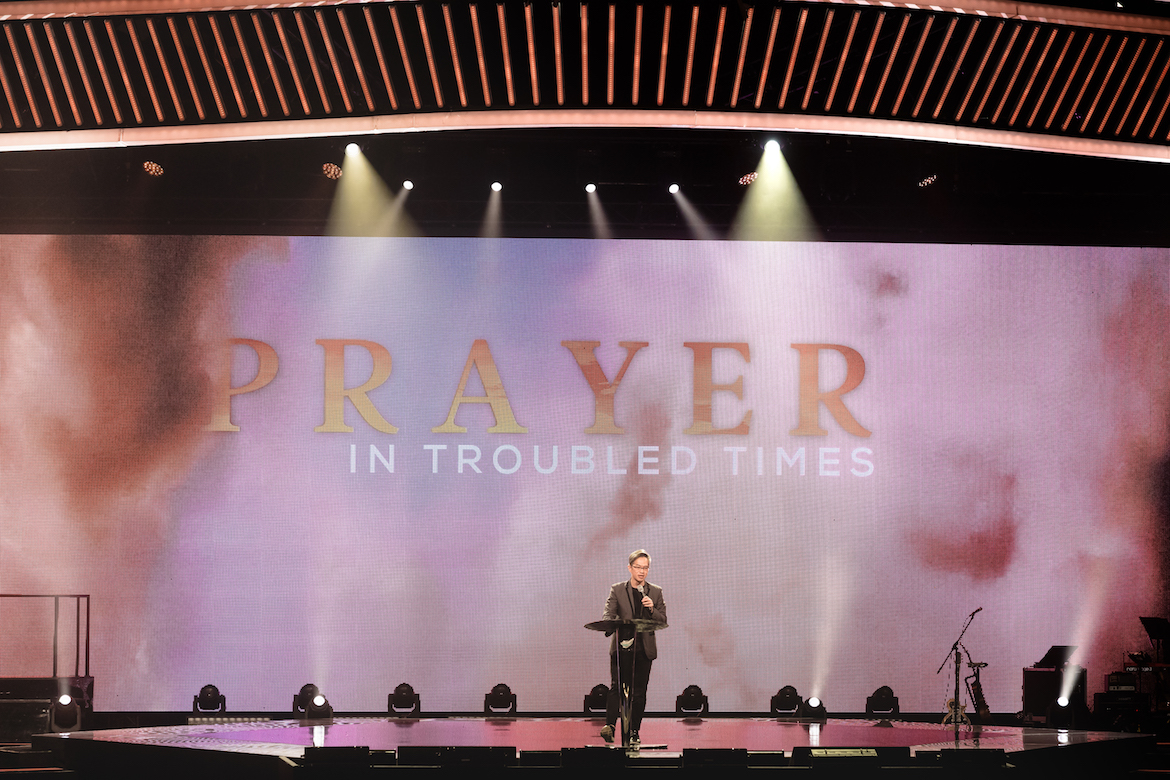 “Knowing the name of God is closely related to prayer,” Pastor Bobby said. Throughout the Bible, God has revealed Himself through His name. The names of God reveals who He is and describes His character and His nature.

“God is faithful and His nature is constant. When we know Him, we can trust Him. And if we trust Him, we can pray in confidence,” he explained.

Of Psalm 3, Pastor Bobby said, “This psalm of David talks about how we can cry out to Him.” Psalm 3 was written by David at the lowest point of his life. It was his lamentation when he fled from Absalom, his son who sought to kill his father and take over his throne.

1. BE HONEST IN PRAYER

Pastor Bobby drew the congregation’s attention to verses 1 and 2, where David poured his heart to God. The pastor assured the congregation that it is all right to be honest with God because He will not be shaken; in fact, God already knows their needs before they cry out to Him.

“Notice that the words ‘increased’ and ‘many’ appear a lot in the passage,” said the pastor. “The enemies and problems were not going away; instead, they kept increasing.” On top of problems, he added, there would also be many voices of lies and accusations.

“David was a noble king, a man after God’s own heart, but now the people were mocking him,” noted Pastor Bobby. Yet David did not deny the reality of his trials and tribulations. He faced the situation squarely and called out to God.

The preacher explained that the word “LORD” used throughout Psalm 3 means “Jehovah”, which means “I am Who I am”. In using the name “Jehovah”, David was calling out the Mighty One of Israel, through Whom all things are possible. David was entrusting himself to the God who is mighty to save.

Jehovah, at the same time, is the “merciful, gracious and longsuffering” God (Exodus 34:5-6). “Jehovah was the Abba father to David, even though he was the prodigal son,” said Pastor Bobby, reminding the congregation that David was an adulterer and a murderer. Yet “Jehovah was David’s assurance, and he was confident of His unchanging nature.”

The pastor concluded, “In times of challenges, we can be honest about our challenges. We can be bold and confident and know that the mighty one who is still ‘I am who I am’–the one who saves!” “David was saying that the Lord is the king who will protect him,” explained Pastor Bobby. In the time of the Old Testament, the pastor added, people often seek protection from the most powerful king. The king became their shield and would fight for them.

The word “shield” first appeared in Genesis 15, where Abram and his trained servants defeated four kings and their armies, to rescue Lot. The pastor explained that Abram was able to successfully carry out this seemingly impossible military expedition because he had received assurance from the Lord: “Do not be afraid, Abram. I am your shield,” (Genesis 15:1).

“Abram did not seek refuge in an earthly king, but in Jehovah!” declared Pastor Bobby. “It is in the nature of Jehovah to protect and fight for us. He is constantly fighting and protecting us every single day.” Reading Psalm 91:1-6 where the psalmist entrusts himself in the Lord’s refuge, Pastor Bobby proclaimed that “His truth shall be your shield” and encouraged the members “[to] not be afraid”.

“David was not afraid not because of his foreknowledge and military might, but because of the king in whom he has taken refuge,” explained the pastor.

When David was forced to flee Jerusalem, he left the place where the presence of God resides. Yet in Psalms 3:4, David was confident that God “heard me from His holy hill.”

“No matter how far you have felt you have fled, God will always draw near to those who call upon Him!”

3. TRUST IN GOD
Reading verses 5 and 6, Pastor Bobby pointed out that David trusted the Lord so much that he was able to lay down and sleep even when his enemies were actively pursuing him.

David was not the only one who had this confidence in God. The psalmist said in Psalm 46:7 that “the LORD of hosts is with us”. In 2 Kings 6:15-17, Elisha took refuge in the Lord whom he believes will send his heavenly armies to protect him and his servant from their enemies. In Acts 12:5-6, Peter was also found sleeping when he was surrounded by his enemies—he trusted that his God would protect him.

“God is always the Lord of the armies. Nothing can stop Him from delivering us,” said Pastor Bobby.

4. EXPECT GOD TO ACT
In Psalms 3:7, David called upon the Lord to save Him. “Can God deliver us? Yes! But we cannot shift our responsibilities to God.” The pastor drew the congregation back to the present situation, reminding them that in this time of COVID-19, it is imperative that everyone practices good personal hygiene.

Having done all, Christians can expect God to move: He is the One who protects and fights for His people. “We can expect Him to do what is consistent with His nature and character to protect and fight for us,” he said.

“Why would Moses always have to repeat himself? It was not to remind God but to remind himself and his people that in this journey of life—no matter what—unless the Lord goes ahead of us and fight for us, we will be defeated,” explained Pastor Bobby.

The last verse, Psalm 3:8, showed that David was not merely concerned about his deliverance or the security of his kingship; his prayer was that God’s blessing will be upon his people. The pastor then called upon the congregation to look out not only for one’s own interests but also for the interests of others.

“Church, I want to encourage you to keep praying for our loved ones and colleagues because He always listens to us. Then how should we pray? Be honest. Be focused. Trust and expect a miracle from the Lord,” the pastor reminded the flock, in closing.

EXPERIENCING THE PRESENCE AT HOME
“Pastor Bobby’s message was a reminder of the unchanging nature of God,” said CHC member, Lai Ming Rui, 27. “In times of crisis, when we cry out to Him, He will hear us. I’m thankful for all the effort that’s been poured into making sure service still goes on when we cannot physically congregate. I’m grateful to all the church staff members for making it happen on short notice. We serve an omniscient God that is not bound by physical space!”

While watching service online may have been more convenient than heading down to the church, some would have preferred to be physically present at church. However, they understood that it was prudent for the leaders to make such a decision.

One of the members, Arissa Wong, 27 said, “To be honest, I always feel that being at church hall is better than a digital service. But because of the current circumstances, I think we have no choice also but to watch service online. I used to find it distracting when I am watching at home but I told myself: ‘I have to stay focused, I have to engage even more in the Spirit. During worship, God opened my eyes and thoughts about certain perspectives of my life. Never have I thought that I will receive even while watching online, but I guess it all boils down to a heart of expectancy.”