Wu Yuzhuang preached a powerful message based on the story of Jesus healing a blind man in Bethsaida, encouraging the church to seek the second touch of God. 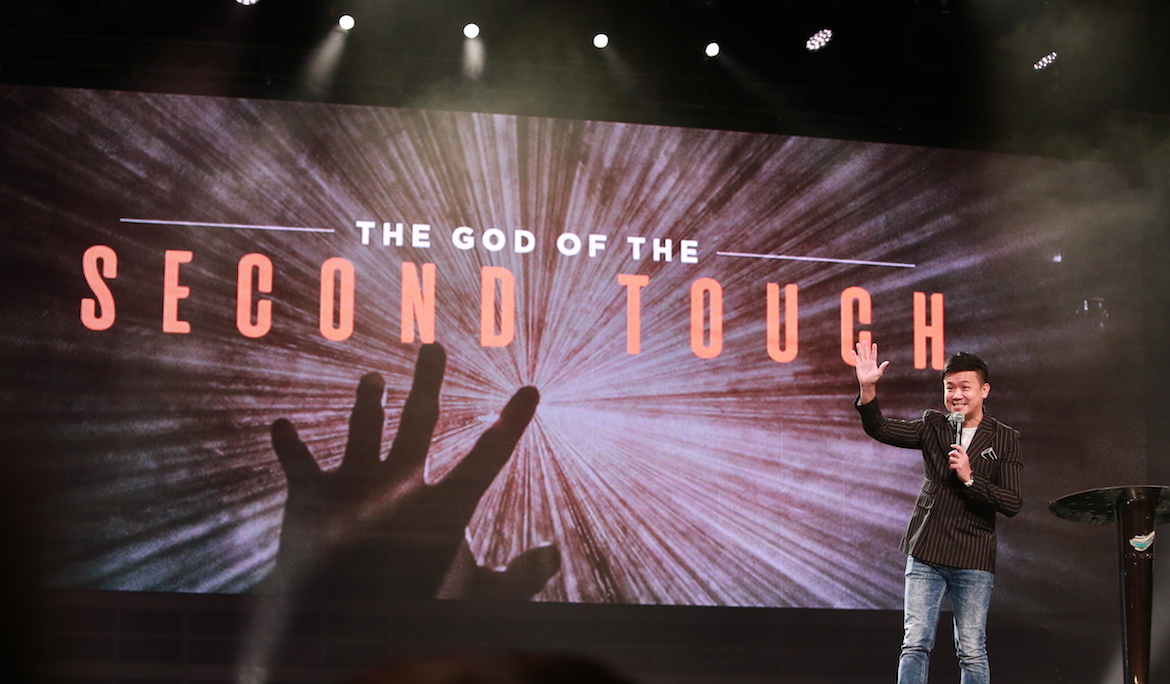 “The first touch from God saved us. However, it is the second touch that will change us. It will change our habits, character, and nature,” said Wu Yuzhuang, a pastor of City Harvest Church.

Pastor Zhuang was preaching a message “The God Of The Second Touch” over the weekend of Aug 10 and 11, 2019. He brought the congregation to the main text of his sermon, Mark 8:22-25, where Jesus healed a blind man from Bethsaida.

“Jesus blessed the food, broke it, and then He multiplied it. Why is this order so important?” asked Pastor Zhuang. “It is because it shows us that just because we have a broken situation now does not mean that God is not blessing us. What was just enough for the little boy became more than enough for everyone. In the same way, whatever we allow Jesus to break in our lives can be used in a much greater way.”

WHAT WE CAN LEARN FROM THE BLIND MAN AT BETHSAIDA
The pastor then returned to the story of the blind man in Mark 8. In this story, the people in Bethsaida brought the blind man to Jesus and begged Him to touch him so that he could be healed. In response, Jesus led him out of the town.

“We may not know exactly why Jesus brought the blind man out of the town, but we do know from this that whatever we want Jesus to heal, we must allow Him to lead,” said Pastor Zhuang. “Sometimes, we want Jesus to heal our lives, but we may not be willing to follow His leadership. Jesus should not only be our Savior. He should also be our master.” 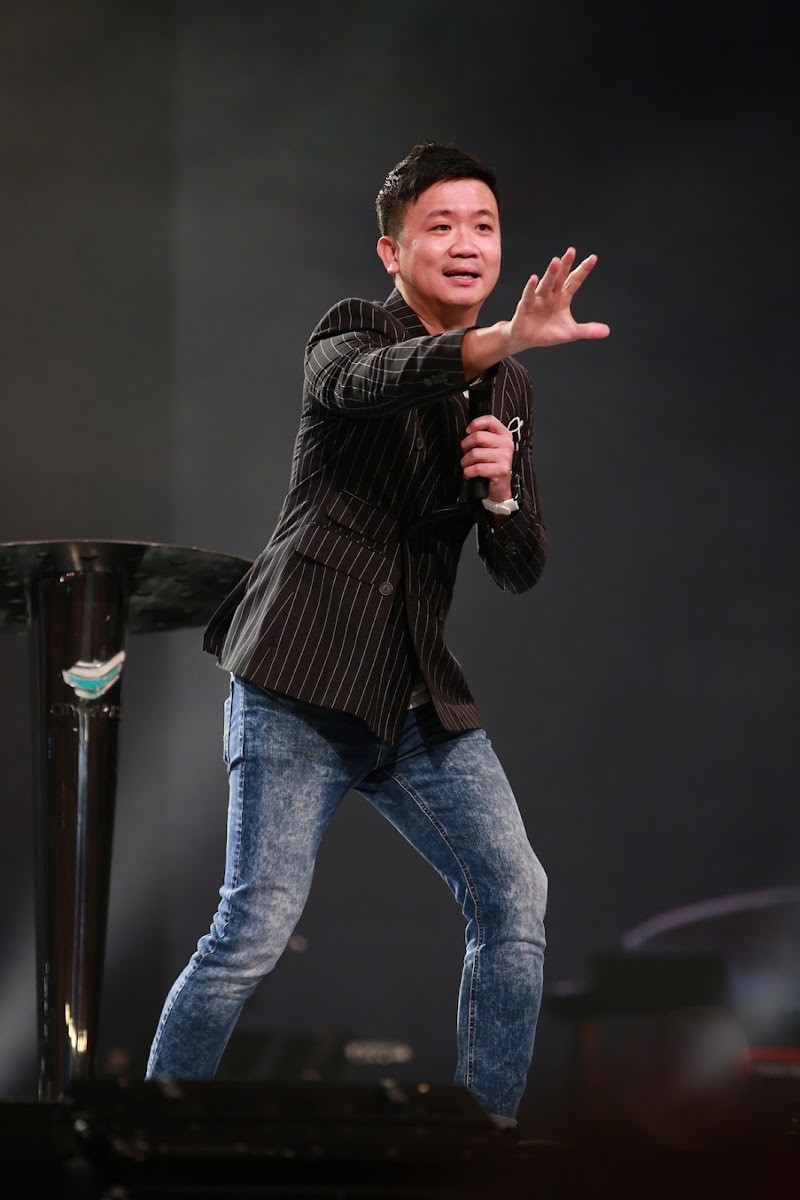 After Jesus led the blind man out of the town, He spits on his eyes and put His hands on him. He then asked him what he could see. The man replied that he could now see people, only that they looked like walking trees. As he brought the congregation through a closer study of the story, Pastor Zhuang postulated that the blind man must have had been able to see at one point of his life, since he knew what trees looked like. However, something happened and he lost his vision.

He quoted Helen Keller, the famous blind and deaf author and crusader for the handicapped: “The only thing that is worse than being blind is having sight but no vision.” The pastor explained how the blind man’s predicament was similar to what many are currently facing. “Some of us may have had visions for our lives once,” he said. “However, something happened and we could no longer see. We lost our vision.”

The story, however, did not end with Jesus touching the man only once. Pastor Zhuang pointed out that in Mark 8:25, Jesus put His hands on the man’s eyes again. At this point, his vision was fully restored and he could see clearly. “Now, was the first touch of Jesus not good enough, or was there some form of intentionality in His actions?” the pastor asked. “When God does something, He does it intentionally. And when God does nothing, He also does nothing intentionally. Jesus had most probably intended to heal the blind man after two touches, and not one touch. He is trying to teach us something from this story.”

Pastor Zhuang gave two points that the congregation could learn from the story of the blind man.

1. Do not settle for the first touch. “When God touched the blind man for the first time, there was a breakthrough and he could see again. However, the man has not changed into the man God had intended him to be. His vision was still blurred. Similarly, God has a purpose for our lives, but if we are not careful, we may end up being satisfied with a blurred vision instead of a clear direction in life,” Pastor Zhuang taught.

“The first touch from God saved us; however, it is the second touch that will change us,” he continued. “It will change our habits, character, and nature. The blind man wanted a clear vision, a greater change in his life. He refused to settle for a blurred vision and he stayed for a second touch from God. As a result, his vision was eventually fully restored and he could see clearly.”

The pastor also raised the example of how Jacob wrestled with an angel of the Lord in Genesis 32:24-28. Even though the angel of the Lord had already touched the socket of Jacob’s hip, Jacob still refused to let go until he received His blessing. As a result, Jacob experienced not just a touch but a change: his name was changed to Israel, and his future was also transformed by that encounter.

2. Whatever God started, He will finish. “Sometimes, God comes into our lives and touches us for the first time,” said Pastor Zhuang. “However, He will come again a second time and finish His work in us. If your situation is improving but it is still not what you had expected, it means that God will come again to finish what He started.” 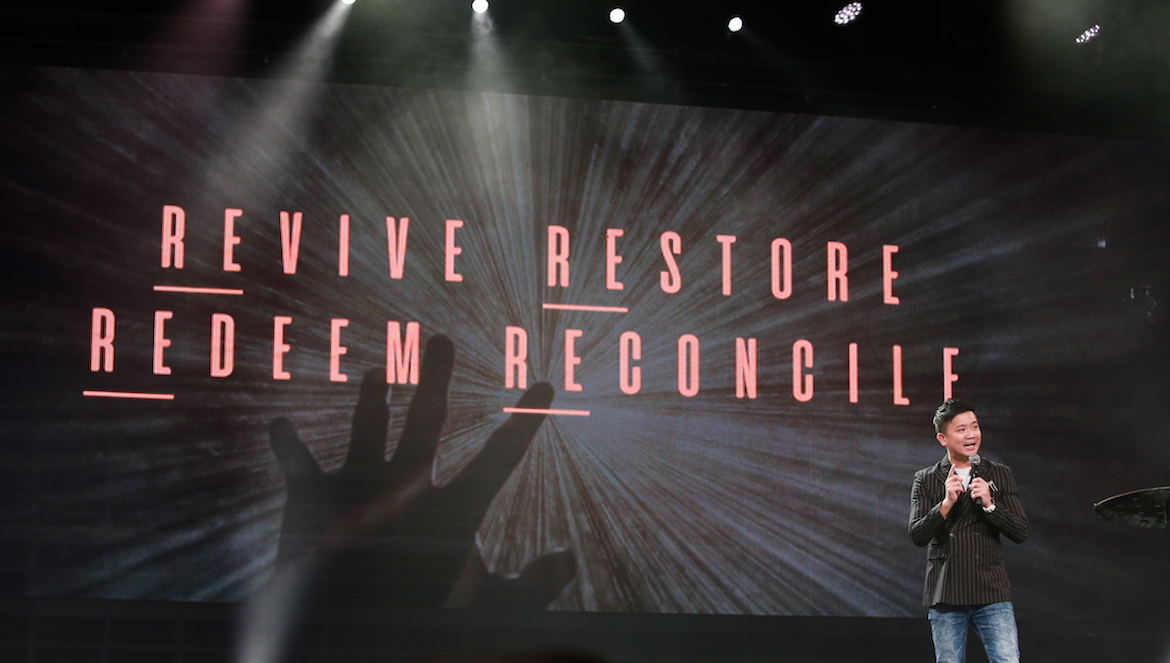 Pointing out that the word “restore” used in Mark 8 has the prefix “re” which means “again”, the pastor explained that God wants to revive, restore, redeem, and reconcile people. He gave an example of how the prophet Elijah once fled for his life because of the tyranny of Jezebel, the wife of King Ahab. At one point in time, he felt so tired and dejected that he contemplated killing himself. However, in 1 Kings 19:5-8, an angel of the Lord touched Elijah two times and brought food for him to eat so that he could replenish his energy.

“When God comes back the second time, He will bring us supernatural provision that we could not obtain on our own,” Pastor Zhuang taught.

Concluding the sermon with 1 Corinthians 13:12, he said, “There are things we go through in life that we cannot see clearly. We may not understand why we are going through them. However, God knows better than us, and one day, everything will make sense to us. God is a God of the second touch.”

At the end of the service, Pastor Zhuang gave an altar call for those who were seeking a breakthrough from God. Many responded to the altar call and were mightily touched by the presence of God.