The Cleansing Power Of The Blood: Bobby Chaw

After a quick recap of his sermon on The Wind Of The Holy Spirit, Bobby Chaw, executive pastor of City Harvest Church continued preaching on walking in the presence of God, taking his main text out of Numbers 19. He was preaching at the weekend service on Aug 3 and 4. He began by giving the context to Numbers 19: Israel was nearing the end of the wilderness journey; the journey had been plagued with frequent occurrence of death. The pastor explained that the deaths posed a problem because any contact with the dead makes a person unclean according to Mosaic law (Num 19:13, 20).

“When they are unclean, they defile the temple and tabernacle of the Lord,” explained the preacher. “How then can they walk in the presence of God when they are continuously surrounded by death?”

He further explained that even while the Holy Spirit is omnipresent, a relationship with the Holy Spirit can still be cut off. He illustrated his point with an example of a husband and wife who may be in the presence of each other in the same room but no longer have a good relationship.

THE WATER OF CLEANSING

Pastor Bobby then went on to explain what the water of cleansing is, as described in John 13:1-17. In verse 10, Jesus explained to Peter that when one is saved, one has “bathed” and is clean, but he nonetheless still needs to wash his feet as that is the part that is dirty. This, the pastor explained, means to constantly sanctify oneself from daily sins.

“Sanctification is a lifelong process,” stated Pastor Bobby. “Numbers 19 tells us that the children of Israel need to be sanctified by the water of cleansing.”

Pastor Bobby then brought the congregation through an examination of the makeup of the water of cleansing, by dissecting the verses in Numbers 19:1-5. The red heifer in the Scripture is a young cow. The priest had to burn the entire cow on the altar until it was reduced to ash. These ashes would then be mixed in water for cleansing.

The red heifer and the blood in the passage are images of the cleansing power of the blood; the blood is a symbol of both death and life. “So the blood of the red heifer is for the exchange of death for life,” concluded the pastor.

THERE IS POWER IN THE BLOOD
“I want to share with you the three things concerning the blood of Jesus,” said Pastor Bobby. “Firstly, the blood brings reconciliation.” He highlighted how everyone has “fall[en] short of the glory of God” (Rom 3:23) and is therefore in need of reconciliation. Romans 3:25 states that the only way for reconciliation is through an exchange of death for life, and that can only be done by faith. “Wrath has been taken on by the red heifer,” noted the pastor. “Likewise, as we walk through life, we can easily provoke God’s wrath. But Hebrews 10:19 tells us that we can boldly enter heaven’s Most Holy Place because of the blood of Jesus!”

The devil constantly lies to believers, telling them that God is accusing them because of their daily sins. “Don’t believe that lie! The blood of Christ has been shed, the wrath is not on them but on Jesus. So every day, do an exercise of renewing your mind.”

To close this point on the cleansing power of the blood, Pastor Bobby brought the congregation through Romans 6:11, which implored Christians to be dead to sin but alive to God. “Your second daily exercise is to consider yourself dead to sin and alive in God,” the pastor asserted to the congregation. “Because the greatest battle is fought in the mind—it is a lie that you are still in your old nature,” explained the pastor.

Thirdly, the blood brings sanctification. Pastor Bobby read from Hebrews 13:12 which stated his point. He explained that only Jesus can make a person holy and sanctify him because holiness is an attribute of God. The pastor pointed to the imperative to be holy as expressed in 1 Peter 1:15-16 and then explained that this requirement to be holy can only be done through sanctification, which is the impartation of holiness which only Jesus possesses. To support his assertion on sanctification, the pastor referenced 2 Peter 1:3-4 which spoke of God wants his people to be partakers of His divine nature.

“Your third daily exercise is to yield your members as instruments of righteousness as Paul said in Galatians 2:20.” The pastor then explained that sanctification is to be one with God.

“Now I have come to the main thing I want to share,” declared Pastor Bobby near the end of his sermon, which made the congregation laughed. He brought them to John 6:53-56, where Jesus told the disciples to “eat my flesh and drink my blood”, for whoever that does it will have eternal life.

On the idea of drinking blood, the pastor explained that water has two uses: washing and consumption. “When drinking for consumption, it refreshes you. If you do not wash, you do not live a clean life. But if you do not drink, you die,” he elaborated. “The blood of Jesus is like water!”

He then explained that the purpose of the blood is to revitalize one with new life, as the eternal life is sustained by supernatural food (John 6:54).

“Jesus was Word becoming flesh,” he said. “He is the perfect example of eternal life, so whoever partakes of Him has eternal life.” Reading Matthew 28:18 and Mark 16:17-18, he explained that Jesus was so confident about making assertions because the same life and nature that He had has been given to everyone. At this point, Pastor Bobby shared his personal testimony: he was suffering from kidney failure from the time he was 4. His grandmother gave him many different concoctions to try to keep him alive. When he accepted Christ at the age of 16, he became the healthiest person in his family, to the point of becoming a physical training instructor in the army.

At the end of the service, Pastor Bobby led the congregation to take Holy Communion. He reminded the church, “Holy communion is a reminder of the partaking of the nature of God.” 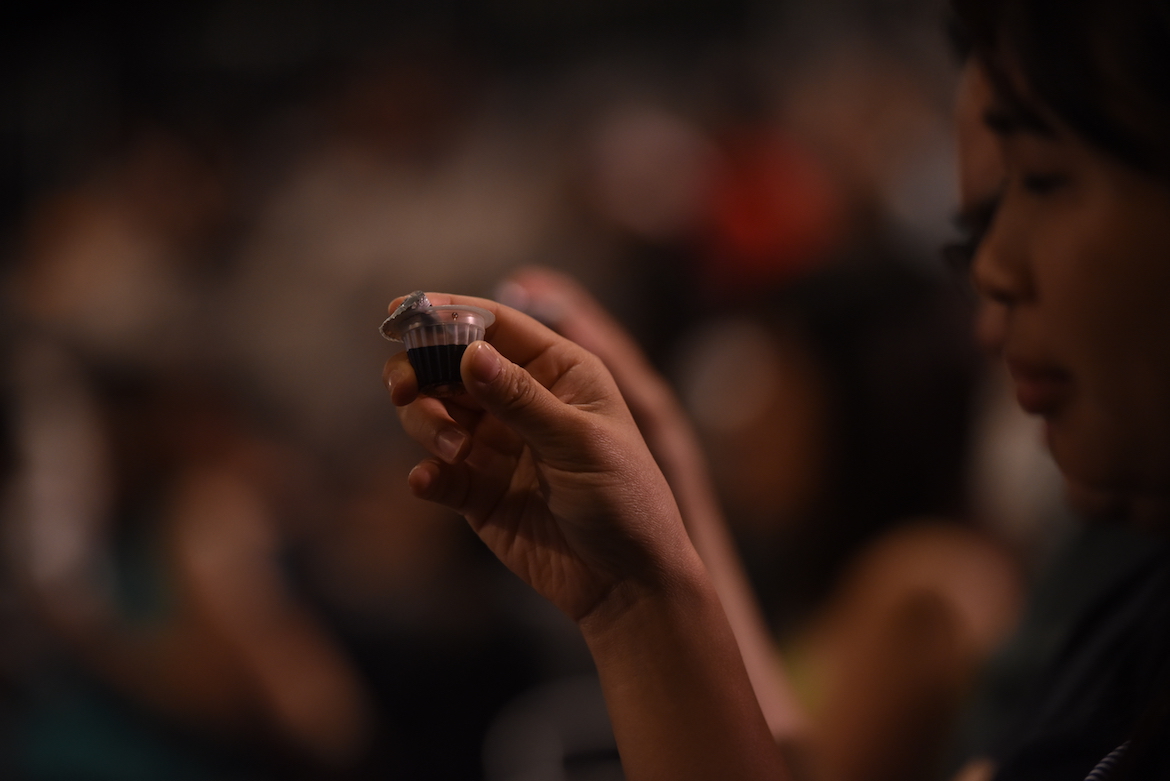