A Christian without a church is a contradiction: all believers belong in God’s household with other Christians. In his weekend message, Choong Tsih-Ming encouraged the congregation to build lasting relationships with one another.

When City Harvest Church pastor Choong Tsih-Ming took the stage on the weekend of May 4 and 5, the first thing he did was to extend a warm welcome to all the new faces in the church, many of whom received salvation two weeks back during the Easter weekend.

He began his sermon by reading Ephesians 2:19, which tells Christians that the church is God’s family on earth and that they belong in this family. He also read Psalms 92:13, saying that when one chooses to stay in a church, he will grow healthily. 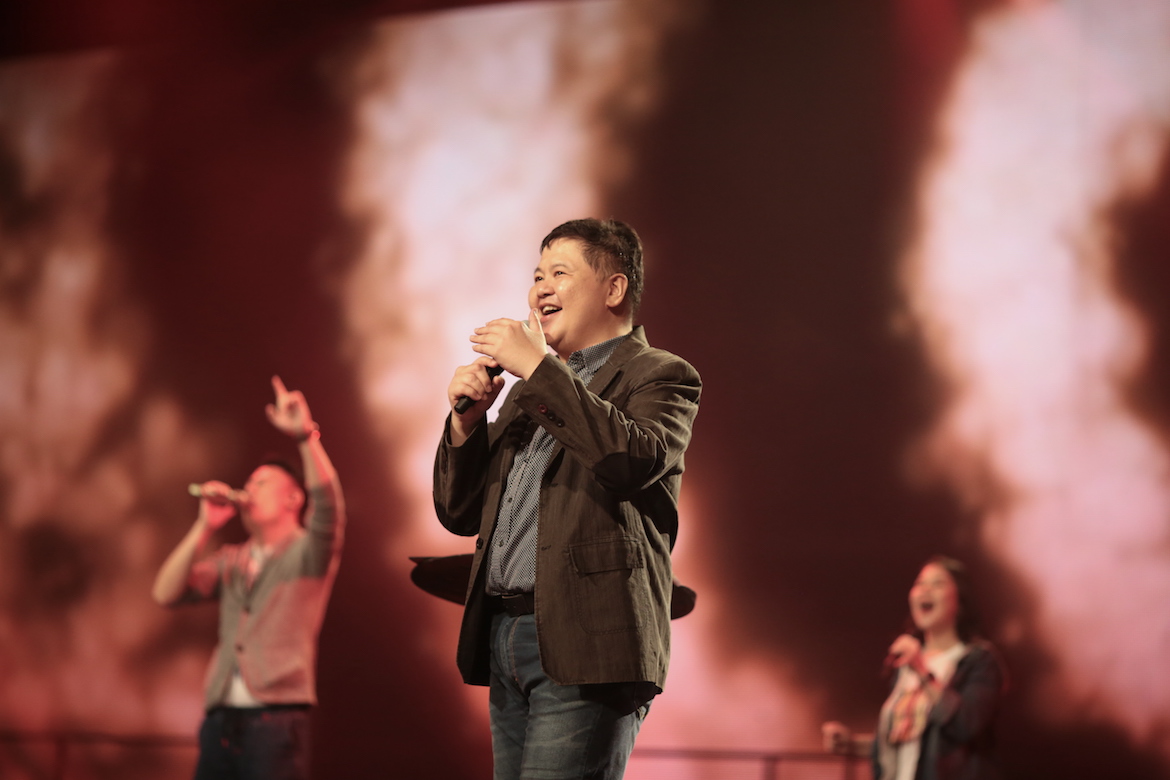 “Belonging to a family is vital for the development of your emotional health and overall well-being,” said Pastor Ming. That is why a Christian without a church family is a contradiction. In fact, there are over 30 instructions in the New Testament that a Christian will not be able to fulfil if he does not belong to a local church.

BE COMMITTED TO A LOCAL CHURCH
How then can one be a member of a local church? By committing to other Christians, the pastor taught.

Using the studies of famous research professor and TED speaker Brené Brown, Pastor Ming shared that the core and root of a human being is to feel connected. That is how God made Man to be.

Why then do people tend not to be connected? The answer, according to Professor Brown, is shame.

“Shame is asking if there is something about you that is wrong,” described the pastor. “You’re afraid that when others find out about you, you will not be worthy of connection. So, no matter what situation you’re in, you fear that you are not up to that standard.”

In her study, Professor Brown found that everyone has experienced shame. There is, however, two different responses to shame: one was to stay in shame and the other was to come out of shame. Her research also showed that when people choose to come out of their shame and be vulnerable, they will eventually find love, belonging, joy, empathy and creativity. Those who are willing to risk exposing their emotions and share their story will ultimately find a sense of worthiness, even if they still feel shameful.

“Brené Brown said that worthiness is the belief that one deserves to be loved,” explained Pastor Ming. “That is similar to what Christians would say—that they are deeply loved by God.”

In the study, those who were able to tell their life’s story with vulnerability showed one thing: authenticity. Pastor Ming defined authenticity as “letting go of who you think you should be to be who you really are.”

He reminded the church that the DNA of CHC is to be kind and loving Christians, and not judgmental when someone shares his story and soul. The pastor encouraged the congregation to be vulnerable with one another, as “what makes you vulnerable makes you beautiful.”

When Christians find that acceptance, they become “living stones”, as it says in 1 Peter 2:4-5.

LIVING STONES IN THE HOUSE OF GOD
A spiritual house is built by living stones, but the Bible also talks about another kind of house in Genesis 11:3. That house was the Tower of Babel. Drawing a comparison between the two houses, Pastor Ming noted that the spiritual house of God is not perfect—every living stone comes in different shapes and sizes. Even though there is a structure, there are holes in between the stones that water can flow through and into. This reflects the fact that in the house of God there is always flexibility and freedom for the Holy Spirit to move.

The Tower of Babel, on the other hand, was “perfect”—all the bricks aligned precisely and tightly. But such a building was also fixed and rigid. The pastor stressed the church has to be flexible so as to let the Holy Spirit move.

“There are members who ask me, ‘If I go missing, nobody will notice right?’ Yes, not everyone will notice, but the stones around you will surely notice there is a hole in the wall,” Pastor Ming pointed out. “And the owner of the house will notice too. God is the owner of the spiritual house. He will know you are missing and He will pursue after you, just like in the parable of the missing sheep.”

As a living stone in the house of God, there is a need to relate to other stones. Therefore, Christians need to build covenantal relationships in the church.

A STUDY OF TWO RELATIONSHIPS
Pastor Ming illustrated a covenantal relationship by contrasting it with one that wasn’t.

The first relationship is found in John 13:18-30. Here,  Jesus was having the last Passover supper with His disciples when He told them that one of them would betray Him.

“In John 13:28, no disciple knew why Jesus told Judas to do what he needed to do quickly,” noted Pastor Ming. “Because even though Jesus knew that Judas would betray Him, He never said a word to the other disciples.”

Judas, however, had a different spirit than Jesus and the other apostles. He wanted intimacy with Jesus—without covenant. Pastor Ming explained that Judas could have just pointed Jesus out by describing His appearance, yet he went up to Him and kissed Him. “Why? Because he wanted that intimacy with Jesus. And after he got what he wanted, he sold Jesus out.”

The “Judas spirit” is such that a person comes to a relationship as a consumer and not a contributor—such as the person who come to criticize the church and not to receive.

Reading from 1 Samuel 18:3-4,  the pastor noted that because of the covenant that David made to Jonathan, he sought out Jonathan’s son Mephibosheth after Jonathan died, and took care of him. 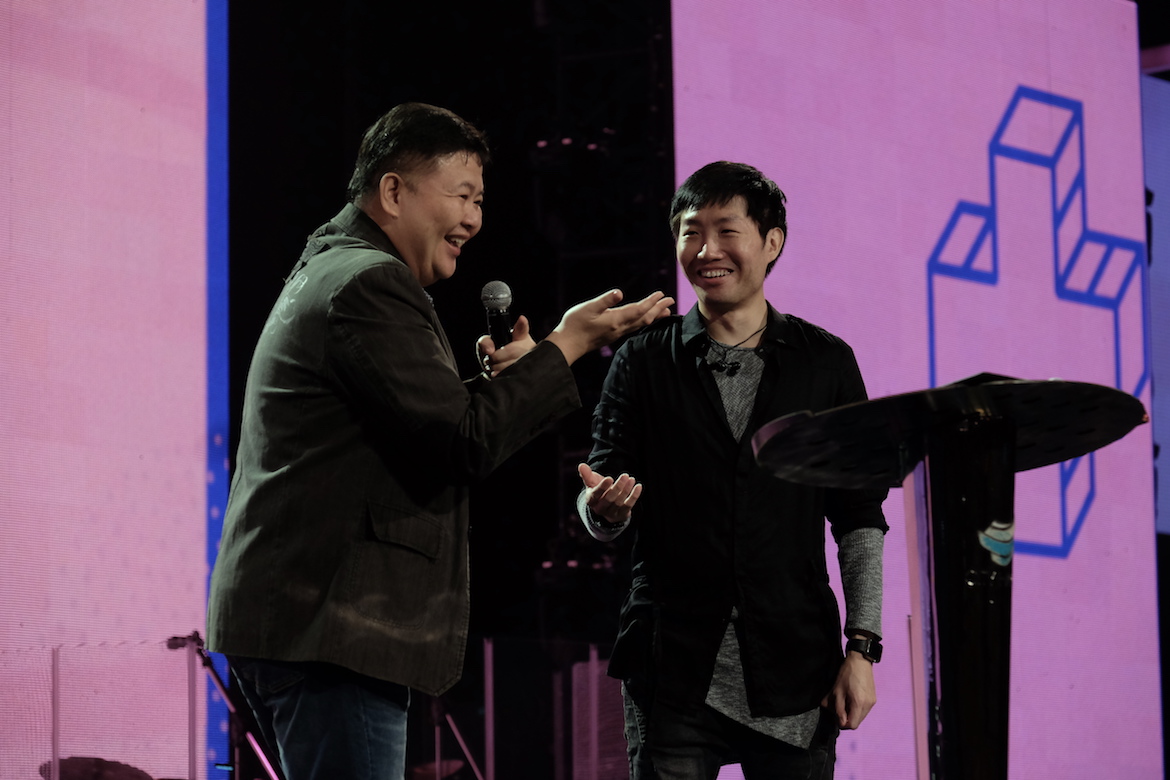 Pastor Ming demonstrating how David and Jonathan made their covenantal pact.

The verses also showed the steps David and Jonathan took to solemnize their covenantal relationship in the Old Testament. Firstly, each man handed their outer garment to the other, indicating a shared identity. Secondly, they exchanged weapons, pledging their dependence on each other’s defence. Lastly, they cut themselves on the wrist in a manner that when it healed, there would a scar.  Then, they joined their hands at the wrists where the blood intermingled. The modern day version of this blood pact is the handshake.

The pastor told the congregation that these three steps represent a beautiful covenant Christians have with Jesus.  Jesus pledged His Word as our defense. In the case of Judas, because Jesus treasured His covenantal relationship with him, He never exposed Judas.

“Do you have a David-Jonathan kind of relationship in church?” asked Pastor Ming before giving the example of his own covenantal relationship with the church’s senior pastor Kong Hee and his wife, Sun. Pastor Ming was one of the three very first members of the cell group led by Pastor Kong, that eventually became City Harvest Church.

For the youths, he encouraged them to do activities together. He said that shared experiences, like going to youth camps, give them the first step to building these relationships. He encouraged them to “go the extra mile, help those who are weaker than you.”

To those who have been in church for some years, Pastor Ming expressed his understanding that the busyness of life, disappointment, betrayal and heartaches may have caused some members to break covenantal relationships. But he encouraged them to rebuild those relationships.

“The only people who can hurt you are people you love,” he said. “So when you say you won’t let others hurt you again, you’re also saying you will never love again. To love again is to be vulnerable again, to take off your armor and weapon, and connect again.”

In closing,  Choong asked the church to declare the eight blessings of covenantal relationship over themselves.

A Christian’s truest identity is found in Christ loving him—and every believer is called to be a living example of belonging to other believers. The service ended with church members praying wholeheartedly for each other. 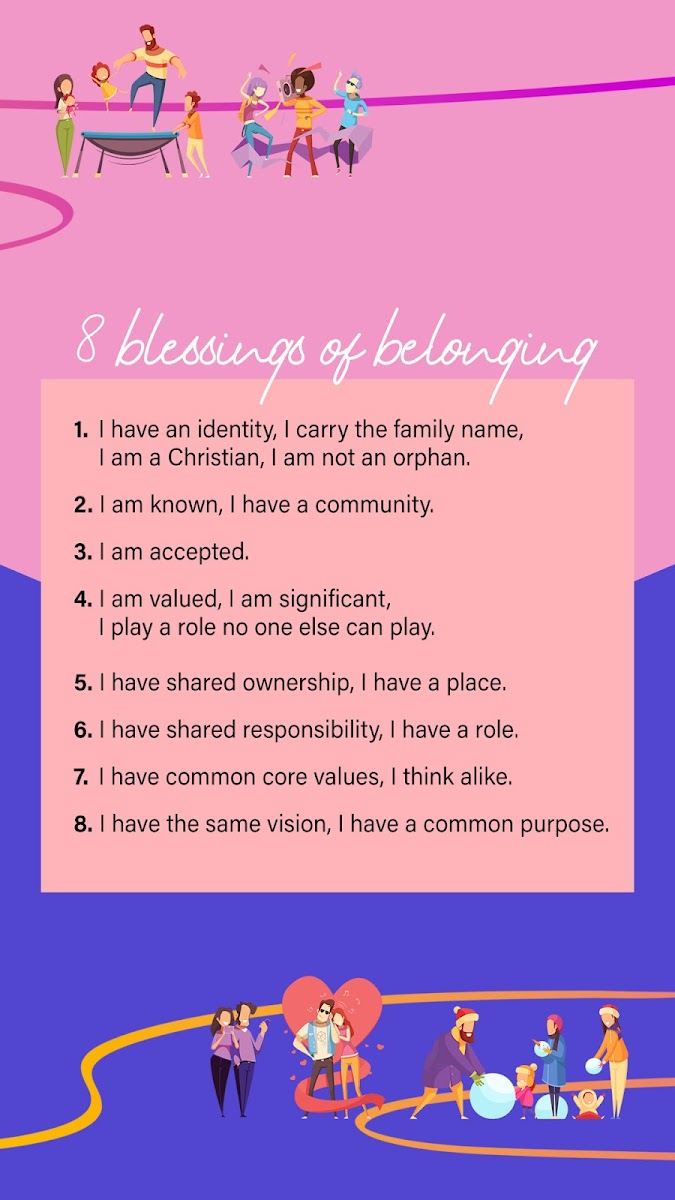