“The fear of the Lord is the beginning of wisdom.” Drawing from Psalm 111:10, Pastor Bobby Chaw preached on the wisdom of getting wisdom. 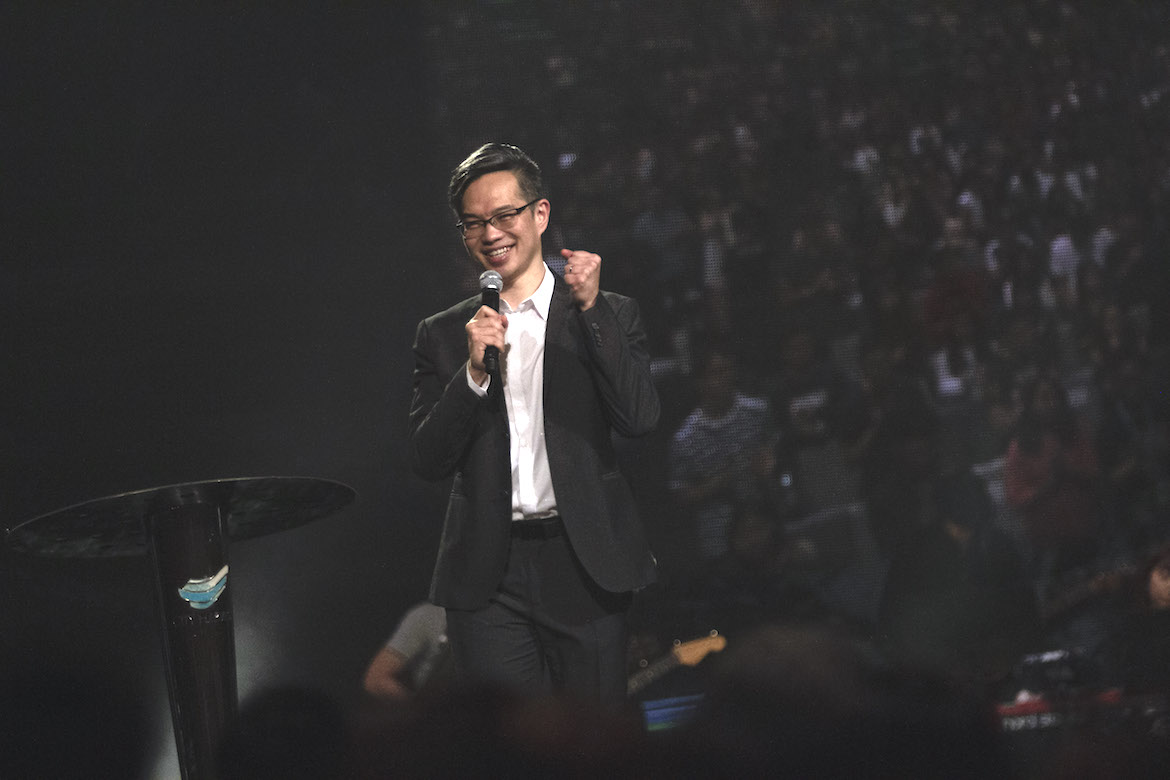 On the weekend of 18-19 January Bobby Chaw, executive pastor of City Harvest Church, continued with his series on the book of Numbers 17. Pastor Bobby has been teaching out of Numbers the past year, and felt that the lessons to be learned from this chapter were fitting for the start of the year.

Following Numbers 16, in which the Israelites grumbled and were dissatisfied with God’s anointed one, in Numbers 17:5, God wanted to end their complaints. When the people saw the phenomena of how the rod of Aaron came alive and produced almonds (Numbers 17:8), they became fearful and believed they could not go near the tabernacle for they had offended God.

“This is our typical spiritual experience,” highlighted Pastor Bobby. More often than not, when believers discover they have make a mistake, they become fearful of God, withdrawing themselves from the presence of God. This, said the pastor, is the very opposite of the “fear of the Lord”, which is respect for God.

He reminded the congregation that in judgment, God always remembers mercy (Exodus 34:6-7) and that it is crucial for every believer to have a good understanding of who God is.

ESTABLISH THE FEAR OF THE LORD

“Wisdom is better than cleverness,” he said. “A person can be clever but not wise. Wisdom is more than knowledge.” Wisdom is the art of living: the ability to live right and not let one’s life drift into ill-fated chaos but to live life with substance and direction.

“Experiences and age do not guarantee wisdom; it is the fear of the Lord that is the beginning of it”, he reminded the people as he brought them into a study of the life of the wisest man who ever lived: King Solomon.

In 1 Kings 3:7-9, in a “genie in the lamp” moment where God offered to grant him any wish he asked for, Solomon did not ask for honor, victory or long life—he asked for wisdom to lead his people. The Bible says that God was pleased with his answer, and granted him not just wisdom but all the riches and success that came with it.

WHAT LESSONS CAN WE LEARN FROM SOLOMON?

First, said Pastor Bobby, Solomon did not presume to be wise. In 1 Kings 3:7, Solomon confessed that he was “he was only a child and did not know how carry out my duties”. He asked the Lord to give him wisdom.

“Wisdom says nobody is already wise, but we may only becomewise”, said Pastor Bobby to the congregation. He added that one may get wisdom by asking it from God with empty hands stretched out to heaven.

The pastor then shared that, during his personal quiet time, he was reading through the book of Samuel about David, and he was touched by David’s attitude and his way of living in 2 Samuel 5. David did not assume how to fight but he inquired of the Lord what he should do (2 Samuel 5:18-19). He had already won one battle against the Philistines, but instead of falling back to the same strategy when the Philistines came up against him and his men again in the same place in 2 Samuel 5: 22-23, David once again inquired of the Lord, who gave him a new strategy. David’s army earned a resounding victory.

Despite David being in the same circumstance twice, he did not take it for granted that he knew what to do. Instead, he looked to God for help.

“Make it a point to inquire of the Lord,” Pastor Bobby urged the people. “Come to the Lord with an attitude of a child—that is the beginning of wisdom.”

Secondly, Solomon asked for things for others. In 1 Kings 3:8-9, Solomon knew that to be king was his divine appointment, to reign was his duty, and he knew that his entire life was a service for the good of his people and the people of God.

“We are called to be servants of the living God. To serve not for our good, but for the good of His people.” Pastor Bobby reminded the congregation.

Wisdom comes when one constantly asks God what to do to serve the people and how to serve others best. 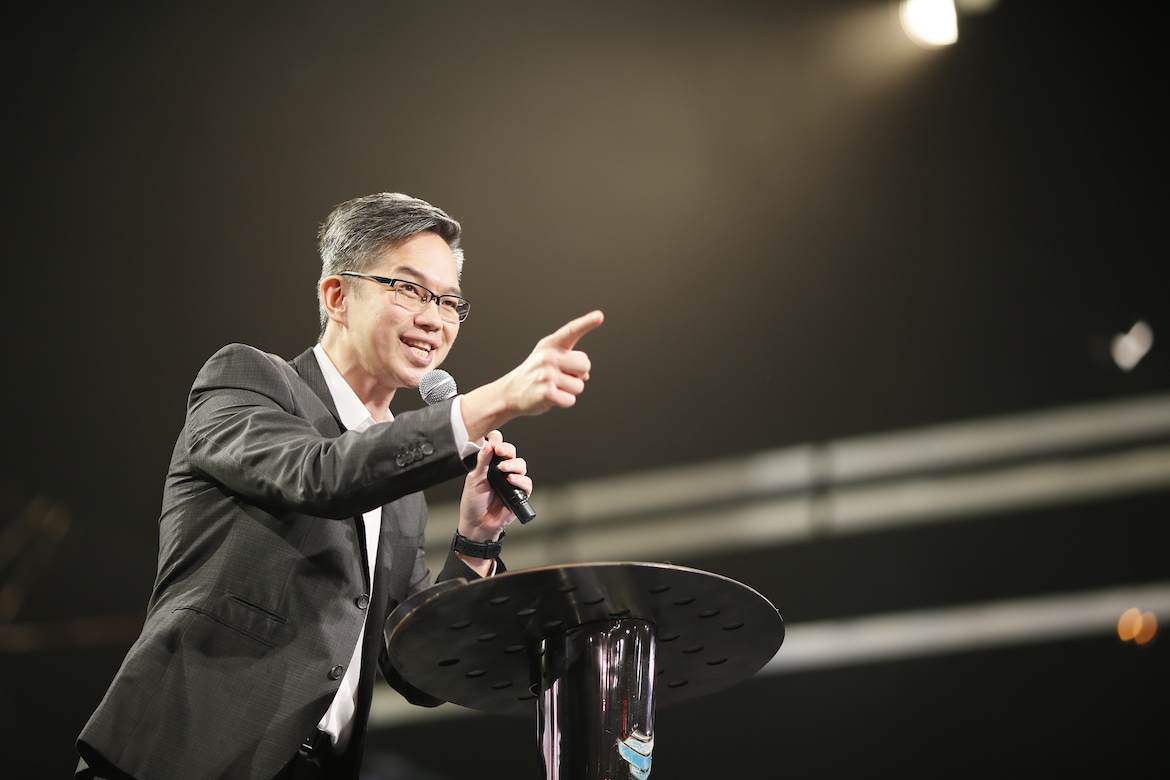 Thirdly, Solomon asked for the ability to discern between good and evil (1 Kings 3:9). Matthew 6:33 clearly states the priority in life and that is to seek God’s kingdom first.

Exercising discernment is important if believers of Christ want their lives to be a blessing to others. “If not, we would keep doing and saying the wrong things to the wrong people at the wrong time,” Pastor Bobby told the congregation.

Exemplifying this point with the story of the five foolish virgins in Matthew 25:8-10, the pastor pointed out that if one does not have discernment and gets their priorities wrong, they might miss out on the key things in life. Pastor Bobby urged the church that it is important to keep reaching out to God in prayer and worship, and to ask for a discerning heart. One should not be too sure of themselves, or they could be like the foolish virgins who missed the arrival of the bridegroom because they neglected to bring extra oil for their lamps.

In the Old Testament, the word “šâma’” also means “to obey”. To have an understanding heart is to also have an obeying heart.

“We can have deep theology but if we cannot obey, then the word means nothing,” Pastor Bobby said, encouraging the people to listen to James 1:22 and be doers of the Word. When believers of Christ listen to God’s voice in everything they do and everywhere they go, that is the beginning of true wisdom (Proverbs 3:5-6 MSG).

WHAT IS THE FEAR OF THE LORD?

The fear of the Lord is different from the fear that comes with anxiety, worry, lack, failure, and death that drives one away from the presence of God, as seen in Numbers 17:12-13.

True fear of the Lord is the reverence towards God, a fear that gives one the desire to obey God (Psalms 111:1, 4, 5-7, 9-10). The revelation that God is a good God, He remains faithful when one is faithless, and He never lets His people go even when they do—that is the fear of the Lord.

In closing, Pastor Bobby encouraged the people to be like Solomon: to ask for a discerning heart to do His will and to always look to the Lord, for the Word of the Lord is “a lamp unto my feet, and a light unto my path.”