Children from Harvest Kidz visited the elderly folks at Toa Payoh during the recent school holidays to bring them some Christmas cheer.

What do Singaporean kids do during the year-end school holidays? Those who attend City Harvest Church’s Harvest Kidz spend their time visiting the elderly. Bright and early on a Thursday morning (Dec 13, 2018), 26 children from Harvest Kidz gathered at Suntec Singapore with one mission in mind: to touch the lives of elderly folks by visiting them and holding a special Christmas party for them.

These children were part of a bridging program organized by Harvest Kidz and CHC’s Dialect Service. The aim was connect the young ones with the Silver Generation and to teach the children compassion and selflessness through serving.

Studies done by the National Health Service in the UK have shown that  befriending programmes where young people interact with the elderly yield positive results in the mental well-being of the elderly.

“The idea of bridging program came about when I was having a conversation with Pastor Bobby (Chaw, CHC’s executive pastor) about the fact that the church congregation is growing older,” said Joanna Sin, a pastoral supervisor with Harvest Kidz. “I hope that the kids will have a heart for the elderly and understand that the elderly are not difficult to engage. This is important as Singapore is an aging population.”

PREPARING TO SERVE WITH LOVE

“I want to bring the elderly joy,” said one young girl when her teacher asked the children what they wanted to achieve that day.

The first activity of the day was a sharing session with Dialect Service pastor, Maria Tok. During praise and worship, some of the children were jumping and dancing to the songs and lifting their hands in worship. 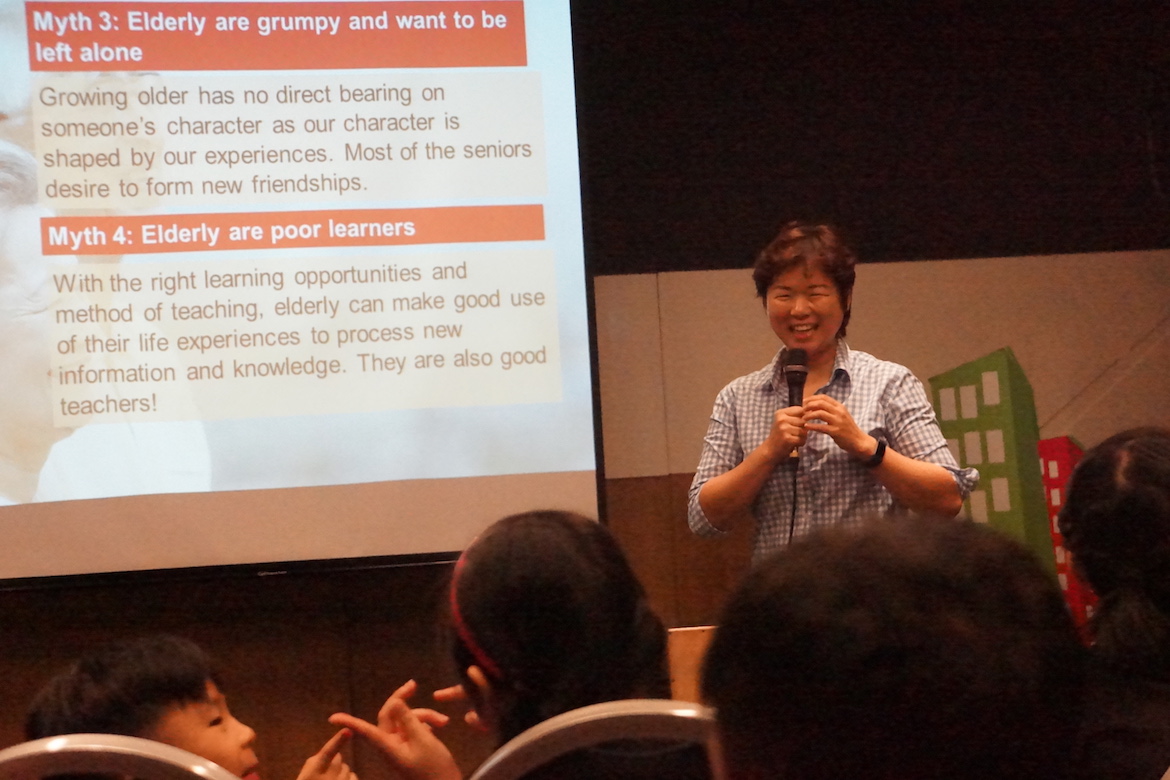 Speaking on the topic “Love The Elderly”, Pastor Maria set out to debunk a few myths about elderly people, such as the belief that they are very grumpy or that they suffer from many illnesses. Her message to the children aimed to open the minds of the young ones so that they would know how to interact with the elderly. Teaching the children what to say, Pastor Maria reminded them that they should tell the elderly that Jesus loves them. 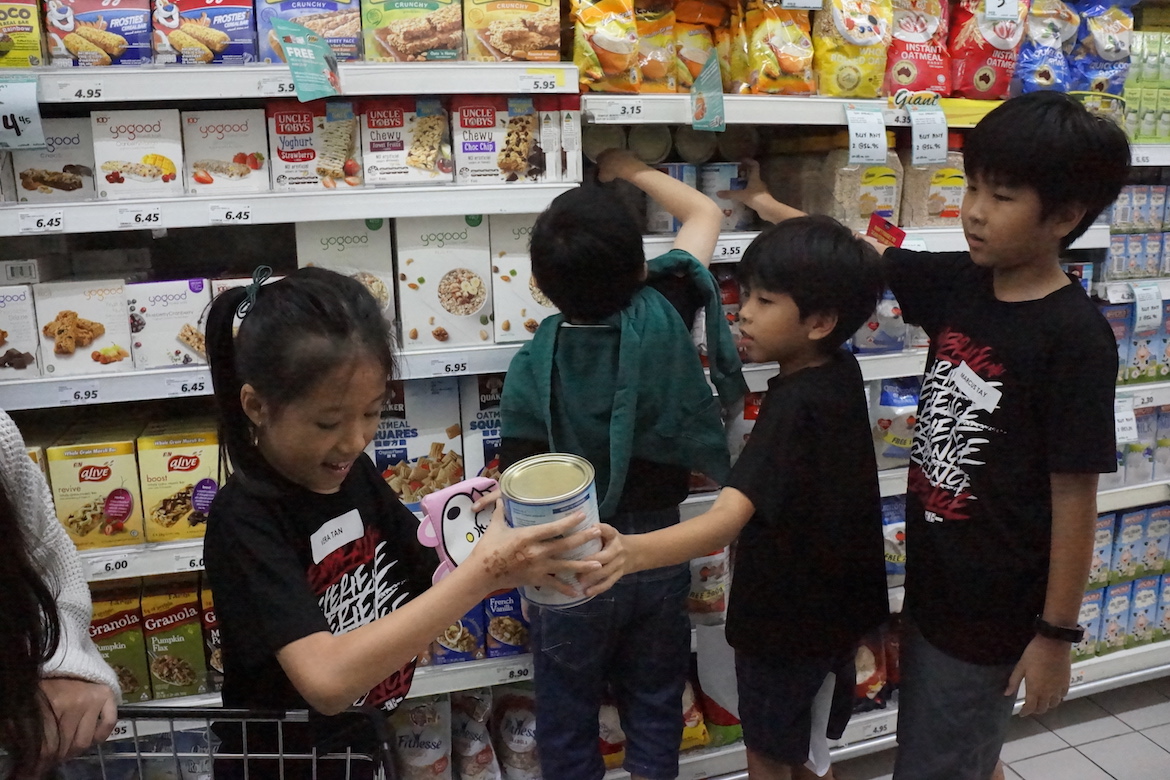 When the children heard that they were going to buy snacks to make goodie bags, they were all smiles. Among the many things the children bought were instant coffee packs, rice and potato chips. They also chose a kettle, a slow cooker and a standing fan as prizes for a lucky draw that the elderly could win.

The other team got busy practicing four songs they were putting up with some children playing tambourines, shakers, and the violin and the teachers playing guitar and cajón to accompany the singing. 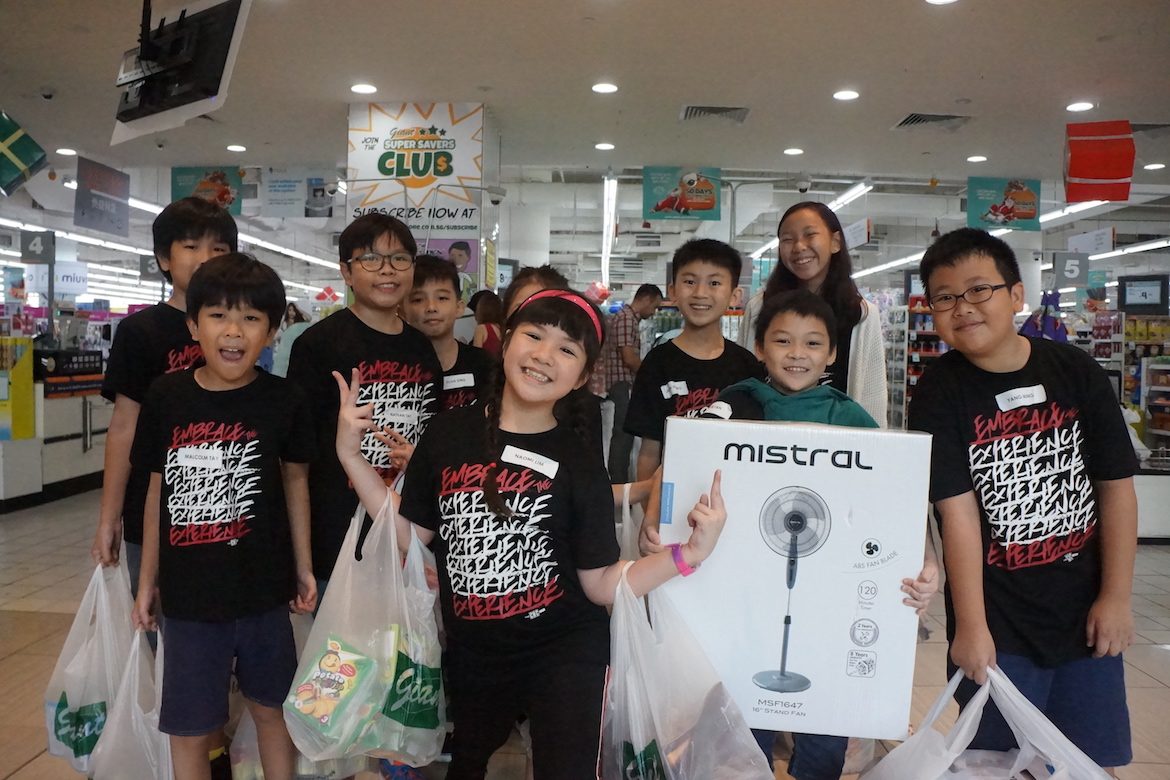 At one of the units, a teacher explained to an elderly man that she would speak on the kids’ behalf because they could not speak Chinese fluently. He gave them a smile and replied in Mandarin, “That is all right. It is their effort of coming down here that makes me happy.” 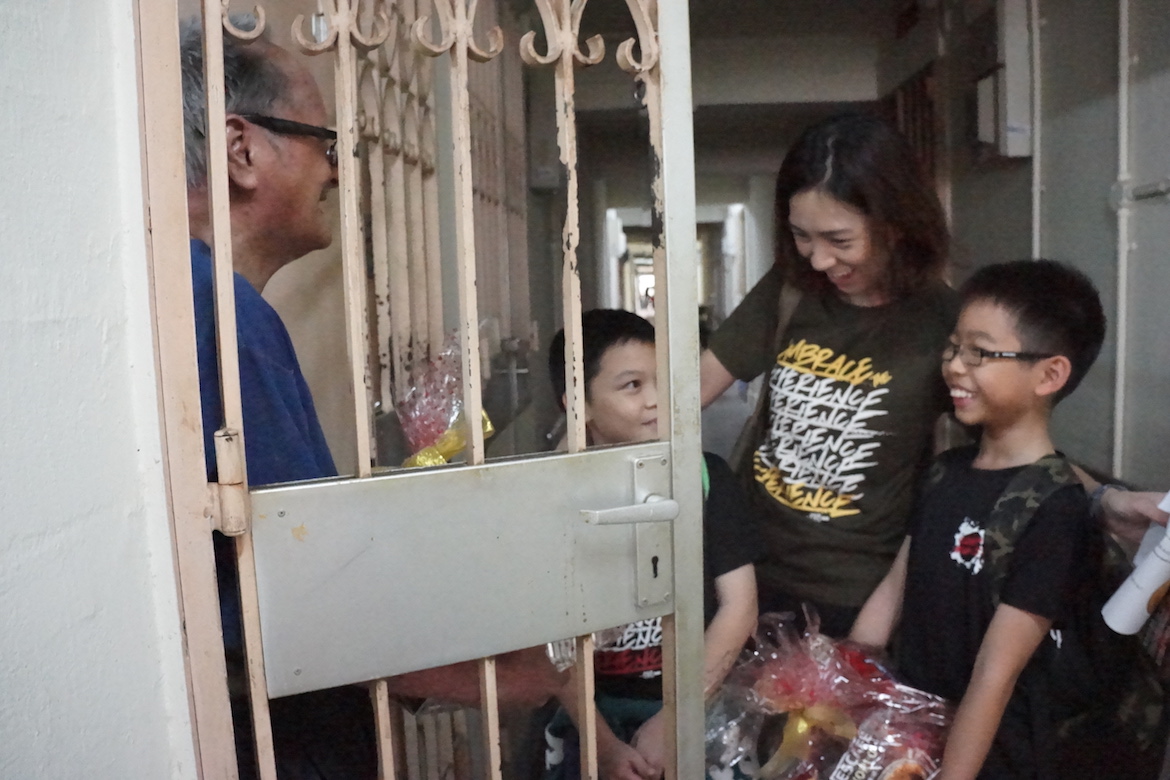 While the first team visited the elderly residents, the second team rehearsed at the community center where the Christmas party was held. Once everyone gathered and the elderly guests were seated, Pastor Maria began to share the good news of Christmas and salvation. She explained that the birth of Jesus brought hope to the human race because He went to the Cross to bring salvation. 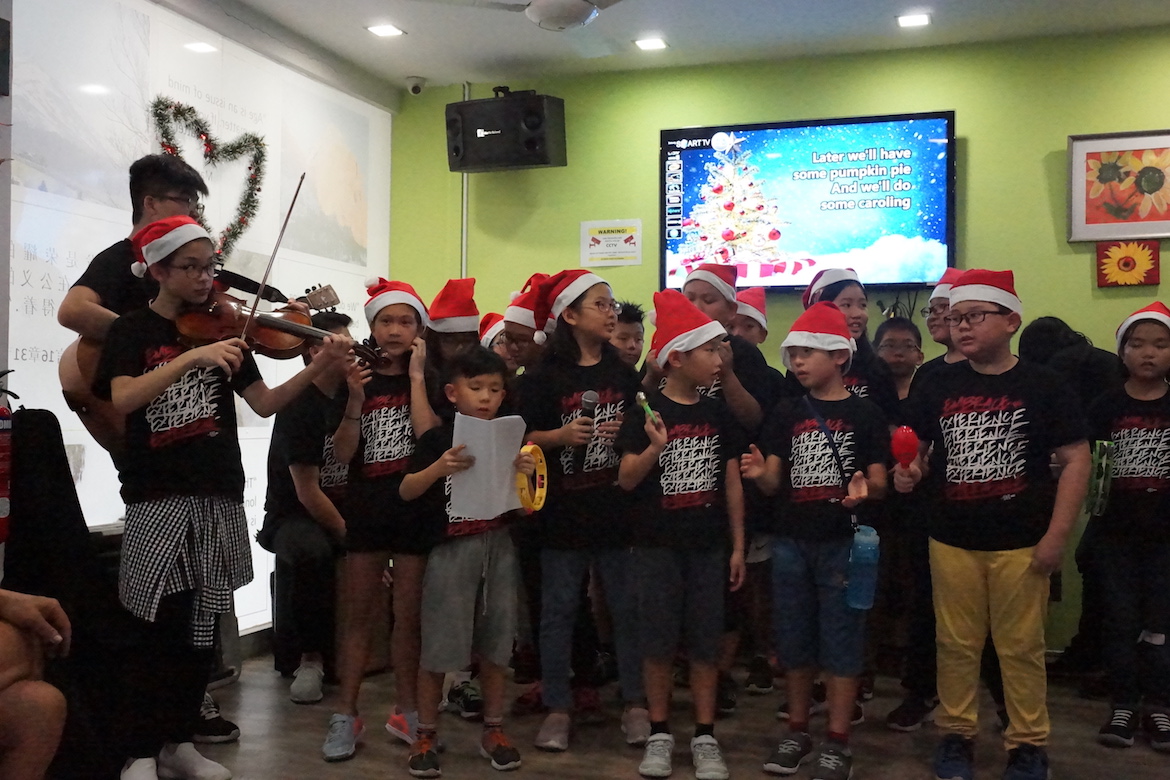 At the end of the event, lucky draw winners were picked. One of the winners was seen tearing up with joy when she won a slow cooker. When the program ended, the kids went back to Suntec Singapore, tired but satisfied. 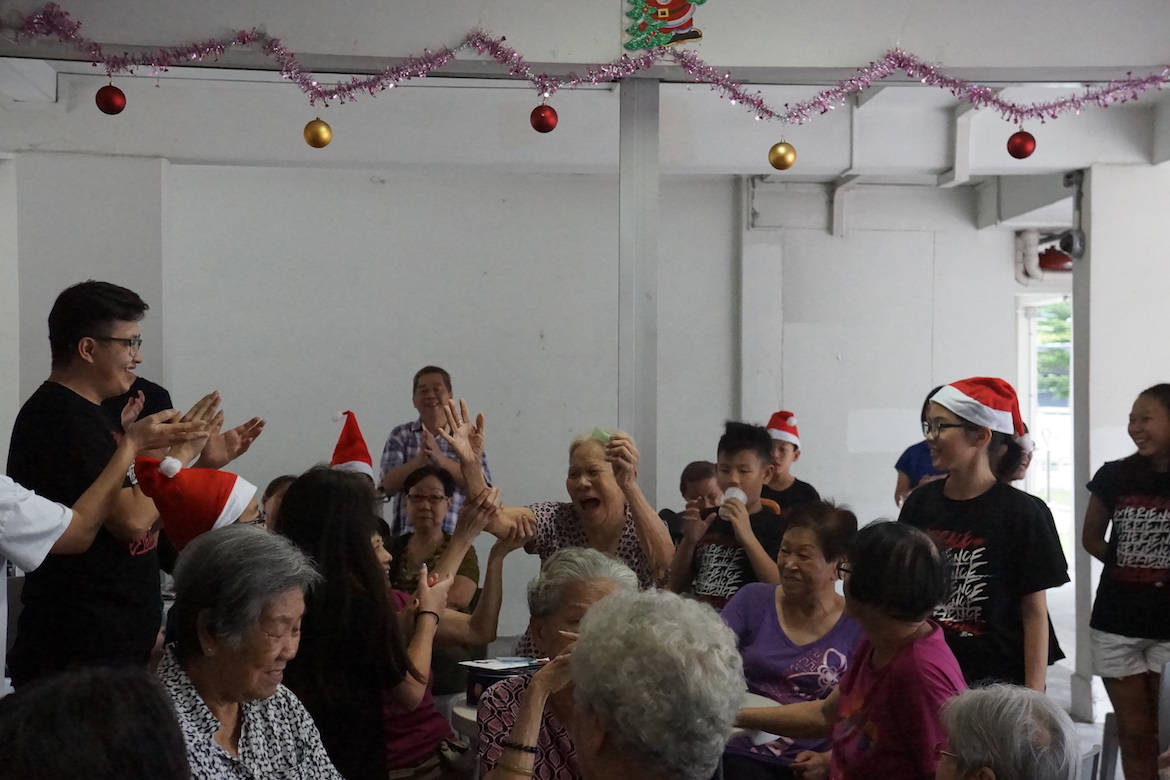 Ennabelle Tan, 11, a student who played the violin, shared her thoughts on the day’s events. “Honestly, I expected the elderly to be ignoring us. But that changed when I saw them looking so happy to be with us. It’s exciting to see them being contented and it makes me happy as well. They received prizes even though they didn’t earn it and I think that also taught them a little about the unconditional love of God.” 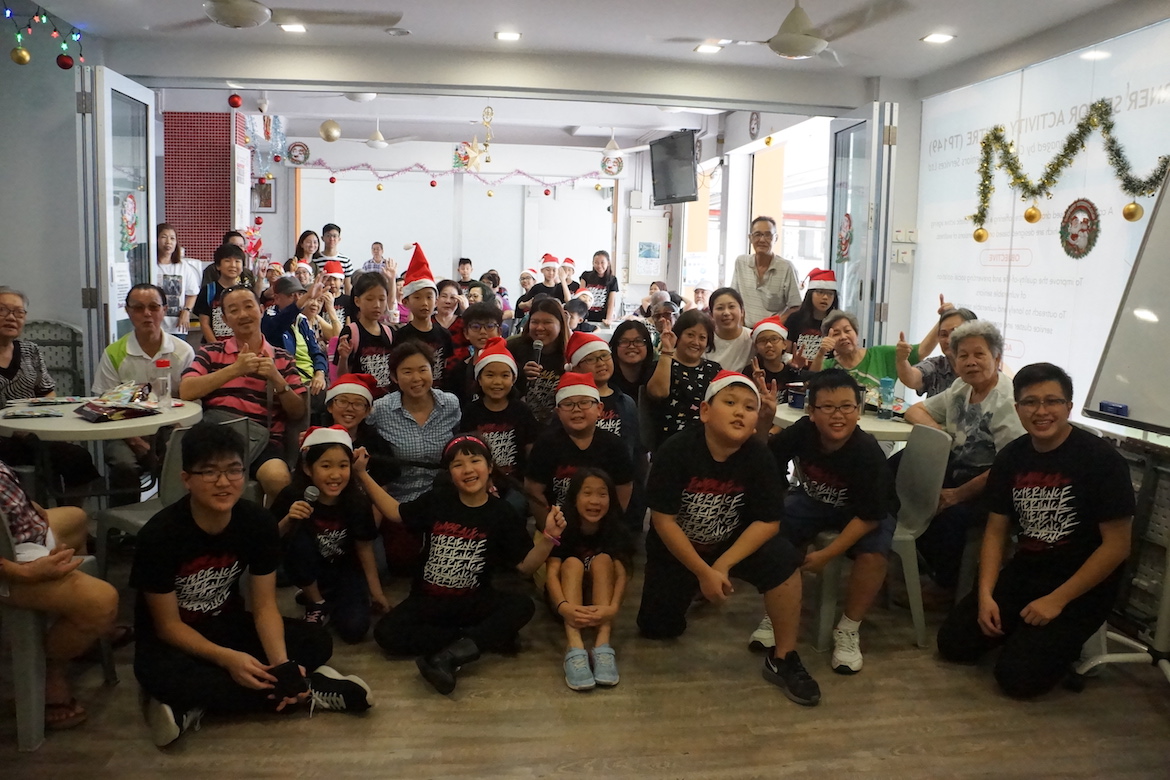