How To Selah With God: Aries Zulkarnain

At the first weekend service of 2019, Pastor Aries Zulkarnain shared a message that encouraged the congregation to make room for God and live a life of prayer and devotion. With every new year comes new resolutions and new changes. However, it is easy to mistake the novelty of doing something new for growth.

At the first weekend of the year, Aries Zulkarnain, executive pastor of City Harvest Church, reminded the congregation that growth comes with aligning oneself with God.

Quoting Isaiah 40:31, Pastor Aries expounded, “We need growth, not just change. Maybe we don’t need ‘new’, but we need ‘renew’! To grow, we need to learn to stay in waiting.”

He offered a different perspective: instead of seeking a new assignment in the new year, one can choose to do his current assignment with a new anointing. Destiny and breakthrough are often wrapped behind a routine, said the pastor. Growth is not found in change, but in consistency.

TO SELAH WITH GOD
Using the illustration of the Shunammite woman in 2 Kings 4:8-16, Pastor Aries went on to teach about the concept of selah, a Hebrew word often translated as “pause”.

In the story of the Shunammite woman, Elisha passed by the woman’s house regularly. Yet it was only when she stopped being busy and made a room available for him to dwell in that he prophesied over her life. This applies to the believer’s life as well: when one is always busy, one may miss hearing the voice of God.

Pastor Aries exhorted the members to “pray until we hear from the Lord, not until He speaks to us, for He is speaking every day!”

The Shunammite woman renovated a room for Elisha in her house; the pastor likened it to Christians rebuilding their altars before the Lord. Each piece of furniture she added depicted a different aspect of one’s relationship with God.

The bed illustrates one’s faith to rest in God. The table signifies fellowship and communion with the Lord. The chair is a picture of worship with the Father, while the lampstand depicts the light of revelation from the Word of God.

WHAT SUCCESS SHOULD DO FOR YOU
Focusing on the bed, Pastor Aries shared, “Your faith to rest [in God] will ensure that your faith at work works! While our work is not our identity, it expresses our identity in God and our relationship with Him.”

Just as God made Adam in the garden of Eden and set him to work, the work that God gives to us should express our identity in God.

The pastor gave the example of David. While he was anointed as king at a young age, he had to work in the palace before he reigned as king. King Saul, who was his boss, often sought to kill him out of jealousy.

“How many of you know that that is a terrible situation to be working in?” was Pastor Aries’ rhetorical question. “Yet David performed well, even when he was not treated well. Because his relationship with God was healthy.” 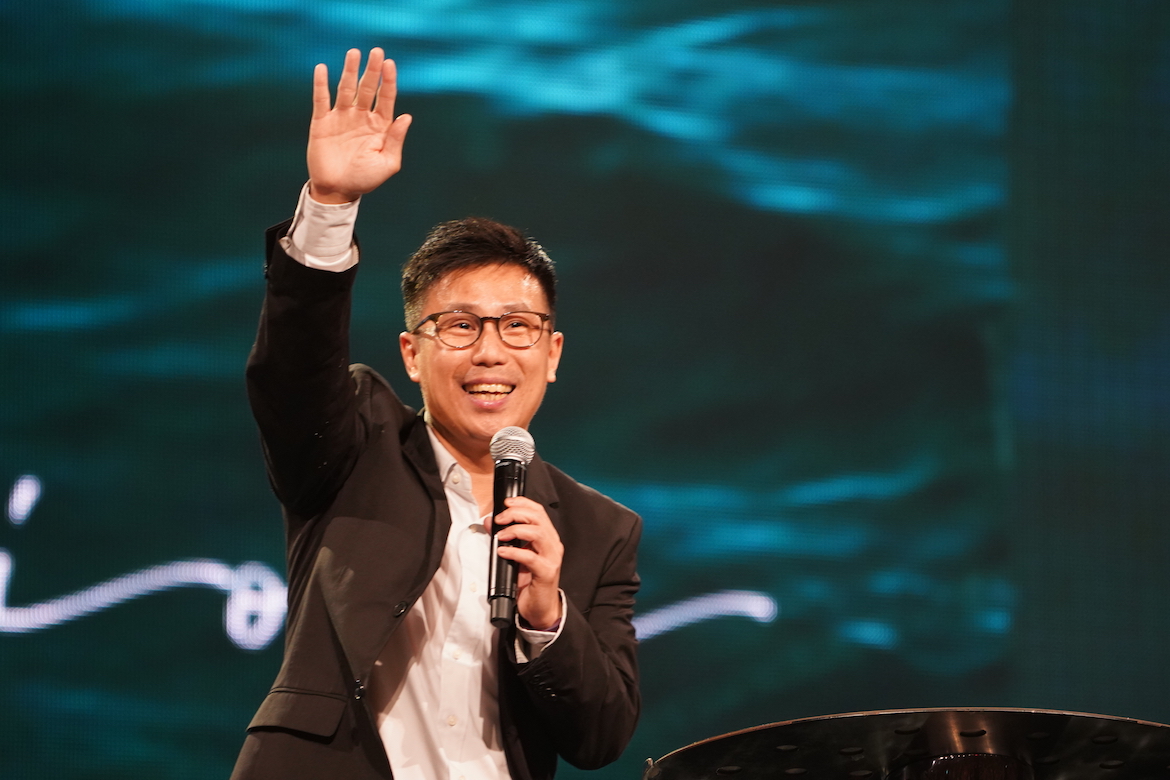 In 1 Samuel, King Saul wanted to establish his status as king, yet he chased after his enemies instead of God. Success doesn’t necessarily bring one closer to God. Pastor Aries illustrated his with his personal testimony.

Back in 1995, Pastor Aries asked the Lord for a big contract for his family business in Indonesia, which was facing difficulties. God responded and he was awarded a contract with the global sports brand Kappa to supply garment labels for three football teams that Kappa was sponsoring. This contract saved the family business from bankruptcy.

But instead of drawing closer to God and affirming those blessings he had received, Pastor Aries became giddy with success and backslided from the Lord in that season. It took CHC’s senior pastor, Kong Hee, flying to Indonesia to talk to him that turned Pastor Aries’ faith around; he eventually returned to the church in Singapore, and he has not left since.

“If the blessings I receive don’t affirm my loyalty to God but embolden me to drift further from Him, those blessings are not a blessing,” he asserted.

King Saul had two major successes, winning battles against the Philistines (1 Samuel 13:11-14) and the Amalekites (1 Samuel 15:19-20). Saul still performed well as a king, but he was no longer doing it with a heart of honor. Instead, he went against the commandments of God and did what he saw fit for the situation. Though his military strategies made sense, he disobeyed God, for example, sparing the king of the Amalekites instead of destroying the Amalekites completely, as God had commanded.

The pastor noted that Saul’s acts of disobedience had to do with the state of his worship. He chose what he thought was good for the people instead of what God wanted for the people. He placed the people’s terms above God’s commands.

“Every strategy that is not submitted to God will end up sabotaging you,”  cautioned the pastor. “Instead of viewing work as worship, Saul saw worship as a means to be successful in his work. God’s anointed work in Saul ceased to be an expression of God’s sovereignty and became Saul’s responsibility for sovereignty.”

Ending with the familiar verses in John 15:5-8, Pastor Aries encouraged the members to abide in the Lord. He also announced that the church was holding The Crowning Sessions, a week of online prayer meetings happening from Jan 14 to 18, from 7 to 8am via the CHC app and website. 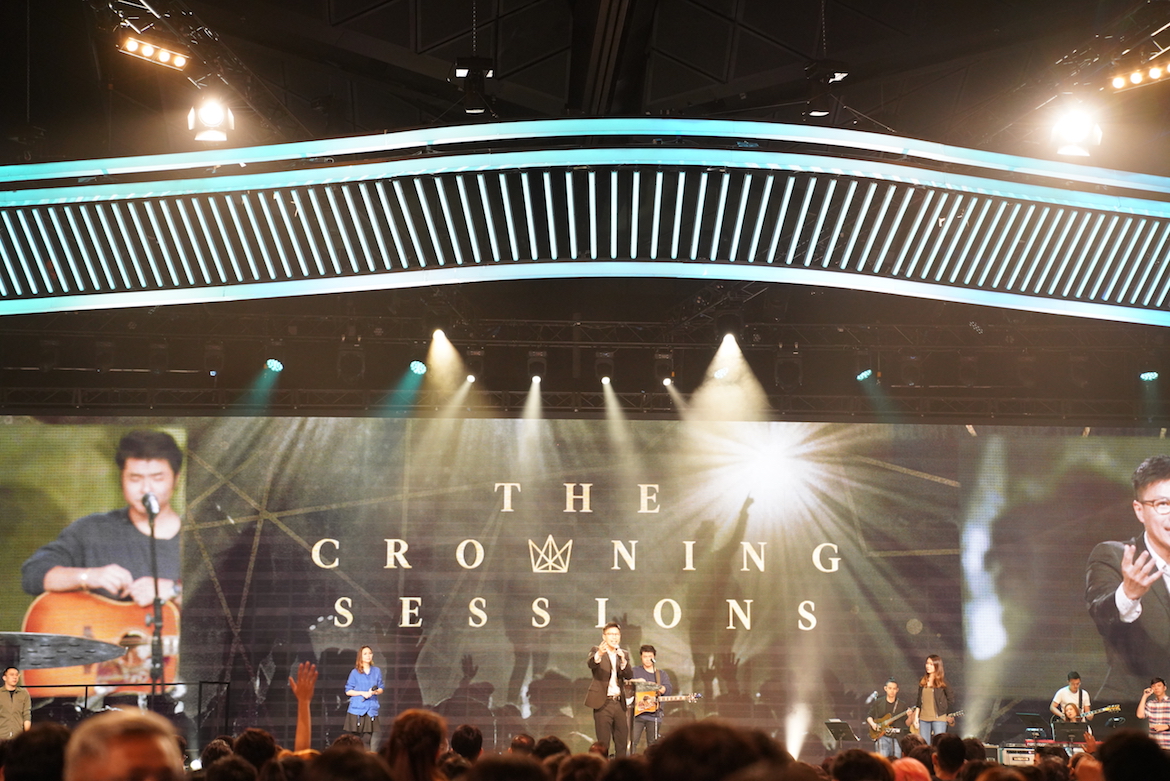