Once Upon Every Night With Jesus: Christmas 2018

Jesus is the reason for the season. This Christmas at City Harvest Church, the church celebrated His birth through a spectacular drama production and a timeless message. 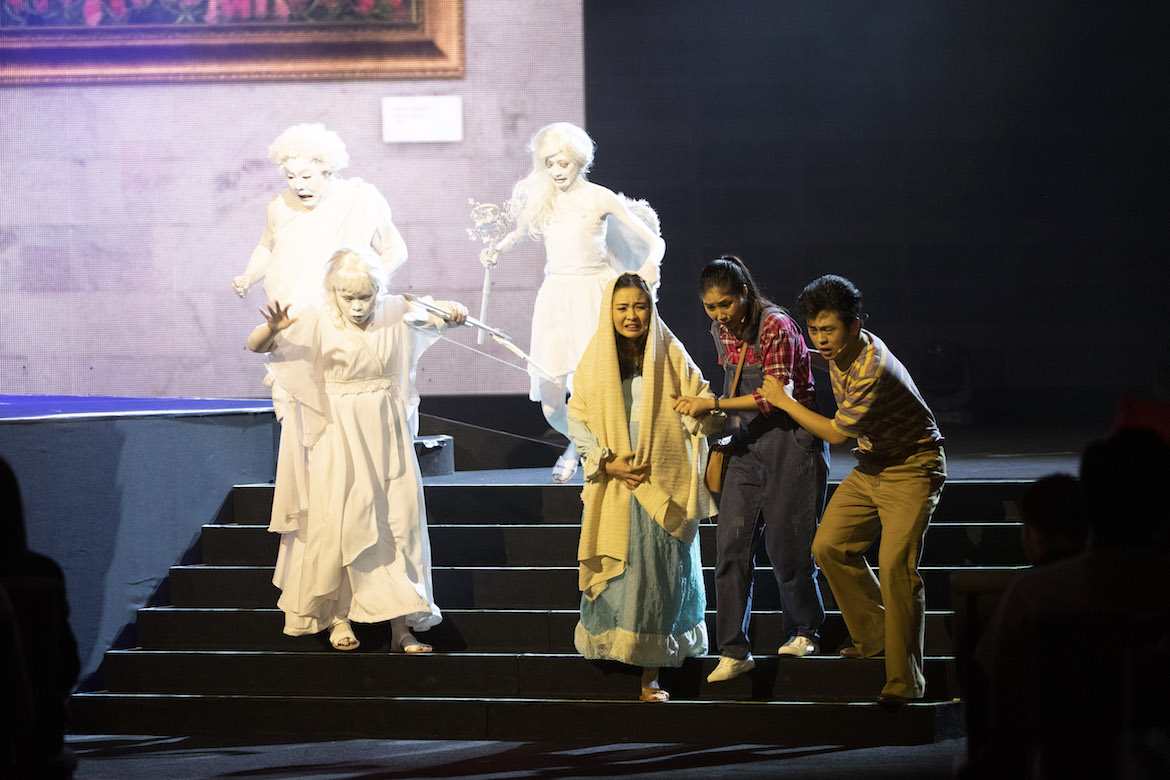 Imagine entering a museum after hours and the wax figures and dinosaurs come to life?

This year’s Christmas production at City Harvest Church, held on Dec 22 and 23, served up a hat-tip to Night At The Museum and The Edge Of Tomorrow but with a pregnant Mary as the central figure.

Titled Once Upon Every Night, the tale tells of a girl, Ashley who, disappointed by her past failures, walks into a museum near closing hours. She is inadvertently locked in for the night—only to discover that the inhabitants of the museum come alive every night. Nightly, Mary from the nativity exhibit runs away from Pharaoh and his men, sent by the evil King Herod, and every night, she is killed.

That is, until she meets Ashley. 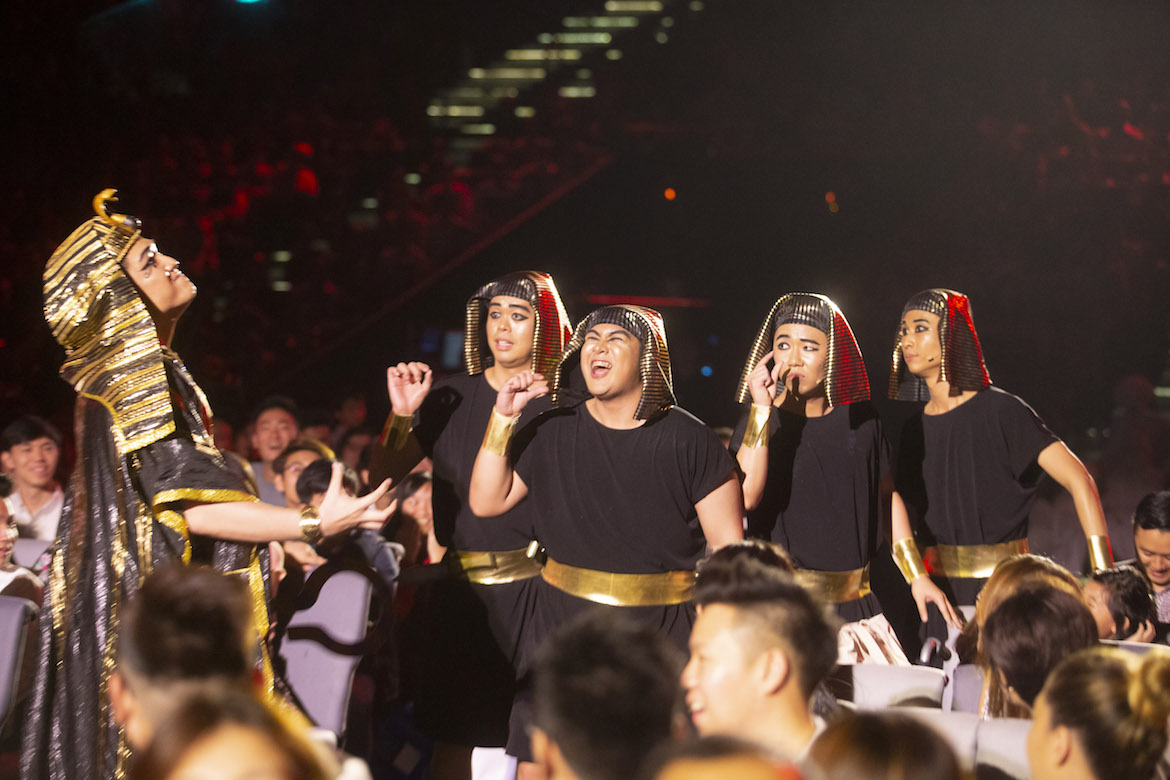 Mary explains there is a curse that determines that this scene will replay itself nightly until it is broken—by the successful birth of Jesus. Hence, Mary was captured and killed every night. She needs to find Joseph, who has been captured, so that the Nativity scene can be complete when Baby Jesus is born. Ashley gets roped into helping Mary, together with a hilarious trio that forms the Greek Chorus. Naturally, after all the close shaves, Joseph is freed, Jesus is born and all is right with the world—in the play and in the world—again.

Hailed by many churchgoers as “the best Christmas drama ever” that CHC has put up, Once Upon Every Night won hearts with its impressive props and side-splitting antics that involved audience participation. The one prop that wowed the audience was a giant pterodactyl dangling at the corner of the hall, among the crowd. It came to life as Pharaoh’s “secret weapon” in one of the fighting scenes. 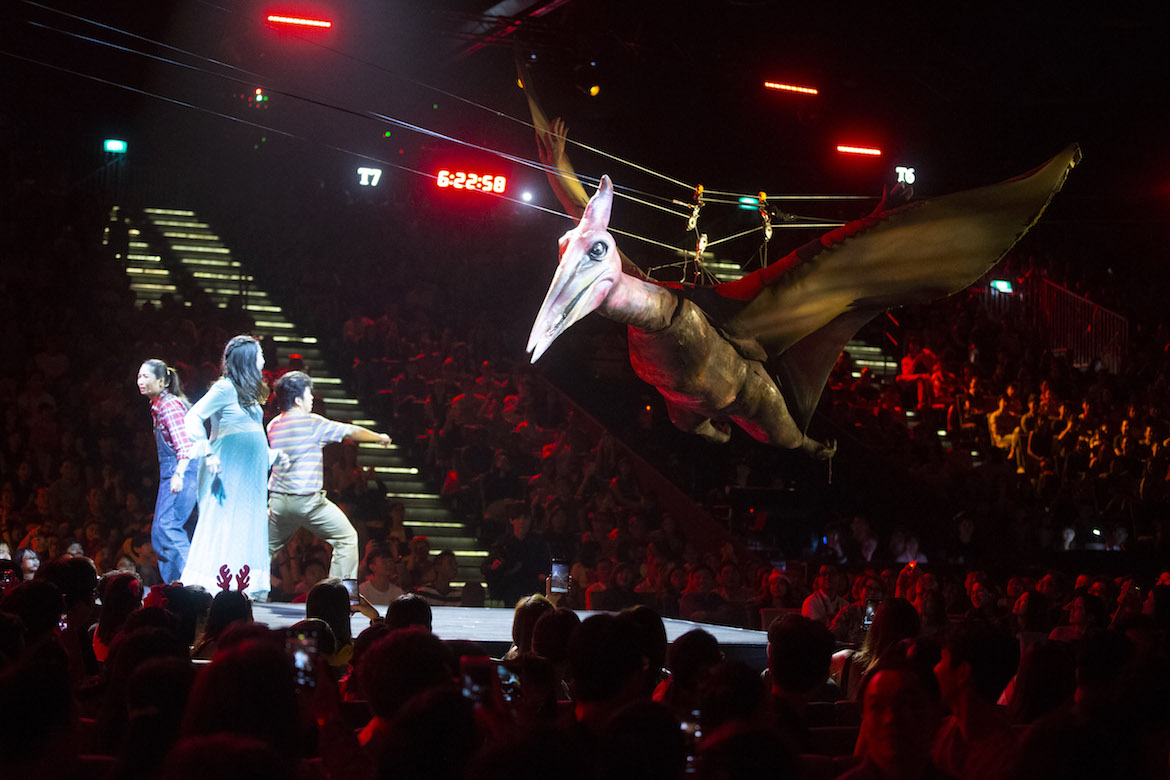 The action was not confined to the stage in this year’s production. The chase happened on stage and off, and the audience became part of the play: those sitting in the front row—namely the pastors—were also roped in to play parts, impromptu. 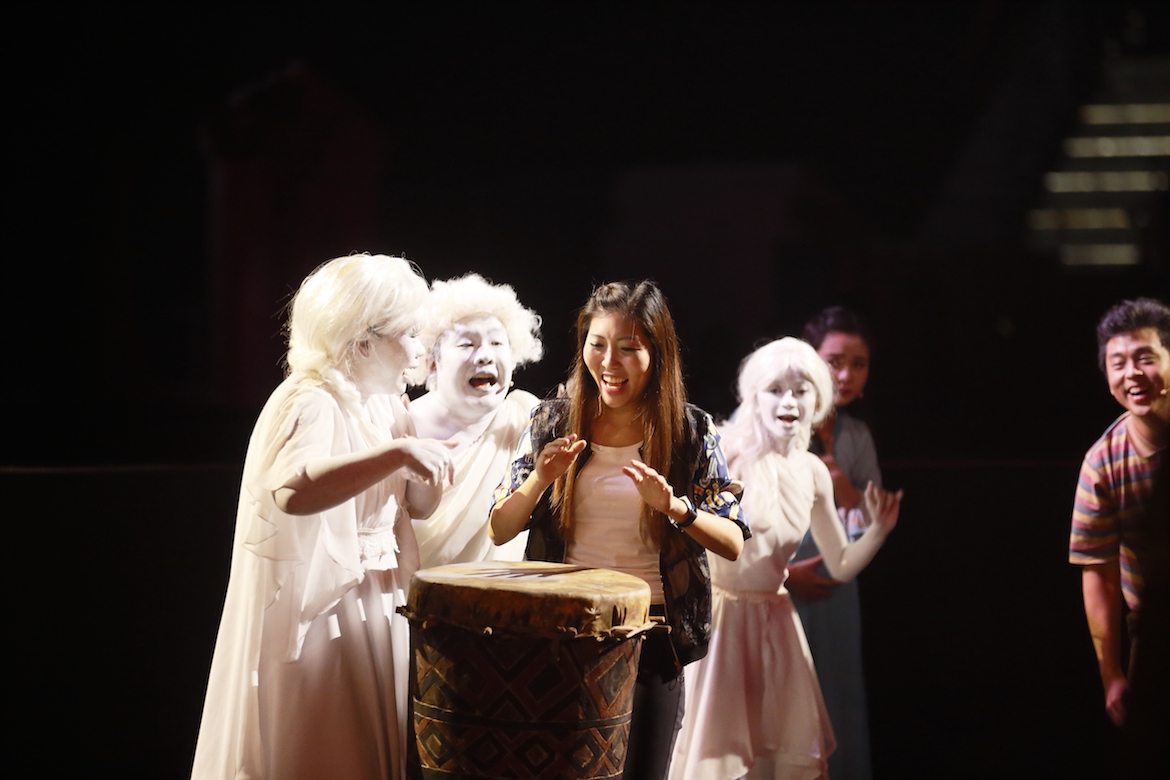 While the drama production depicted the world-changing move that bringing Christ to this world was, the sermon that weekend focused on what Christ’s birth meant for mankind.

“Christmas is a reminder that, no matter what circumstances we are in, God is with us,” declared City Harvest Church’s executive pastor, Bobby Chaw.

In Matthew 1:21-23, an angel of the Lord appeared to Joseph announcing the birth of Jesus through his betrothed, Mary. Pastor Bobby explained that the birth of Jesus came at a time when Israel felt that the Lord had abandoned them. Israel had consistently failed the Lord in the past generations and He had not spoken to them for 400 years.

“The Israelites suffered from loneliness. And loneliness is a terrible thing,” explained Pastor Bobby. “But on that first Christmas night, God sent His angel to announce the birth of Immanuel. Immanuel means ‘God with us’.” The pastor then assured the congregation that they do not need to feel abandoned or forsaken because, as God has established by sending His son, He is with them. 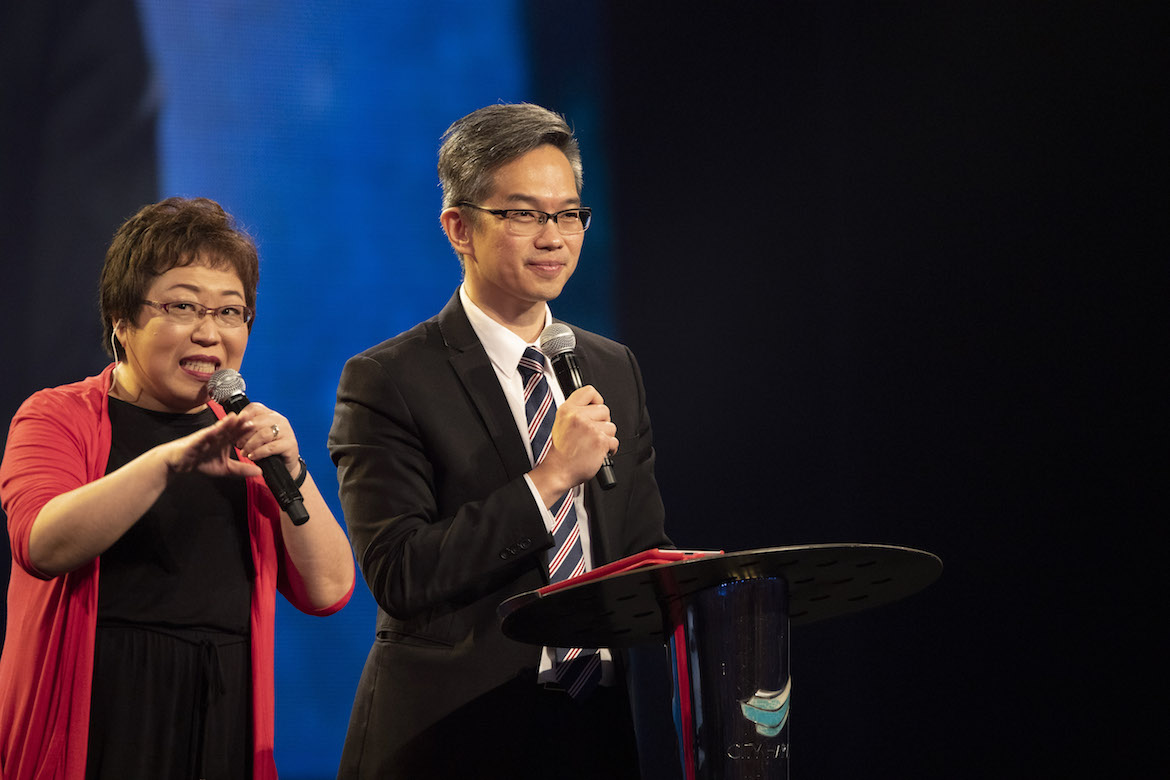 Pastor Bobby then brought the congregation through three things that God set out to give mankind on Christmas.

First, He gave them a star. In Matthew 2:9-10, the wise men were led by a star to the place where Jesus was born in Bethlehem. The pastor explained that in ancient times, people used the stars to guide their travels; thus, the star over Bethlehem speaks of how God is constant and faithful and that He will guide the congregation in their moments of darkness and loneliness.

“He will never leave us nor forsake us!” proclaimed Pastor Bobby before sharing a testimony from a member of the congregation, named Stella. At an early age, Stella was sexually abused. At the age of 18, she left Malaysia for Singapore, hoping for a change in her life. But her life in Singapore was not a bed of roses. Shortly after her marriage, complications in her pregnancy caused her to struggle with depression and suicidal thoughts. She was then introduced by her friend to City Harvest Church, but she continued to face problems: her son struggled in school and her mother was diagnosed with cancer. As a result, she fell further into depression and wanted to take her own life. She was then admitted into a mental institution.

“Fortunately, God was still with her,” said Pastor Bobby. He went on to recount the breakthrough Stella experienced when she cried out to the Lord for help in her moment of desperation. She was completely delivered from her depression and anxiety.

“Today, she is no longer bound by fear and worries,” declared Pastor Bobby. “He is Immanuel: God with us!” 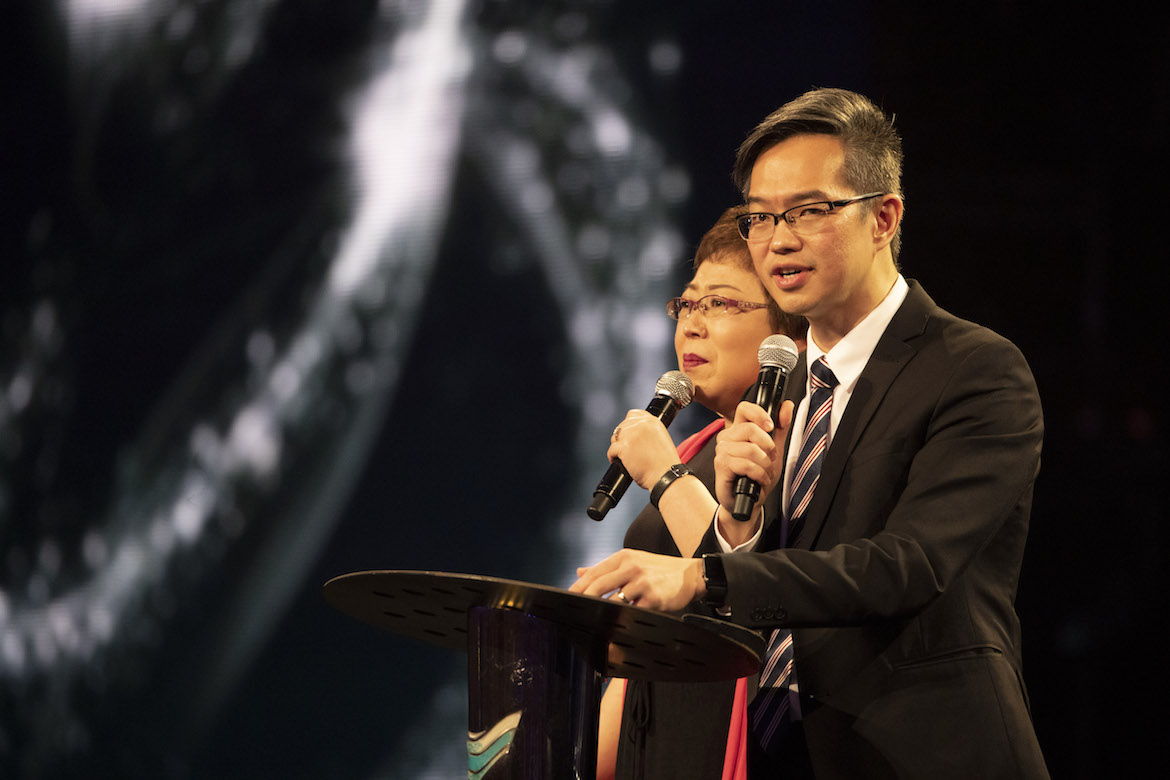 Secondly, God gave the world a song. Pastor Bobby brought the congregation to Luke 2:13-14, where a multitude of heavenly hosts sang when Jesus was born. The pastor explained that the singing of songs is a distinctive feature of Christmas.

“A world that has lost its song can learn to sing again,” Pastor Bobby encouraged. “Have you lost your song? Have you lost the joy in your heart?”

Tracy was a student at CHC’s School of Theology. In the middle of the school term, her little girl, Sarah experienced a sudden eczema attack—itchy rashes broke out all over her body except her face and feet. Eczema caused her great pain and she would occasionally scream at night from the pain.

In desperation, Tracy cried out to God. God reminded Tracy of His promise in Matthew 8:17, which is that He took our infirmities and bore our sicknesses. Tracy and her husband prayed and believed. And they started to sing and worship God. The next day, she noticed that the skin was beginning to heal and on the third day it was totally gone.

Finally, God gave the world a Savior. Pastor Bobby read from Matthew 1:21, where it states that Jesus “will save His people from their sins.” In Romans 7:19, 24-25, Paul lamented how he was burdened by sin, but he thanked God that it was only through Jesus Christ that he can be saved.

The pastor then shared the testimony of Zakaria. Zak, during the early years of his life, was severely addicted to gambling, and that drew him to secret societies and the trafficking of drugs. He became a drug addict at 15. His family decided to send him to Australia to study, in the hope that he could start afresh. But he went back to his old habits in no time.

Disappointed, his family started to distance themselves from him. His pregnant girlfriend also left him and went home to Korea. As Zakaria hit rock bottom, he became desperate and hopeless, and he cried out for someone to save him. When he returned to Singapore, he was introduced to New Charis Mission, an organisation that rehabilitates and finds work for ex-offenders. There, he found Jesus: Zakaria invited Jesus into his heart and Jesus started healing him. From then on, Zakaria overcame the urge to take drugs. Unknown to him, God had also started working on his girlfriend and the two reconnected. When she brought their 4-year-old daughter to Singapore to meet him, he surprised her by proposing, and they got married.

“Only Jesus can break the power of sin,” declared Pastor Chaw. “You may be trapped in bad habits and sin. But God has not abandoned you. On Christmas, He gave us a Savior to tell us that He has not given up on us.”

At the end of the service, Pastor Bobby gave an altar call and hundreds gave their hearts to Jesus. 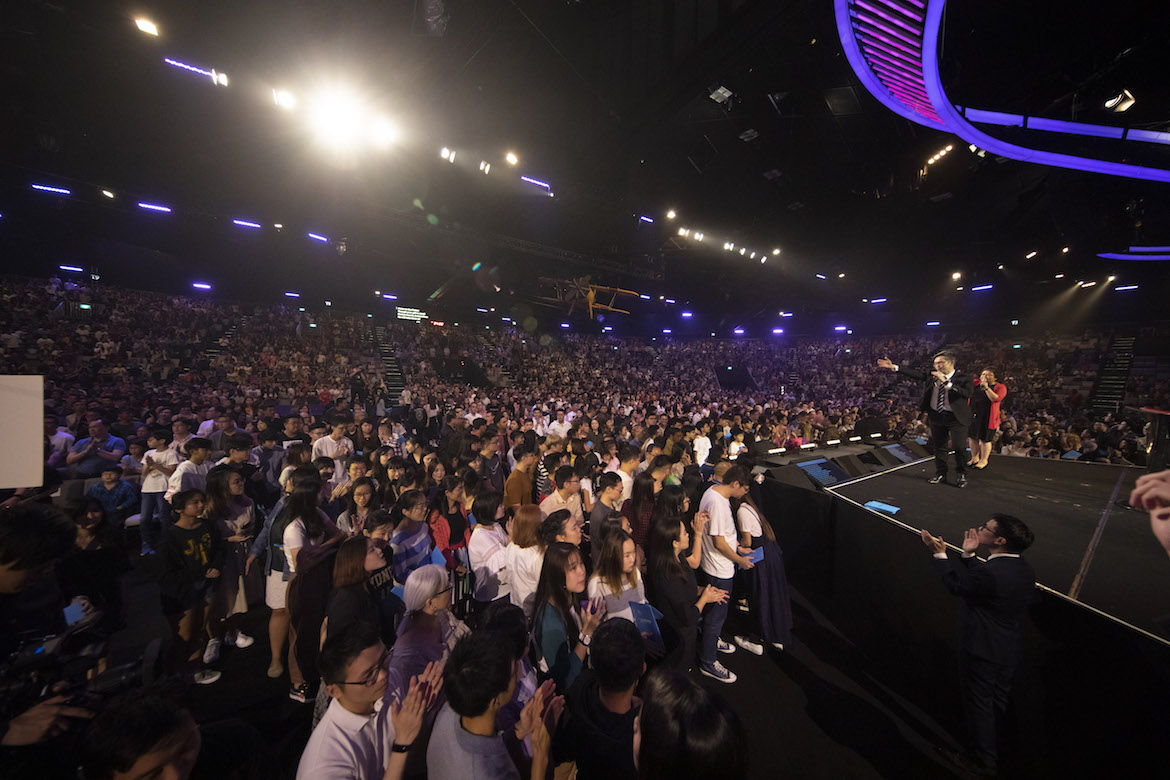