I thank God for my four wonderful children. Watching them grow, I cannot imagine not having them in my life. However, this would not have been so some 13 years ago, before the birth of my triplets. At that time, I would not have had the courage to think about having four children. My husband and I prayed and waited for five years before God blessed us with our firstborn. We were elated. But God always gives us “exceedingly abundantly above” all that we ask. Little did we know then what God had in store for us!

When the doctor broke the news to us that we were expecting triplets, we were shocked. In total, we would be having four kids! Would we be able to afford the expenses? Would we be able to give each of them enough care and attention? When we broke the news to our parents, they were rather worried. They heard about the complications involving multiple pregnancies and so they feared the worst.

People often ask me how did I feel when the doctor broke the news to us. After the initial shock, honestly, I was not really burdened by the news. Of course there were thoughts of whether the foetuses would develop well, but I mostly accepted the news well and felt peaceful about it.

The first trimester was horrible. The high hormone levels in my body made me feel sick throughout the day. I had no appetite and rested in bed most of the time.

The second trimester was better. I was up and about, busy with work. My boss, who had experience of carrying a pair of twins would tell me, “Slow down! You are walking too fast!” Surprisingly, I did not have a big appetite commonly expected of a mother carrying triplets. I ate my usual portion and did not have exceptional cravings. Needless to say, we were curious to find out the genders of the triplets. On one of my routine check-ups, the radiologist informed me that I was carrying two girls and a boy. I was excited to hear the news. This meant that we would be having two girls and two boys! By the time I was into the third trimester, my tummy grew very big. At about 26 weeks into the pregnancy, my gynaecologist advised me to stop work and minimise walking around. The increasing combined weight of the triplets would trick my body to think that I was ready for delivery. During that period of time, my sweet husband managed to borrow a wheelchair from a friend. After work, he would bring me out to the park on the wheelchair as he did not want me to get too bored staying home. During the weekends, he would bring me and our son out to the mall. It was quite a sight—him pushing a very pregnant woman and a toddler on a wheelchair. We got many curious stares. One of the things that caused me discomfort in the third trimester was the itchiness around my tummy area. My tummy was so big that my skin became over-stretched. The itchiness would disturb my sleep at night. My husband and I tried ways and means to relieve the situation, using olive oil, moisturisers, “snake powder”, hot water treatment … you name it, we tried it, but with no success. The itchiness only stopped right after my delivery.

While resting at home, I began reading books on how to bring up multiples. I imagined it to be a daunting task, taking care of three babies at one go. So, I thought I’d better learn from mothers who have had the experience of bringing up multiples. There were a lot of books on bringing up twins but not many on triplets. After gathering all the information, among the many tips and advice out there, there was one very important thing I learned—that I was not to see the triplets as a “package” but to pay attention to their individuality as they grow up. Because of this, something I never did was to dress them in identical clothes. During their birthday celebrations, I would always make it a point to buy each of them a cake, even though the celebrations fell on the same date. This has been my guiding principle throughout these years. Oddly enough, one of the most tiring things we had to do during my pregnancy was to decide on the names of the triplets. It is hard enough deciding on one name, let alone three! Including their Chinese names, that would be a total of six names! By the time we picked all the names, after considering the pronunciation and meaning of so many different names, we were both mentally exhausted. I always believe in praying and feeling the peace of God when choosing names for children. Names have significant value as seen in the Bible.

The evening before the delivery, I suddenly developed a fever. My husband and I remembered the advice of my gynaecologist, that it was good to be extra “kiasu” during the pregnancy and to check when we have the slightest concern. My husband called the hospital and the nurse advised him to bring me in. I was warded that evening as the doctor could not detect what caused the fever. During the night, they were observing me and doing different blood tests to diagnose the cause. The next morning, around 10am, I was talking to my husband when I suddenly bled. After checking me, the doctor immediately had me wheeled into the operating theater for an emergency C-section. It turned out that I was bleeding because one of the babies became detached from my placenta. At the point of delivery, our daughter’s breathing was already very shallow. I thank God for His protection because if I had been home when the bleeding occurred, by the time I travelled to the hospital, she would have choked on the blood and be in a critical condition. I believe that the sudden fever was God’s holy intervention to ensure that I would already be in the hospital when the bleeding started.

Sonia, Althea and Ephraim were born on November 9, 2004, when I was 34 weeks into the pregnancy. This marked the start of the interesting journey my husband and I would have as parents of triplets. 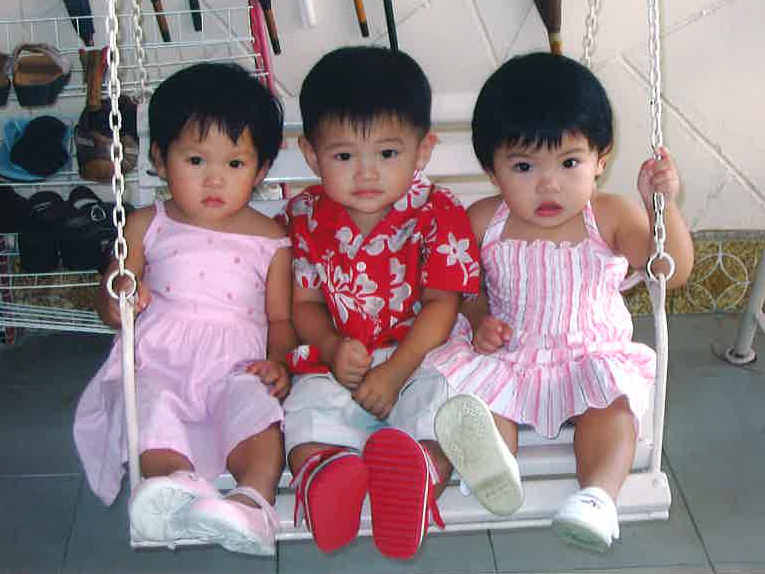