Last year, my two-year-old son, Josh, was hospitalized for a week after being diagnosed with Kawasaki Disease.

Kawasaki Disease (KD) is an autoimmune condition that is potentially life threatening as it can result in dilations and aneurysms of the heart vessels, leading to heart complications and failure. In Singapore, unfortunately, there have been child fatalities. As such, it is crucial to understand the symptoms and characteristics for early detection.

This was our experience. Josh was admitted to KK Women’s and Children’s Hospital (KKH) on a Friday after a week of intermittent fevers with no other clear symptoms. We had consulted two GPs that week, and no clear diagnosis was given. We were told to monitor him, allow him sufficient rest and administer the standard medication for fever—Paracetamol and Ibuprofen. On admission, I noticed an informational poster regarding Kawasaki Disease. The five classical symptoms listed on the poster were all exhibited in Josh, but to a lesser degree—persistent high fever (40 degrees and above) , swollen lymph nodes, extreme irritability, body rash and swollen eyes. My fears were further compounded when the doctor-in-charge that day said that he believed my son could be having Kawasaki Disease. 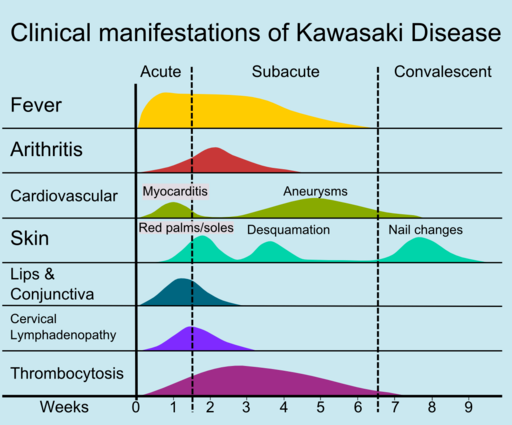 It is, unfortunately, very difficult to diagnose this illness. Firstly, no studies have been able to conclusively determine the cause of it and symptoms are presented over a length of time. Secondly, 25 percent of KD patients do not exhibit the classical signs of KD—my son being one of them. On hearing from the doctor, I immediately sought out more information about on this condition, and the information I found was far from assuring. But one thing that stood out for me was that early diagnosis was key, and that the timing of treatment was crucial.

Two mothers called me within the hour the doctor spoke to me. They had gone through similar experiences of their children having KD, and their words and practical advice were reassuring and gave me clarity on what needed to be done.  Both advised me to request immediately for an echocardiogram (‘echo’), which is an ultrasound test to determine the condition of the heart.  This proved to be a crucial piece of information.  This procedure is safe, painless and without radiation. A transducer, a small microphone-like device, similar to the one used by gynecologists in sonograms, is placed on top of the gel and against the skin.[1] The transducer is moved over the chest, abdominal area, and neck to obtain images of the heart. For young patients, the option of oral sedation is available, and the entire procedure would cost SGD$352 if done at KKH.

That afternoon, I asked the next doctor on duty for an ‘echo’ to be done, but was told that this was not in the proposed treatment plan. The reason given was that the likelihood that KD is present for Josh is low due to his mild symptoms,  and his lab test results for ESR (Erythrocyte sedimentation rate) and CRP (C-reactive protein) were not high enough to prove KD. Knowing the difficulties in diagnosing KD, and the implications of a delayed diagnosis, I persisted in requesting for an ‘echo’ and eventually, it was done the next afternoon. The results showed that his right coronary artery had dilated (mild), which eventually led to the diagnosis of Kawasaki Disease.  Treatment was immediately recommended.

Treatment for KD is through the administration of intravenous immunoglobulin (IVIG) through an intravenous drip, and was done over a few hours. Thankfully, Josh responded well and his fever subsided. In all, we spent five days in the hospital, and was discharged with a treatment plan of daily low-dose aspirin to prevent blood clots due to the dilation of the heart artery.  We continue to pray and believe God for total recovery and that his next heart scan in February 2017 will show no signs of dilation in the arteries, a strong heart and an excellent discharge report.

As parents, the lesson we learned from this experience is that we must:

I am grateful for the unwavering support my pastor, Eileen Toh, who was there for my family during that difficult and confusing time. She was instrumental in connecting me with the two mothers, and in giving us much needed encouragement and strength to act on what was needed. My cell group, CCH1, also provided us with round-the-clock practical help, support and prayers. For that, I am grateful.