Breastfeeding when you’re out and about

Feeding a hungry baby in view of other humans shouldn’t be a thing, but it is. Why? Because … boobs. And I get it, I’m not a fan of seeing other people’s breasts out on display either, but after having five babies who didn’t understand the value of delayed gratification and always wanted their milk RIGHT NOW AT THIS VERY INSTANT, I also totally understand why breastfeeding in public is necessary. I wouldn’t go as far as to call myself a lactivist, because that sounds so bra-burning feminist kind of radical, but I am definitely in favor of mothers breastfeeding anytime, anywhere.

I think I’m going to preface this with several important points that breastfeeding mothers would like you to know.

1. We’d much rather not show you our boobs.

Given a choice, I’d definitely pick not showing off my boobs. Ever. But it’s really not about you, it’s about providing basic nutrition to my baby who thinks that breasts are her food delivery devices. Also, breastfeeding a hungry/angry/flailing baby can be like wrestling a bobcat so if you happen to spot some boob action in that split second where I’m not entirely successful at keeping it all under wraps, just know that I’m trying my best to keep them hidden from view here.

Hungry babies can’t be reasoned with and they do not care that mommy’s modesty is at stake. They will make their displeasure known by making a terrible sound with their mouths until you give them exactly what they want. And what they want is milk on tap, even when you’re out with no nursing room in sight.

3. Breastfeeding in public is the very last resort.

My favorite place to breastfeed my baby is in my comfy room with my soft, soft bed, my pillows (to prop the baby so my arms don’t get tired) and my Netflix. Unfortunately, life with four other kids doesn’t afford me the luxury of being able to feed my baby at my favorite place all the time. I try to arrange my schedule such that feeding time coincides with comfy room time but babies don’t really care about schedules and they want what they want when they want it. For the record, by the time I get to the point where I have to let out those boobs in public, I would have already exhausted every possible option and this is the very last resort.

So then if you have to be outdoors with a hungry baby and there’s no nursing room to be found, what’s a nice, conservative Christian girl s’posed to do? I’m glad you asked. After breastfeeding three babies, I’ve figured out a few ways to make this process less awkward for everyone involved.

First, let’s talk about nursing covers. In theory, it seems like a great solution. If you don’t want your breast to be seen, cover it up with a piece of cloth, problem solved. Except that it creates a bigger problem because in order for the nursing cover to do its job, it also has to cover the baby’s head entirely. This cuts off ventilation, restricts air supply, and makes the baby feel like she’s drinking her milk and dying at the same time. No baby should have to eat like this. No one should have to eat like this. As it is, my baby sweats through an entire romper when she feeds in a cool, air-conditioned room without a nursing cover. If I have to feed her outdoors in 30-degree heat under a nursing cover, she will go crazy.

In lieu of a full wrap-around cover, I bring along a breathable, muslin cloth to drape over the top part of my shirt whenever I’m breastfeeding in public. If you angle it just right, you can cover the top of your boob while leaving the baby’s head and nostrils exposed so she can breathe. Then just pray that she doesn’t yank it off while drinking. 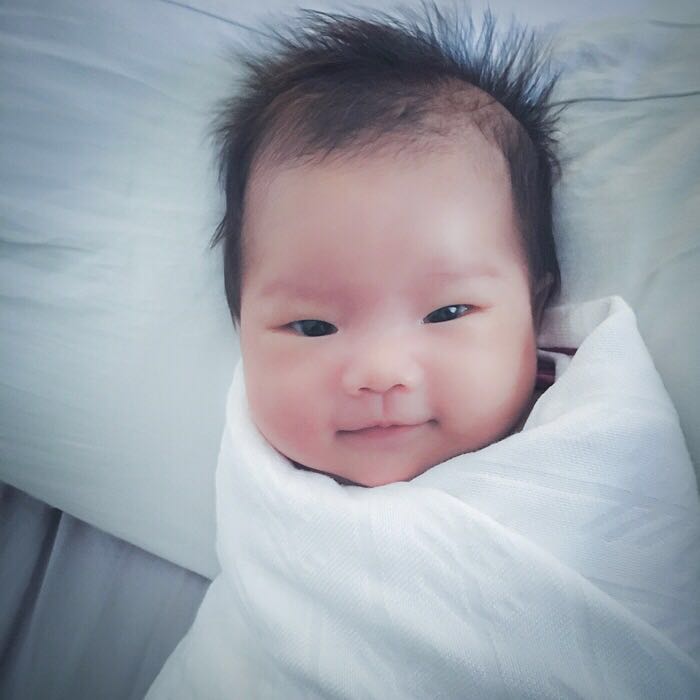 Moving on to nursing tops. Nursing tops are great because they are specially designed for quick and discreet boob access. If you can find gorgeous, trendy nursing tops, go for it! Unfortunately, this has been challenging for me, so I Macgyver my wardrobe to fashion makeshift nursing tops. You can go with the 2-top layering trick (one up, one down) so you don’t have to choose between exposing your side belly fats or your entire chest. This works with two t-shirts, a t-shirt and light cardigan or a t-shirt and tank top. Button down shirts work really well too, as long as you remember to bring along an extra cloth to cover up the parts you want to keep hidden.

When you’re breastfeeding, 99 percent of the time, the breast will be covered by the baby’s mouth and possibly also a strategically placed cloth. The only time you’re risking boob exposure is during the latching process.

There are two common ways to do this:

I’ve seen moms who are extremely skilled at the Cover-And-Latch technique. They’ll prop the baby under a nursing cover, latch the baby without looking, then remove the nursing cover once the baby is in position. I tried this several times and none of those times turned out well because I happen to have babies who hate the nursing cover and will flail like a wild stallion the moment I put one on. Also, with the cover covering her entire face, it’s impossible to know where her mouth is, so I’m like struggling to hold a screaming, flailing baby while jabbing my breast repeatedly at her eye. It was a total disaster. Which is why I prefer method #2.

I’ll walk to a quiet, secluded corner (make sure there are also no cameras or else woo, free show!), extract the boob, latch the baby, cover up with cloth, make sure everything is in position and then continue on my merry way. On a good day, this all can be done in 3 to 5 seconds.

There was a time, several years ago, back when I was still new to outdoor breastfeeding, I was out with Finn when he got really hungry. I know this because he started making that screaming sound that made everyone around me stop to look. I tried the usual swaddling and rocking but nothing seemed to be able to comfort him—he was in full-on food rage mode. So I sprinted to the nearest nursing room, which was two levels up, only to find that it was occupied. And there I was, panicking as I stood outside, frantically bouncing my screaming baby, hoping the mom would miraculously vacate her spot, but she didn’t. I contemplated running off to look for another nursing room (and risk also finding it occupied), or running back to the car (which I had parked 10 minutes away because I was a cheapskate and refused to pay mall parking rates) but none of those options seemed particularly appealing to my angry infant, whose screams had by now escalated into a fit-inducing frenzy.

I did the only thing left to do, which was to head to a secluded corner and feed my baby right there. The quietest bench I could find was occupied by another lady, so I sat down at the other end of the bench, fumbled with the nursing cover and finally managed to latch on the baby. She looked at me the whole time and I was half expecting her to ask me to do this somewhere else but she didn’t. She asked me how old the baby was, and we talked about how breastfeeding is good for raising the baby’s immunity. It was the first time I had a conversation with a stranger while breastfeeding, which turned out to be really nice. She made it feel normal for me to do this and I was grateful.

There are a lot of things about motherhood that can be really hard, but this shouldn’t be one of them.