Angeline Tan’s 39 Days Across The USA

Crazy Cycling Chick chronicles Angeline Tan’s tale of overcoming adversity, inner doubts and pushing her limits to ride from the West to the East Coast of America in 40 days. An avid cyclist and runner, Angeline Tan gave up her career as a real estate agent to relocate to the US in 2012 when her husband, Jason Ong, moved his software engineering career to Silicon Valley in California.

“After completing the Ironman Triathlon in July 2013 in California, I still had so much energy left and wondered what I should do next to go further, and cycling across America came to my mind,” said Tan, a City Harvest Church member until her move to the US. She remains in touch with her pastors and fellow church mates.

The new environment spurred her to step out of her comfort zone and turn into reality the wild idea of cycling coast to coast in 40 days. Fast forward two years, and Tan has chronicled her adventures in a documentary as well as a book titled Crazy Cycling Chick: The Inspirational Journey Of Angie Across America.

The book, published by Marshall Cavendish and launched last month in Singapore at the Hood Bar and Café, covered the challenges of planning the the logistics of her trip, her keen observations and thoughts as she embarked on this mental and physical journey, and deeply inspiring—sometimes unexpected—stories of people she met on the road.

Sharing the motivating factors behind this major undertaking, Tan recalls, “I had an unhappy childhood. Growing up in a family with physical abuse and a lack of finances, I dreamed to do something remarkable one day—something big that I would be proud of. What we are today is the sum total of our thoughts and actions yesterday.”

Six months before the expedition, she experienced the fears of stepping out of her comfort zone into the unknown. Immersing herself in prayer, Tan reminded herself that God was always with her in each step she took.

She also stopped indulging her craving for pizza and embarked on a strict training regime to prepare for the trip ahead.

Taking heart from the sermons preached by pastors Dr AR Bernard of Christian Cultural Center in Brooklyn, New York, Dr Phil Pringle of C3 Church Network and Dr Kong Hee of CHC, Tan learned to dream not according to her own ability and limitations, but to rely on God’s strength.

In the summer of Jun 2014 she, with a laid back cycling partner she had just met, kicked off the tour from Astoria, Oregon, averaging 100 miles (160 km) per day. It started out smoothly enough but after going at it for days in a row, Tan found she began to face certain difficulties, including hallucinations and bodily pains. From the seventh day onwards, she had to consume painkillers five times a day to relieve the excruciating toll on her muscles. The book is an eye-opener for travellers, even those not planning to cover the US on a bike. Given that it was summertime, Tan was underprepared for the snow and strong winds (even hail at one point) in parts of middle America. It was with great relief that she reached her pit stop at in Wisdom, Montana on the 10th day.

At a nearby café the next morning, she met a female cyclist, Joanna Abernathy, who was in her 40s and was cycling in honor of the late civil rights activist Dr Martin Luther King. Abernathy’s positive spirit brought much-needed encouragement to Tan. (Sadly, Tan discovered several months later that Abernathy was knocked down by a car and passed away before completing her cycling trip.)

The strong winds did not relent for the rest of her journey, prolonging her trip by about three to four hours before she reached her destination for the day; prior to this part of the route, she had clocked eight hours in the saddle daily. 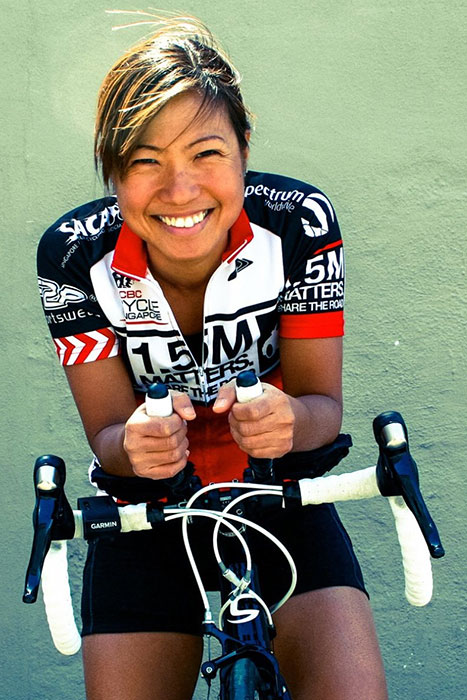 She was on the verge of giving up when, on the 22nd day, at a gas station, she met an old man in his 70s, who introduced himself as Albert. They chatted and he told her that he just had a heart bypass and only had four months left to live. She prayed for him before leaving. Seeing how others clung on to life encouraged her to fulfil her own dreams, and she pushed herself to complete the remaining 2,000 miles.

Tan eventually completed her cycling trip after 39 days when she reached her final stop at Baltimore, Maryland, one day ahead of schedule. Grateful for God’s protection throughout, Tan also voiced her appreciation for family and friends as well as strangers who gave both moral and monetary support.

Tan hopes that her cycling adventure will spur others to dream big, and to pursue this dream courageously.

“We do not have to stop dreaming because of the lack of endurance, resources, capabilities and abilities. Regardless of our limitations, we can take baby steps towards our dreams. All we have to do is to set a goal, break it down into small steps and take one step at a time,” says Tan.

Crazy Cycling Chick is now available at The Ink Room, Kinokuniya, Times and Popular bookstores. It is also available online at Amazon US and UK. Follow Angeline’s latest adventures at www.angieacrossamerica.com

Never Too Old To Cycle

All I Want For Christmas Is…

The Business Of Doing Good