In 2003, I left Singapore to do my degree in Melbourne, Australia. My dad suggested that I apply for Australian permanent residency. I rejected his idea because Australia felt nothing like home to me back then.

Fast forward to January 2013, my world view started to U-turn. Married and expecting a child at this time, my husband JX and I began to feel that Singapore was increasingly expensive to live in. We were also surrounded by friends with school-going children, and hearing their experiences made us realize that the Singapore education system was not exactly what we wanted for our children. We didn’t need our kids to be academic, but rather, we hope they could have the space to pursue their interests and enjoy learning in a more holistic manner. So we decided to apply for permanent residency in Australia as well as Canada, where I have family. We hadn’t ironed out all our doubts, and we weren’t sure if we would actually go, but we decided to just apply first and see where it led us.

Less than a year after we applied, we received our PR visa for Australia. We were given four months to make a landing trip, so in May, we took our first holiday to Perth with our son Haskel, who was five months old at that time. We wanted to see how he would adapt to being in a different country. 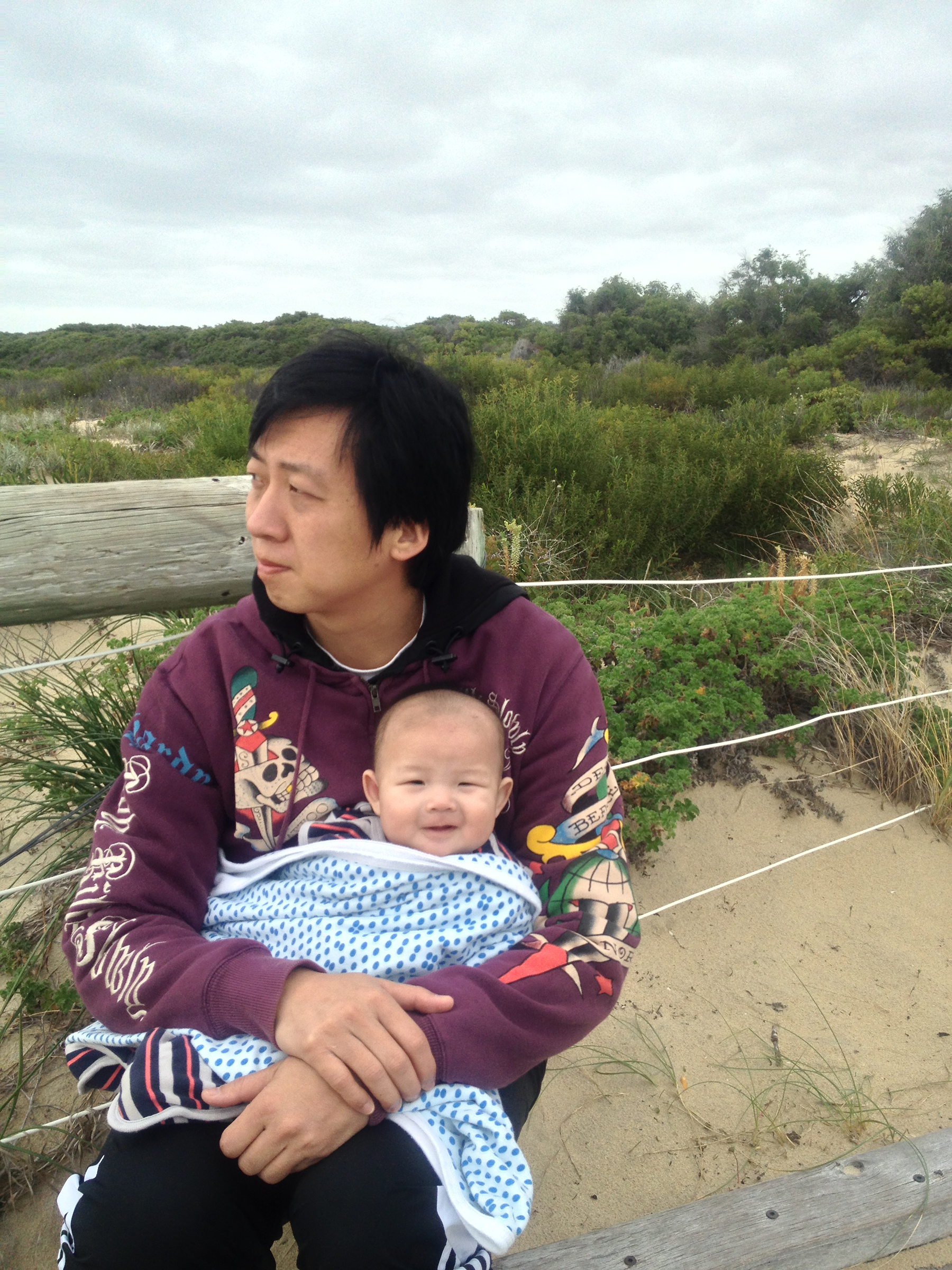 Now that we look back on it, we think we were pretty brave wanting to move to a place we had never visited. Or maybe we were foolhardy. Whichever it was, it got us far enough.

We weren’t very excited about Perth initially because, like many young Singaporeans, we thought it would be slow and boring. We had our sights set on Melbourne but because our visa was state-sponsored, we had to either choose Perth or Adelaide. We picked Perth because it was closer to Singapore, albeit with a little reluctance. However, sometime during that trip, Perth surprised us. Everything was close at hand—beaches, waterfalls, shopping centers were all within a half-hour drive from the city. It was so spacious that Melbourne looked crowded in comparison. Perth is on the same time zone as Singapore, and it has the loveliest weather. But best of all, it would be cheaper and faster to return to Singapore any time we needed to. So we decided to take the plunge in August 2014. It was not easy. Both of us are the firstborns in our families and we wondered if we were doing the right thing leaving our parents behind. However, we also thought that if we liked the place and settled down well, we would be able to bring them over in future, if they wanted to come. On my part, I was also reluctant to leave behind my 84-year old grandmother, who had taken care of me for half of my life. I knew there was no chance she would come to Perth.

We also struggled with the thought of leaving the church and our cell groups. JX and I had been in CHC since 1997 and 1995, respectively. For the last two decades, this had been a such a huge part of our lives. We had grown up in CHC, and it would not be easy to uproot ourselves.

But after a tearful goodbye, leave we did. We spent the first two weeks in Perth searching for our rental apartment. When we found the perfect apartment by the riverside, I busied myself setting up home while JX started looking for jobs. In the two years we have been here, he’s gone from selling roller shutters to now being a country manager for a Singapore-based company in the oil and gas industry. We’re also looking into arranging getaways for Singaporeans to come over as a sideline, because we realized there is so much more to Western Australia than Margaret River! Now, JX is also handling migration accounts with the agent who got us here, and together, they are helping people to fulfil their dreams of getting permanent residency in Australia. If you measure our lives in Perth by our Facebook accounts, you would think all we did was take day trips to scenic places, cook inspired dishes and spend the whole day waiting for our sons to get up to some antic so we can take photos of them. People envy us and wish they could do the same. I know this for a fact because they have spoken to us and JX has even done the initial assessment for them. But like many things you see on Facebook, there are other realities that we do not post.

Not long after we moved to Perth, one of my worst fears was realized when my grandmother was diagnosed with pancreatic cancer. Over the next nine months, I flew back to Singapore with Haskel three times to be with her and my family. Her cancer was swift and deadly—in May 2015 last year, she passed away.

In May this year, I gave birth to our second son, Riley. I felt a lot more scared about this second birth than my first, because it felt like I was really on my own. It didn’t help that I was giving birth in a public hospital where I had no idea who would be attending to me during delivery. ln addition, JX would not be able to go into the delivery ward with me because there was no one to look after Haskel. It was only after we asked my mother to fly over to help babysit Haskel that I began to breathe a little easier. Because my mom is still working and has limited leave, deciding when she should fly over was a guessing game in itself! Riley was due on May 24, so we decided to have my mum come on May 21, and hope for the best. I kept speaking to Riley, “Please don’t come out until Por Por arrives, okay?” He was very compliant: my mum arrived on the afternoon of 21 May, I went into labor that same night and Riley was born four hours later. After the birth, things didn’t work out with our confinement nanny, so JX’s mum and aunt came over at short notice to help. Then, Riley had a few episodes where he stopped breathing and turned blue, so he was in NICU for about a week. The doctors figured it was a lung infection and put him on antibiotics. I’m glad to say he recovered well and there has been no more such episodes. These two periods—my granny’s sickness and my giving birth—stirred up mixed feelings in me. On one hand, I couldn’t help but miss my family and church support back in Singapore. On the other hand, I’m glad we were close enough that we could still easily fly back, and our family could fly over. With modern technology, the world now feels much smaller, and we are able to keep in touch more easily and quickly. We can FaceTime and Skype our families, and we’re also glad that we can also log on to watch CHC service online. Church still remains one of our most-missed items, because there’s really nothing like CHC. Being able to watch service online keeps us connected, and we are able to be fed by the worship and preaching of the Word. Plus, it’s always great to see all those familiar faces on screen. In the last two years, we have grown to like Perth very much. There is a lot to explore over the weekends because Western Australia is so big and there is always some event going on. We spend much less when we go out, thanks to the lovely parks and riversides that are perfect ground for Haskel to run around and tire himself in. And because it’s less crowded here, it’s easier to keep watch over him. I also used to be limited to air-conditioned places in Singapore because Haskel has eczema which is triggered by the humidity in Singapore, but his eczema mysteriously disappeared within a month after we got here! It returns with a vengeance within half a day whenever we go back to Singapore but I am just relieved that he doesn’t suffer from it when we are in Perth.

Living overseas on your own opens your eyes to many things you take for granted back home in Singapore. But because you are on your own, it also allows you more space to develop as a family. I mean, what do you do when the shops close at 5pm everyday?! It was only recently that Target, K-Mart, Ikea and the supermarkets began to open until 9pm on weekdays. But those thumb-twiddling times meant that we looked to each other for play and conversation, and we were able to work on stuff we had always wanted to but never had the time to get around to.

In the past, migration was a very definite thing, because it usually meant that you would not see your family again for a long, long time. These days, with businesses going global and the ease of travelling, migration is a lot easier. I’m thankful that we get to enjoy the perks of Australia while still keeping connected to our ties back in Singapore. Having said that, we are always glad when family and friends come to visit, so do drop us a line if you’re coming our way!