CN Blog – “Why I Missed Church Service For Two Years”

It’s true. I did not attend church service for two years after my son was born and I’m glad for it. I knew there would be changes to my lifestyle once my son was born, but one thing I did not expect was the impact he would have on my church life.

When I was single, I never missed service. Almost. I did miss service one time, when I was a young Christian, and my cell group leader later told me she cried when she couldn’t convince me to attend service that weekend. I thought to myself: if it was important enough for her to care so much, it must be very important to God as well. So, I didn’t like to miss my weekly date with God.

But when my son Daniel was born, missing services became a regular thing. To be clear, I was in the building physically, but I was stuck in the nursery room. Don’t get me wrong, City Harvest Church has the best nursery in town. There are toys in the nursery to keep the little ones busy while we mommies and daddies (and domestic helpers) watch the service on the big TV screen. But it is just not the same as attending services in the main hall.

When my child reached the ripe old age of 2, he was promoted to Harvest Kidz where he would have free play for an hour and structured Bible lessons for the next.

I wish I could say that my son clapped his hands enthusiastically during praise and listened attentively to the Bible story but it was really not the case. He would be playing happily during free play and twirling around during music, but when it came time to praise God, he would get all clingy and insist on sitting on my lap. During Bible story time, he would get up and enthusiastically join the rolling-on-the-floor crowd. I would then try to woo him back to listen to the teacher but that worked only half the time.

I missed praise and worshiping God, I missed feasting on the Word of God and mostly, I missed soaking in the presence of God. Yes, parents can watch service on a projected screen in Harvest Kidz and earphones are provided so we can listen to the preaching. But it’s quite impossible to concentrate on the sermon with your kid calling “Mommy, Mommy” every five minutes. A friend once came to Harvest Kidz with his niece and he commented, “It’s really hard to worship God here, it’s as like not coming for service at all.” I never saw him back in that room again.

There were many times I wondered why I was even doing this. I could easily leave him at home with my parents, or bring him to the main service, never mind if he bothered the people sitting around us.

When I was heavily pregnant with my second child and my husband was away on business, there were days I really wanted to throw in the towel and say “I give up, I’m not going service this weekend!”

But I had this stubborn resolve that I needed to bring my son to church, I needed him to grow up learning the ways of God. I am fully aware that even if I bring him to church every week as a child, he might very well grow up and decide he wants to have nothing to do with God. But at least I would know I’ve tried.

I am glad I did not give up. Just the other day, he looked at me while I was busying setting food on the table and announced, “I want to say grace.” I sheepishly stopped being busy, sat down and prayed with him.

Daniel is now 3 and every week, he walks into Harvest Kidz happily, waves goodbye to me and joins his friends. One time I dropped him off too early, but he happily joined his teachers for their pre-service prayer meeting. In the middle of the week, he would randomly tell he wants to go to church.

I wasn’t expecting it to turn out this way, I seriously thought I would be sitting in Harvest Kidz with him till he was 10—he was that clingy. But a few weeks before he turned 3, I put my foot down one weekend and told him that he was a big boy now and that Mommy was going to the “big people’s service”, and he would survive. And he did. He cried for a while but after that weekend, he was a changed person.

All glory to God! Of course, many thanks to the Harvest Kidz teachers. They are so good at engaging the children, so loving to even those who are rolling on the floor every week, and so patient in getting them to join in the lessons. There are times when I was exasperated at Daniel’s tantrums, but the teachers were so patient and loving, picking him up to calm him. They showed him the love of God and won him over.

I know I’m not the only person that feels this way. Fellow parents that commiserated with me are now seen walking hand-in-hand into the “big people’s service” after dropping their child at Harvest Kidz. Our kids do grow up—it may seem forever when they are in the process of it but when we look back, two years is really a short time.

My second son Danzel is now a year old. I’ll have to sit in nursery and the 2-year-old class all over again but this time, I’ll gladly do so. 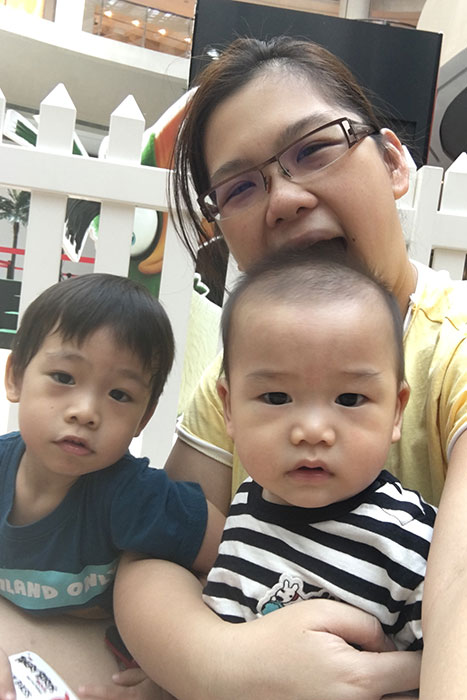