Emerge Night 2016: Let Your Nets Down For A Catch

“People don’t care how much you know until they know how much you care.” Wu Yuzhuang taught City Harvest Church youths the practical steps to reaching out to the lost at 2016’s Emerge Night. It was a night of great expectation and excitement, as City Harvest Church youths began pouring into Suntec Hall 606, on May 27, for the highly anticipated Emerge Night 2016.

Emerge is a youth movement for those 25 and under in CHC. Emerge Night is a yearly affair where the youths gather and get inspired to live their lives for Jesus. This year, the night meeting kicked off with vibrant games such as the imaginatively-titled “Emerge Avengers War”, followed by an uplifting time of praise and worship. Next, Wu Yuzhuang, a division pastor with CHC, took to the stage to share an inspiring sermon on how every individual has the power to change the world.

He started off his sermon by affirming the youth, declaring that “one person can make a difference”. The pastor then read from Acts 10:38 and Luke 9:1—in both verses God anointed Jesus with power and later, when Jesus called His disciples, He also gave them the power to do His works.

God’s power that works in Jesus, worked in Jesus’s disciples. It also works in each and every one of the young people seated in the hall, the pastor said. The power, however, has not been given so that they can feel good, it is given to empower the youth to do something for Christ.

“We receive power so we can be witnesses for Jesus,” said Wu. “This means that we share our personal testimonies and win the lost for Jesus Christ.”

Wu then shared a story from Luke 10, in which Jesus told the disciples that the harvest is plentiful, but the labourers are few. In Luke 10:3, Jesus then sent them out and said to them, “Go your way; behold, I send you out as lambs among wolves.”

Wu explained, “Jesus was sending His disciples to evangelize to those who didn’t know Him. Similarly, the youth of Emerge are to ‘go as lambs’ with the attitude of Jesus, so that you can influence your friends who do not know Jesus.”

Referring to Luke 10:5-7, Wu went on to share that Jesus gave the order in which His disciples were to work:

“Many Christians tend to reverse the order and often try to preach the Gospel first. People don’t care how much you know until they know how much you care,” Wu said. He went on to read from John 4:39, which says, “And many of the Samaritans of that city believed in Him because of the word of the woman who testified, ‘He told me all that I ever did.'” Jesus had spoken to a Samaritan woman by the well and shared the Gospel with her. She, in turn, went back to her city to share the Good News. Wu noted that the verse said that only reason people believed Jesus was because of the word of the Samaritan woman. Wu told the congregation about the Rainer scale, a concept taken from the book The Unchurched Next Door by researcher Thom Rainer. The Rainer scale states that only five percent of the world’s population is antagonistic towards Christianity; the remaining 95 percent is generally open to Christians sharing the Gospel with them.

The pastor urged the youth to focus on the 95 percent who were likely to accept Christ.

“The church is called to save the lost,” he reminded them. “Like fishermen, we need to cast our nets into the deep for a catch. If we let down our cell group nets for a catch, God can surely do mighty things through us.”

When asked about what she learned from Emerge Night 2016, Cally Ho, 17, a Secondary School student, said “Contrary to popular belief, it’s not that people do not wish to be saved. In actual fact, they are simply waiting for us to share the Gospel with them. After listening to this message, I feel that 2016 is the year for us to step out of our comfort zones and reach out to the lost.”

Deborah Lye, 21, an undergraduate, told City News, “My greatest takeaway is really a renewed vision to bring revival in our generation. Sometimes, I feel like I have done enough or tried hard enough to reach out to my friends, but after the session I was inspired to do more. I want to make a difference in someone’s life through the practical steps that Pastor Zhuang shared: to first bless the lost and meet their practical needs before sharing the Gospel with them.” 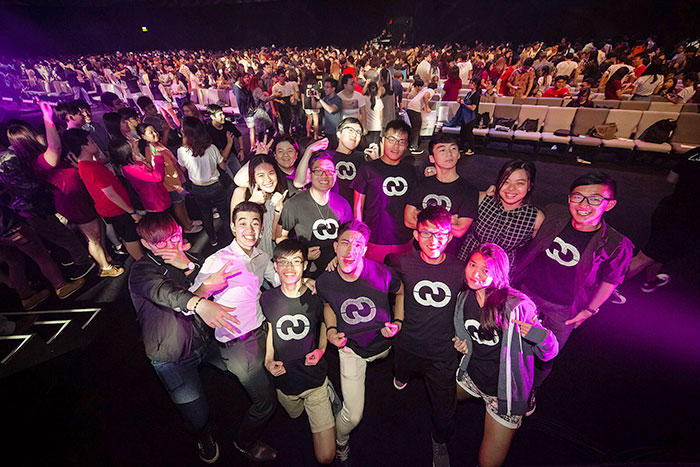