Post-Verdict CHC: Out Of The Ashes, We Rise

City Harvest Church’s services this past weekend capped the end of a painful chapter for the church and heralded the beginning of a brand new phase filled with hope. This past weekend was an important one for City Harvest Church. Last Wednesday, all six parties involved in the trial were found guilty of all charges. Sentencing will take place on Nov 20.

Standing before his congregation after praise and worship, senior pastor Kong Hee apologized and bowed before the people. “Pastor is sorry for the pain you all have had to endure under my leadership and watch,” he said. “Pastor is sorry, but hopefully, that season in the life of our church is in the past.”

There were few dry eyes in the auditorium as the people stood to their feet, cheering and applauding Kong, rendering their support and love to their senior pastor.

On behalf of the church board, executive pastor Aries Zulkarnain thanked everyone for standing steadfastly with the church. Expressing respect for the court’s verdict, he explained, “I think it is very important that as a congregation we understand what the judgment was really based on.” He noted that the judge had acknowledged that the six loved CHC and did not wish to harm the church, but that the judgment was based on wrongful use of funds. (See sidebar)

Zulkarnain also told the congregation that the board had taken significant steps to improve the church’s governance, including the renewal and rotation of board members to ensure independence, the setting up of an internal compliance team and a yearly internal audit (for details see box).

A FRIEND & A BROTHER

Standing shoulder to shoulder with the church this key weekend was long-time friend of CHC and advisory chairman Dr AR Bernard. At his request, the CHC worship team prefaced his preaching with the Chris Tomlin song ‘Our God Is Greater’. The lyrics go “Into the darkness You shine/ Out of the ashes we rise”—”I got goosebumps,” said Bernard.

Quoting Proverbs 17:17, which says, “A friend loves at all times, and a brother is born for times of adversity,” Bernard explained that being a friend is a choice. “A friend is someone you love and enjoy being with. There is a mutual sharing of affection, values and sense of purpose; a camaraderie that accompanies it. A friend is someone you can count on for support, that even when they lack the words, their presence speaks louder than any words you can offer at any time.” God gives us people in our lives for different reasons and in different seasons. Some stay around for a long time while some do not.

Proverbs 17:17 reminds what a friend and brother is. A friend loves at all times; friends are people that can always be counted on in spite of the apparent circumstances. They are the ones that will choose to stay even when you mess up or make wrong choices because they love at all times. A brother is someone bound to you—there is shared DNA and it goes deeper than friendship.

With that, Bernard said to the church, “I am not only a friend, but a brother to Pastor Kong and Pastor Sun.”

Bernard is the senior pastor of Christian Cultural Center in Brooklyn, New York. He is also president of the Council of Churches in the City of New York and sits on the board of the New York City Commission of Religious Leaders. PEACE OF THE BELIEVER

At Saturday’s service, Bernard focused on the subject of peace. He drew from the Gospel of John, in which the writer chronicled the deep and profound intimacy between Jesus and His disciples. Jesus demonstrated an attitude of service and humility to His disciples, an attitude that they were to have towards one another. It was an intimate time as Jesus told them that He would physically leave them, but that He would introduce the Holy Spirit that would take His place among them. The same comfort, love, direction, guidance, insight and understanding He rendered to them, would now be done by the Holy Spirit.

In John 16, Jesus began telling the disciples about upcoming incidents that will occur because of their relationship with Him. He prayed to God in John 17, preparing them for His impending absence as they were to be entrusted with the ministry, believing that they are the ones on which the foundation of the church will be built.

Jesus referred to two types of tribulation. Firstly, it is a period of time that would be the future of human history. Numerous times, Jesus attached the word “great” to it, referring to the Great Tribulation during which there will be unprecedented turmoil and conflict in the world. Secondly, in relation to John 16:33, the word was used to express affliction and suffering, which are rampant across the human race, not limited to the disciples.

Bernard explained that the cross Christians bear is the persecution they experience because they are identified with Jesus. John 16:33 bears a powerful lesson that only in Him, we can find peace even in the face of tribulation. “[The] world cannot give you genuine peace,” said Bernard, before bringing up the Christmas: “Peace on earth, goodwill to man”. More accurately translated, Bernard explains that it says, “Peace on earth amongst men of goodwill.” Hence, when one harbors ill intentions while expressing peace, it is not a legitimate agreement towards peace, but simply conflict put on hold. So what we call “world peace” is isn’t true peace.

Bernard reminded the congregation to discipline their minds in times of turmoil. The battle of faith is in the mind, he said. When he was walking on the sea towards Jesus, Peter only began to sink when he took his eyes off the Lord. Similarly, it is when one allows themselves to be distracted by surrounding circumstances then they sink.

“For the believer, peace is not the absence of trials and tribulations, suffering, persecution or pressure, but the presence of trust in God. If you’re not experiencing peace, it’s because your trust is not in God.” Bernard related, and “by deciding to focus on God, an inexplicable peace will overwhelm you; one that protects your heart, emotions, mind, thoughts and brings calmness and stillness. No matter how your future looks like, you know God is in control and He always has your best interests at heart.”

The Bible did not say God will eradicate all our troubles, but He only requires trust. The greater the trust, the greater the peace. Every relationship is based on trust; it can strengthen or weaken the bond. When we trust more in God and have greater faith in Him, we can have greater peace as we walk in Him.

“Peace is the central organizational factor in Christianity. It’s the umpire in dealing with God because though you can’t identify with His plan, there’s peace in you as you walk in Him,” said Bernard.

OUR IDENTITY IN CHRIST

Having established that he felt that peace had settled into the hearts of the leadership and the congregation of CHC, Bernard preached a different, upbeat message on Sunday.

He reminded the people that Jesus’ disciples too faced crisis from time to time, so that they could be more fruitful. “For every ministry, there must be a time of dependence on supernatural help,” he said.

Expanding on his Saturday message, Bernard took the congregation through Jesus’ words in John 14:6 — “I am the way, the truth, the life. No one comes to the Father except through me.”

“The truth” is the same yesterday, today and forever, said Bernard, noting that popular thought today is that everybody has their own truth. But “truth is not subjective; it’s not a menu, the truth of origin, purpose and destiny. One of the first things you must discover is who you are in Christ.”

The world is suffering from identity crisis, and identity is one of the four needs man has that can only be satisfied in God (the other three are acceptance, approval and a sense of belonging). “Identity has to do with self-concept, a sense of meaning and a sense of purpose.”

Identity crisis is a very real and serious problem in the world today, noted Bernard, adding that it is not just individuals who go through identity crises but institutions, nations and churches.

“One of the best things that Pastor Kong has done is to articulate your core values, your mission for this ministry,” the advisory chairman said, making note of the paradigms of CHC that Kong had imparted to the church earlier this year. “It represents clearly your identity.” 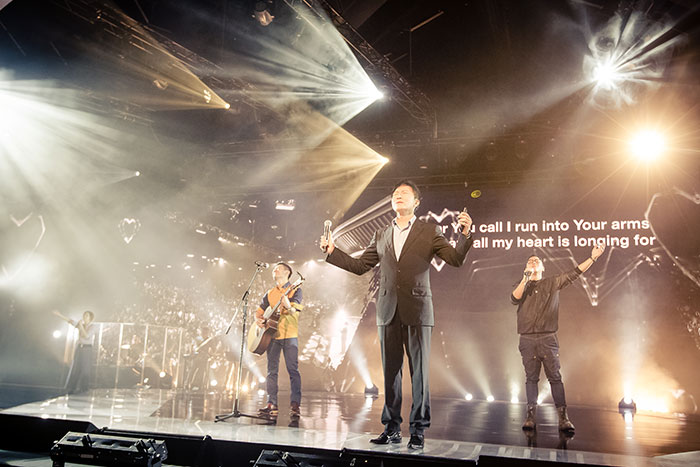 Drawing from his own church, Bernard explained that Christian Cultural Center has four timeless fundamentals: “These don’t change; methods and delivery may change. This ensures longevity.”

One fundamental he underscored was, “strength beyond the presence of any one individual”. He said, “The church must continue because it’s founded in Christ. It will outlast your lifetime.”

Bernard closed his message with a strong word of affirmation to the church. “I can tell you bluntly that the public was waiting to see if this church would collapse. Guess what? I’m here. You’re here. Every tree the Heavenly Father plants, no one can pluck out. You’ve been faithful, you’ve been consistent, you’re going to reap the harvest.”

AN EXCERPT FROM THE WRITTEN JUDGMENT:

Para 187 “I have no doubt that they loved CHC and had no wish to do any harm to it, and I accept that, in using CHC’s funds for the Crossover, they believed that they were using church funds for an evangelistic purpose that was not just permitted but positively mandated by the vision and mission of CHC, and which was supported by the vast majority if not the entirety of the congregation.”

Para 187 But saying that they believed they were using ‘church funds for church purposes’ is not an answer to the charges; so long as they intended to use CHC’s funds in such a manner that amounted to a wrong use in the knowledge that they were not legally entitled to do so, the element of dishonesty would be made out.”

The Board of CHC has taken the following action to improve the running of the church: