End Times Realities: How Near Are We To The End And Other Questions 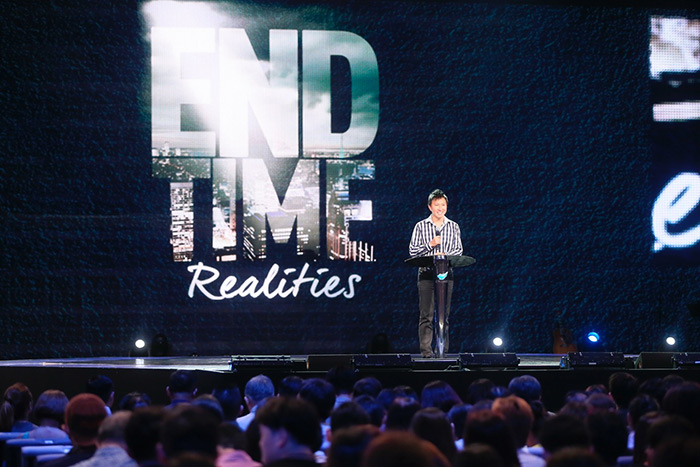 The end times and the Second Coming of Jesus Christ is a topic that’s constantly on the hearts and minds of Christians, yet deciphering what the Bible says about it is no easy task. To help members better understand what the prophets and Jesus Himself said about the end times, Kong Hee, senior pastor conducted a three-lesson Bible study series in the month of August.

Over three consecutive Wednesdays, starting from Aug 5, Kong expounded on the prophecies found in the book of Daniel, Psalms, Isaiah, Ezekiel and the Gospels. Putting together a timeline of events that are to come before the second coming of Christ, Kong taught on the signs that would lead to the rise of the Antichrist and the Great Tribulation.

The first week of the Bible Study saw the church’s premise at Jurong West packed to the brim. Almost 200 members were turned away at the gate and the young people filled the choir stand in order to make room for others. The eagerness to listen to Biblical teaching was evident. Kong commented, “In City Harvest Church, our members have a different kind of hunger, not for food but for the Word of God!”

Members who were turned away in the first week were given a free copy of the recording of the session. Undeterred, members continued to pack the venues at the subsequent sessions. 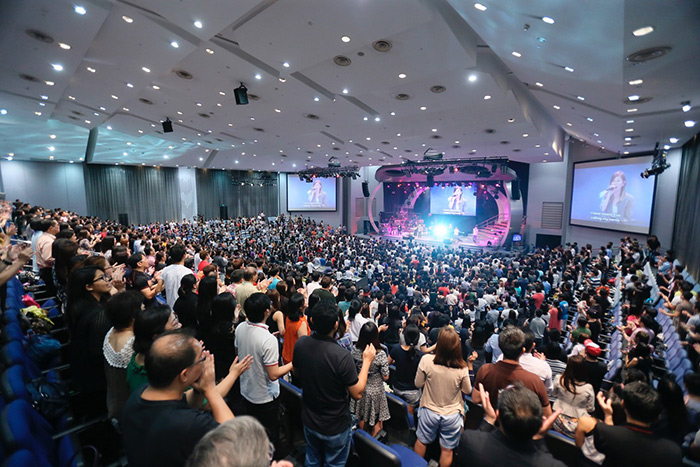 Kong began the Bible study by laying down the reasons why Christians should be concerned about the end times: Jesus often talked about the future and would rebuke the people for not being concerned about the future. Jesus also revealed glimpses of the future to His believers to give them confidence and so that they would find rest in Him. Kong urged the members to draw closer to Jesus as His coming draws near so that they understand that Jesus is ultimately in control and thus find peace in Him.

Daniel was a major prophet. While the book of Daniel contains just 12 chapters, it is one of the most important books in the Bible. Kong called it “the Old Testament equivalent of the Book of Revelations”. The senior pastor noted that Daniel was so accurate in his prophecies that he could see thousands of years into the future to the exact year Jesus was crucified.

“If Daniel was so accurate about the first coming of Jesus Christ, you know we need to pay attention to what he has to say about the Second Coming,” Kong said.

In the second chapter of Daniel, the prophet’s interpretation of King Nebuchadnezzar’s dreams prophesied the rise and fall of four kingdoms—the Babylonian Empire, the Medo-Persian Empire, the Grecian Empire, the Roman Empire—and subsequently the world order just before the Second Coming of Christ (Daniel 2:31-35). Cross-referencing Daniel’s prophecies with the actual events that happened in history, Kong noted that since the rise and fall of the four empires (represented by the different parts of the giant statue Nebuchadnezzar dreamed about) had already happened, and the world order during the end times—the rise of the “Group of Ten”—will probably happen as well. “When you see the Group of Ten forming, then you know that the end is near,” Kong said.

Isaiah 9:6 says, “For unto us a Child is born, unto us a Son is given; and the government will be upon His shoulder. And His name will be called Wonderful, Counselor, Mighty God, Everlasting Father, Prince of Peace. Kong taught that Jesus will return one day to form His physical Kingdom on earth but before that happens, the Antichrist will rise up. According to Daniel’s prophecy in Daniel 7, the Antichrist would come from the Group of Ten, but would not be one of the national leaders. He would be highly skilled in the art of negotiation and politics. He would reign for three and a half years, and during his reign, he would bring persecution to believers of Christ.

“When the end times draw near, we will be tested for our faith. When we see the Group of Ten rising up and the saints persecuted, we must lift up our heads and look at Christ, because anytime, Jesus will come back to rapture the church,” said the senior pastor.

Kong ended the first session encouraging the congregants to look forward to their reward in heaven (Revelation 2:12), instead of being fearful of the persecution that will come. BEGINNING OF THE END: THE TIMELINE

How will all the events and prophecies fall into place to signify the end of times? Kong presented an extensive timeline to illustrate each of the events in the 70-week prophecy found in Daniel 9:20-27. The timeline included events that have already taken place and events that will take place in the future.

In verse 24, Daniel prophesied that the Jews would have 70 weeks “To finish the transgression, to make an end of sins, to make reconciliation for iniquity, to bring in everlasting righteousness, to seal up vision and prophecy, and to anoint the Most Holy”.

The word “week” in Hebrews means “sevens”. When Daniel said 70 weeks, it meant 70 multiplied by seven, but he did not give the units to this figure, Kong explained. Studying the context of which the “70 weeks” was given, the pastor concluded that the unit must be years and not days.

Kong also explained that the “Most Holy”, mentioned in verse 24, is often used to describe the Holy of Holies in the temple. The first temple was the Solomon Temple, the second temple was rebuilt by Nehemiah and later destroyed by the Romans. In recent years, the Jews have been making plans to build the third temple.

“So when you see the third temple, you know the Second Coming is only years away,” notes Kong.

The most significant event in the timeline is the final seven years before the second coming, when the Antichrist would rise up (Daniel 9:26-27). In verse 27, Daniel prophesied that the Antichrist would “confirm a covenant with many for one week; But in the middle of the week he shall bring an end to sacrifice and offering.” Noting that the most complex political issue in the world today is the Middle East problem, Kong said that the Antichrist would probably sign a seven-year peace treaty that will please all the nations involved, fulfilling the prophecy of “confirm a covenant with many”. But in the middle of these seven years, the peace treaty will be broken and the Antichrist will force the world to worship him, according to the second part of the prophecy. Christians will then face severe persecution if they refuse to worship the Antichrist.

Now that they have this knowledge, how should the followers of Christ live? Kong shared five things from the Gospels that Jesus said His believers ought to do until Jesus returns: Do business, evangelize, encourage one another, pursue their reward and live in hope.

At the end of the second session, Kong, reading from Luke 21:29-32, presented his audience with different possible scenarios of when the Second Coming will happen, with the furthest date being just 53 years away. Kong spent the last session of Bible study going through three portions of the Old Testament that prophesied about wars in the end times: the great Middle East war in Psalm 83, the war of Gog and Magog in Ezekiel and the battle of Armageddon in Revelation. Seeing that there are mentions of earthquake, great hailstones and brimstones in all the Scriptures, Kong hypothesized that all three prophecies are pointing to the same massive world war.

“To answer the question of who is right, it is important to see what Jesus Himself said about the rapture,” Kong said.

Going through the three Gospels of Matthew, Mark and Luke, he explained six signs Jesus gave concerning the end times and explained his personal belief in the “post-Tribulation rapture”—that Christians would have to go through the period of severe persecution. He noted four signs (deceptions, rumors of wars, famine, disease and disasters) that Jesus gave concerning the end times–Jesus called this the beginning of sorrows. In Matthew 24:9-22, Jesus spoke about the next sign, which was the period of Tribulation.

“Who is driving this persecution here? The Antichrist,” Kong said.

2 Thessalonians 2:1-2 says, “Now, brethren, concerning the coming of our Lord Jesus Christ and our gathering together to Him, we ask you, not to be soon shaken in mind or troubled, either by spirit or by word or by letter, as if from us, as though the day of Christ had come.” This means that the rapture and the second coming of Christ would take place at the same time.

Furthermore, Matthew 24:22 says, “And unless those days were shortened, no flesh would be saved; but for the elect’s sake those days will be shortened.” The “elect” here refers to Christians.

The next sign of the end times is the cosmic blackout mentioned in Matthew 24:29-30. The second coming of Christ will happen immediately after the blackout and in verse 31, “He will send His angels with a great sound of a trumpet, and they will gather together His elect from the four winds, from one end of heaven to the other.”

“This is the rapture!” Kong said. “Note that the rapture and the Second Coming will happen at the same time, and this is the first time Jesus mentioned the rapture–there is no earlier rapture.”

The final sign of the end times is found in Matthew 24:37-41. Jesus said that the second coming would be “as the days of Noah”. Kong explained that Jesus comes back to rapture His people because God would judge the wicked after the saints are taken into safety. The Antichrist would then be cast into the lake of fire and Satan into the bottomless pit. Christ would then start His 1,000-year Millennial reign.

In closing, Kong encouraged the congregation to not be afraid of the Great Tribulation, but “be of good cheer, I have overcome the world.” (John 16:33) Kong summed up the three-part series by stressing the need for every member to live their lives fully for the glory of God, while knowing that Jesus could come back within their lifetime.

“Let’s make God the whole pursuit of our life, doing His will. In the last days, let the whole world know of your love for God.”