Here in Singapore last weekend to preach at City Harvest Church’s weekend services, long-time friend and spiritual father John Avanzini fielded questions from City News on some less straightforward issues about the giving of one’s finances to the church. 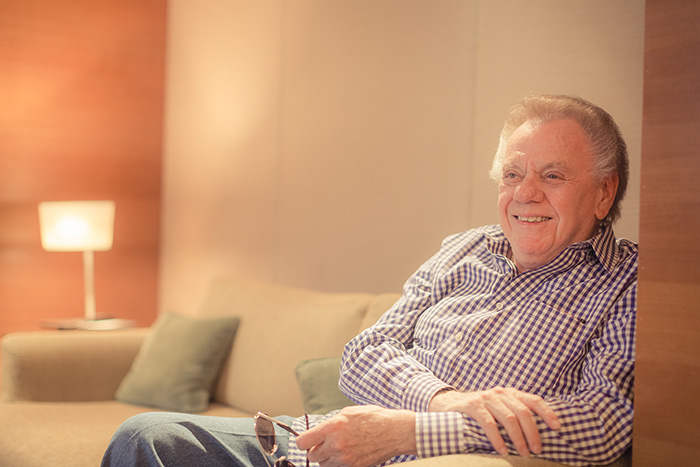 What do I do if I cannot agree with my spouse on the amount to pledge during this season of Arise and Build?

The Bible says that we should let the peace of God rule in our hearts. They must come to a point where they are both peaceful about the amount. Insistence on what they feel the Lord says to do is important but not to a point of argument. One of the hardest things I think is when one has a word God gives them and the other one just doesn’t agree. The latter probably needs to pray and find out what God is saying. This is a difficult thing to settle. The peace is really what needs to be strived for. Every time a couple settles a dispute with the peace factor as part of it, it brings them nearer to harmony in their marriage; so after a few years, they’ll start coming up with the same number. It’s part of the journey toward oneness that God wants for a couple. Deal with it prayerfully, peacefully and lovingly.

Have you encountered this in your own marriage?

Yes quite often. Sister Pat always wants to give more than me, but I do acquiesce to her, because she has more faith than I do—she proved that when she married me! She’s a woman of great faith to have even associated her life with mine (laughs).

I have also learned that she hears God on the giving of money better than I do; I’m generous but she’s really liberal. One time, I was given an antique automobile, so I had it for a few weeks. Then one day I went for a meeting and came home, and I asked her, “Where’s my car?” She said, “I gave it away.”

What was your response to that?

“I love you, darling, you’re so wonderful, thank you for helping me to have more space in the garage.”

Filial piety is a big thing in our Asian culture. What if I am a child who wants to give to the church but I get chastised by my parents for giving the money to the church instead of to the family?

I think it has a lot to do with age and submission—there is a certain age (and not just in Asian but proper Caucasian families) after which children are no longer looked on to submit to the elders, but maybe in the Asian culture that is for a longer period.

Sometimes I tell people what I give, and sometimes I just don’t tell them. Jesus said, don’t let the right hand know what the left is doing.

If they know how much I’m giving and are upset by it, then—and this is not Bible advice, this is my personal opinion—I would say to my parents, “God told me to give X amount. Should I do what God wants me to do, or what you want me to do?”

How can I stand fast on a pledge I have made and not become doubtful or swayed or even offended when I don’t get blessed after giving?

You know … if I were to make a pledge I can’t keep, of course, firstly I would do everything I could to meet it, then I would go where the pledge was made, and I would come with a peace offering and asked to be released from the remainder of the pledge. You would not want to just leave it undone, satan will beat you up with it.

Most people don’t know this, but when pledges are taken, most of the time people are not told what to do if they can’t meet the pledge. So when they fail to do so, they lose faith, have a lot of internal strife.

Let’s say the person has fulfilled the pledge—not without some difficulty, perhaps, and he’s waiting for his breakthrough and it doesn’t come soon. How does this person stay unoffended?

You remember when the angel was called by Daniel and it was 21 days that satan had held him back? Many times things don’t go the way it should … like, for instance—I can’t give all the details—but I came into a meeting, and I had a large offering that I raised for the church, and they gave me a check for my honorarium, and it was the amount of what I had pledged, right down to the dollar. Then got a phone call, apparently there was confusion on the board of the ministry, they said the amount given to me was too much. I said, I still have the check, I will give it back. See, I had made the pledge, God had provided it, but man stepped in the way. So I now have to make other arrangements (to fulfill the pledge) but if I couldn’t make those, I would have had to ask for release from the pledge.

So many times, we pledge the right amount, and somebody doesn’t listen to God. I realize that I could have made the pledge but I would have to turn all sorts of things upside down, and that wasn’t God’s desire—God didn’t give me that desire in my heart to cause chaos in my finances. He gave it because He knew it was coming from here and He could move it where He needed.

What if I am just sitting on the fence—and I’m feeling hesitant or not fully confident of giving, especially in such a season that the church is in?

I feel that there were people sitting on the fence when Pontius Pilate had his decision to make. Would it be a guilty verdict or an innocent one for Jesus? And some, when He was pronounced guilty, gave nothing. Others went and became some of the most famous people that ever lived—Peter, Paul, James, John. They did not let Pontius Pilate decide what God wanted them to do. But you know, here’s a strange thing—I will give a thousand dollars if somebody can give me the name of one who stayed on the other side of the fence. Everybody knows the names of the ones who crossed over, and said, Pontius Pilate is not my God. Jehovah is my God. Amen!

Last question—what are some tips you can give for “responsible giving?” For example, do I give when I am in debt/ financial difficulty?

I am supposed to be retired … I am 79 now; I retired when I was about 71 or 72. But I have continued to give, because my income depends on my giving. I live on my harvest. Now that I have less income, I need more miracle money, so I surely give. I had salaried money before; now I need miracle money. That comes from seed. Maybe my seed isn’t as big to the person who receives it, but it’s big to me. The size of your gift is not how much you give but how much you have left after you give.

So every day, my daughter Yvette gives more than Donald Trump or Bill Gates. We applaude when the hundred thousand gift is given, but Jesus identified the woman with the two mites. If you look at the Scripture, it says she gave all that she had, even all her living, while the big guys, who were giving much, gave out of their surplus. She took everything she had for that day’s living, and gave it. Go back and look at that Scripture—there’s a big piece of philosophy of life in that portion.

This dark cloud has gone over your ministry. I give you a word: David would have never been king if he hadn’t fought Goliath. The truth is this, Goliath is a king-maker. And if your Goliath knew what they were doing, they would leave you alone. They’re gonna make kings and priests of a whole new dimension out of the City Harvest people.