Remembering Our Destiny, Embracing Our Identity

City Harvest Church celebrated its 26th anniversary on the weekend of August 22 and 23. Themed “Remembering Our Destiny, Embracing Our Identity,” the anniversary services provided not just a reflection on the church’s history, but also a vision for its future. There was a tangible air of expectancy and faith in the auditorium as the congregation was led in a vibrant time of praise and worship. Guest pastors who were friends of CHC such as Rev Dr Yonggi Cho, Rev Dr A. R. Bernard, Pastor Mark Conner, Bishop Dick Bernal, Rev Dr Dominic Yeo, Rev Jeffrey Rachmat, Rev Casey Treat and Rev Dr Chang Mao Song also sent their well wishes via video greetings.

CHC’s creative department put together a stunning masterpiece showcasing the humble beginnings and journey of CHC through video interviews with the early and longtime members of the church, as well as live dramatic portions acted out by members of the drama ministry. Opening with a bus flashback, the video was reminiscent of the moment CHC founder Kong Hee had the encounter with Jesus that eventually led to the founding of CHC. The masterpiece fully demonstrated the indomitable spirit of CHC leaders and members. Senior pastor Kong started presenting the CHC Paradigms from the start of August, so that the church would have a clear understanding of its DNA, as well as its direction for the future. Continuing in the same vein, the anniversary service aimed to establish the church leadership and CHC’s ten-year vision.

Kong first thanked the church for allowing him and co-founder Sun Ho to be sent out from the church for missions and the Crossover from 2002 to 2010. He also thanked them for giving him time off to prepare for the trial from 2010 to 2015. “The role of leadership is to find, recognize and secure the future. In the next ten years, I will still be in my prime. I’m looking forward to lead this church into a more glorious future for the glory of Jesus. How does CHC 2.0 look like? I want to be here for you. I want to be your in-house, resident senior pastor, just like the old Hollywood days. Sun and I want to grow old together with you,” Kong proclaimed to applause from the congregation.

Kong also gave special thanks to all the past and current CHC staff who toiled over the years in support of all the church’s local and overseas work, taking pay cuts and forfeiting bonuses, without complaining from the pressures they faced. In the next ten years for the staff, Kong expressed his hope that they would lead healthier, happier and more balanced lives, with sufficient rest, renewal and refreshing, with time for their families and to see their kids growing up. 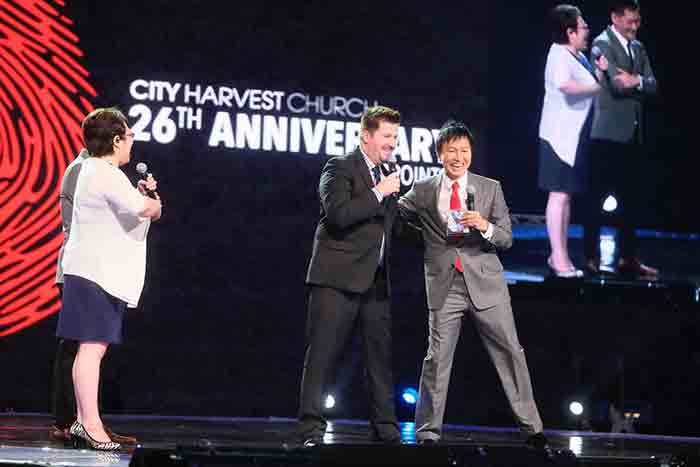 For the rest of the church, Kong encouraged them that their best days were ahead of them. “God has pruned and purified the church in the past five years of trials and tribulations, and those that are true will stand the test of time.”

PURSUIT OF GOD
One of the most important, perhaps the most important CHC paradigm is: the pursuit of God is the whole purpose of life. Kong recalled the weekend of June 30 to July 1 in 2012, after some of the church leaders had been charged. The congregation experienced one of its darkest days, and yet, the members filled the auditorium that weekend in prayer and deep worship. Kong pointed out that a senior pastor commented that the church had a deep devotional life. He then exhorted the congregation to always pursue God, no matter what lay ahead.

PASSION FOR GOD’S WORD
Kong commended the congregation for its overwhelming response at the recent church-wide Bible study on End-Time Realities. Thousands squeezed into CHC’s Jurong West and Suntec premises on a weekday, over three weeks, demonstrating their love for the Word.

In the last 26 years, CHC has covered 37 books in the Bible through its weekly sermons. The Bible study curriculum has also been revamped this year, offering 18 modules that take a new convert all the way through to maturing as a leader in the house of God. Challenging the congregation, Kong declared, “This is CHC 2.0 … raising up a new generation of Christians who love the Word, keep the Word and obey the Word!”

PREPARATION FOR THE HARVEST
“Is it possible that God has given us the revelation of Marketplace ministry and the Cultural Mandate for such a time as this?” asked Kong. Laying out statistics of the world’s population and the Christian population in the world, he placed the vision of world missions before the church. “We could see a mighty revival in our time! In CHC 2.0, I see a church mature in missions and church-planting. We already have the experience and the tools. I believe God is preparing us for the biggest harvest ever in the history of the world,” he said.

Addressing the next generation of City Harvesters, “CHC 2.0 is a church with a spiritual and holistic children’s program. In the next ten years, Kong calculated that there would be a baby boom of at least 10,000 babies. As such, the church will need to have comprehensive children’s ministry, marriage and parenting support network. PAVING THE WAY FOR THE FUTURE
Through exercising an austerity drive and receiving higher-than-expected dividend returns, CHC still holds onto 39.2% of Suntec REIT shares, in spite of the a significant drop in attendance, as well as tithes and offering collection, due to the trial. To achieve self-sustainability (no longer needing to raise building fund), the church would still need to raise $60 million over five more annual Arise and Build campaigns. Once this is achieved, the current generation of City Harvesters would have laid up an inheritance for generations to come. The upcoming Arise and Build pledging weekend will be held on September 26 to 27.

In a move that strengthened the church’s top leadership, co-founder Sun Ho was officially ordained as a Reverend. She will be supported by Executive Pastors Aries Zulkarnain and Bobby Chaw, who also oversees School of Theology, Chinese Church & Missions. Ordained ministers Dr Michael Scales, Canon James Wong and Dr Paul Kim laid hands on Sun and she was also gifted Kong’s very first Bible. Sun’s ordination certificate is endorsed by Kong, Rev Dr Yonggi Cho, Rev. Dr. Phil Pringle, Dr A. R. Bernard and Rev. Abraham Ku. Sun also received a plaque from Church Growth International, presented by Dr Kim, on which these words from Dr Cho were engraved: “Shepherd the flock of God which is among you and when the Chief Shepherd comes, you will receive the crown of glory that does not fade away. May God grant you peace and happiness as you answer His call.” Four other pastors were also officially ordained: Pastor Maria Tok, who oversees the Dialect Church, and Pastors Lee Yi Lun, Daniel Lim Junxian and Veronica Tang, who oversee their respective zones. Kong also invited the various pastors, heads of departments, and ministry heads onstage to stand before the entire church, giving a clear view of the leaders who would live out CHC 2.0. Before the service ended, the congregation celebrated Kong’s 51st birthday, bringing a warm close to the 26th anniversary service.

Entrepreneur Cheong Hui Min, 22, shared her sentiments: “I feel that the church is placed in very safe and steady hands. I have full confidence that Sun and the rest of the leaders will steer our church forward with much wisdom and anointing, and lead our church deeper into God’s call for us.”