This week is the final week of City Harvest Church’s Arise and Build campaign for 2014/2015. Church members share testimonies of the goodness of God this season. City Harvest Church mounted its first “Arise & Build” campaign in 1996, back when its worship services were held at the Hollywood Theatre.

The term “Arise and Build” is taken from Nehemiah 2:20, in which the prophet Nehemiah called for the people to rebuild the city walls of Jerusalem. “For us at City Harvest, Arise and Build holds more than just building buildings or securing worship premises,” says worship leader Serina Perera. “To us, Arise and Build is also about building lives. CHC is a place where the broken can find restoration, the sick can be healed, and the lost can be saved. Every Arise and Build is a season for us to renew that commitment and dedication to build the house of God and all who dwell in it.

“We never give in order to get something back from God, but He is constantly surprising us with His mighty love.”

Here are testimonies received from church members who received miracles and blessings as they gave to Arise and Build:

“Weeks after my brother pledged to the Building Fund, he called me one night to tell me that he had earned back 10 times the amount of what he pledged. He couldn’t wait to go to church just to fulfil his Building Fund.”

“I have just been headhunted to be a franchise manager in a multi-national pharmaceutical company. This came right after I gave to this Arise and Build campaign. I have been giving to the Building Fund since 2001. For someone without a university degree, I have been promoted seven times in the last 14 years. I truly believe in God’s law of sowing and reaping.”

“During this Arise and Build campaign, I pledged to God an amount that I never pledged before, because I strongly felt that if I don’t build my church then who will? In every single Arise and Build campaign, God has blessed me in ways I never thought of or imagined. My husband and I were trying for a baby after being married for a year. Shortly, in less than two months after I pledged, I conceived. Not only that, a few months before this Arise and Build, I switched to a new job with a 15 percent pay increase and a promotion to manager. Truly, as we build God’s house, He will build ours!”

“After pledging and fulfilling my Building Fund, God told me that He is bringing me into a new season of blessings and positive challenges. First, my job scope was enlarged: from a position as administrator to the managing director, I became the administrator to the vice president in our regional office. Second, I received a 10 percent pay increment despite increment percentages dropping in the company. Finally, I received a four-digit cash bonus for my insurance policy, covering my policy premium for the next 10 years! 2015 is a year of breakthrough!”

“My wife and I felt very challenged to sow during this Arise and Build campaign. While we were excited in our hearts, we were facing the reality of increasing costs in the family due to our newborn baby last October. However, we trusted God that when we build His house, He will build our house. At the same time, we were praying and believing for my family’s salvation. At the end of last year, my mother became open to God and we brought her to church where she gave her heart to Jesus. She started attending church every Sunday and even invited my father to attend church with her. My father used to be averse to Christianity, but within a month of attending church with my mother, he too gave his life to Christ. Today, both my parents are not only saved and attending church regularly, they are also attending Bible study classes to grow in their walk with God. Truly when we build God’s house, we will see His mighty work in our families.”

“Shortly after my boyfriend proposed to me, it came time for Arise and Build pledging. We gave the best that we could in the midst of applying for a flat. We were hoping for a built-to-order project near my parents’ home. We put in our first application and were overjoyed to find out that our BTO queue number was 19 out of the 1,400 applications, hence we managed to select our desired unit. We didn’t have high hopes for the government housing grant for lower income families as our combined income exceeded the ceiling. But God is so good! We were blessed with a $35,000-housing grant that covered more than 10 percent of the flat price. We later on found out that based on HDB’s calculations, they divided our total income across 12 months and pro-rated our income as my fiancé had only been working for three months. The average income amount qualified us for the $35,000 grant. We thank God for this blessing. We have reaped many times more than what we sowed into the Building Fund.”

“Since participating in Arise and Build 2014, I feel that my life has been renewed by God. My pay has increased by 25 percent since Nov 2014! God has also blessed me with a new job that I love and look forward to every morning.  In addition, I’ve been blessed with a new home to live in. Praise God!”

“I grew up in an average family, and after my sister and I received Christ eight years ago, we often wondered how and when our parents would receive salvation. At the end of last year, my dad was asked to resign from his company. Although he had worked there for nearly 20 years, he was not given any retrenchment package. My sister and I kept praying and asking God to work a miracle into our situation and bring the peace of God to our parents through us. In the next two months that followed, my parents were very worried about the household bills. My sister and I had just started working and our combined income was less than half of what we used to have. It came to a point where our mother was so worried that she went into depression. It was a very trying and difficult time for my sister and I, but we continued to attend church services and cell group meetings faithfully. Last year’s Arise and Build was without a doubt the hardest one for my sister and I, but we chose to trust in God and in His goodness.

“Shortly after we gave to Arise and Build, my sister’s boyfriend’s mother, Aunty Daisy, who is a Christian from another church, began reaching out to my mom and inviting her to church. Then one day, my mother agreed and went along with her. From that week onwards, my mom started attending church and cell group regularly with Aunty Daisy. She grew more joyful and was very excited to hear the Word of God. Together, we are working on getting my Dad to go to church together with her.

“Many people might think that my sister and I were silly to give to the Building Fund especially when our family was in financial lack. But in our darkest times, God’s light shines the brightest. One of my greatest joys now is spending time with my mom, learning the Word of God and sharing revelations together. We are believing and praying for my dad to receive Christ into his heart.” 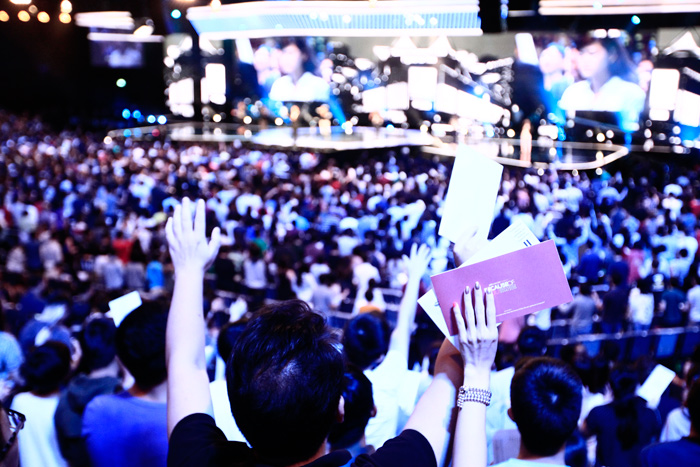 “We have been giving to Arise and Build every year without fail. And every year, God has blessed us with pay increments and bonuses. Significantly, John was promoted to Head of Department in 2013. That year, he also received a sponsorship of $25,000 to study his Masters in Social Work. To get this scholarship, he had to go through a panel of interviews. It was intense but by God’s grace he made it.

“Last year for Arise and Build 2014, we sowed our biggest amount to the Building Fund—it was a five-figure sum. As we pledged, we believed and trusted God to grant us the desires of our heart, to have a child of our own. Praise God, we are expecting our baby in August 2015!”

“When I made a pledge to Arise and Build in 2014, I was reminded of how God led me to City Harvest Church and how my life has been transformed. The Lord told me that just as Jesus grew in wisdom and stature, and in favor with God and men, my life in marketplace would emulate the same thing.

“In December 2014, God gave me the opportunity to invite seven colleagues and marketplace acquaintances to our Candlelight and Christmas Services. I believe that the seed of the Gospel has been planted in their hearts as a result.

“Recently, after six rounds of gruelling interviews, I secured a new job in a billion-dollar MNC with a 40 percent pay increment and five more days of leave. The whole package works out to be 400 percent of the amount I had pledged for the Building Fund! Praise God!”

“I just started working in July 2014 but I received my year-end bonus which was three times my pledge amount for Arise and Build. I wasn’t expecting to receive any bonus as I am still new in the company and it is my first full time job after graduating.”

Keith was struggling in his business before the Arise and Build campaign. He gave toward the Building Fund, believing God would bless him. Now his business is doing so well that he needs to employ two full time staff to do deliveries for him.

During 2014’s Arise & Build, Joyce Chen pledged an amount to the Building Fund in spite of her upcoming wedding. As she gave to build God’s house, she was blessed in return. Joyce had just started working in a new company last year and did not qualify for a bonus, but she received an unexpected bonus! But God’s blessings did not stop there. Joyce has been going for physiotherapy which she has been paying for. Recently, she received an increase in her insurance coverage and medical package which covers the cost of all the therapy she requires.