Many questions were raised during this tranche, particularly during the testimony and cross-examination of Kong Hee. City News Weekly addresses some of these.

WHAT WAS THE PURPOSE OF PURCHASING THE 30,000 COPIES OF SUN HO’S LONELY TRAVEL? Lonely Travel was the most effective evangelism tool of all Ho’s albums. CN PHOTO FILE

Minutes for the 21 Aug 2004 CHC board meeting showed that “the board has decided to buy the following number of CDs from Xtron Productions Pte Ltd to be used for the purpose of CHC mission outreach globally. The CDs will be given from time to time as gifts to visiting ministries as well as overseas churches that CHC will minister to for the period from July 2004 to December 2006, being testimonies of CHC’s Crossover mission work. The CDs will be expensed off in 2004.”

Kong Hee told the court that “… Lonely Travel especially, has been the most successful album and the most effective evangelism tool of all the Asian albums. So there was a demand, even after the promotion period was over, among our affiliate churches to use it as evangelism for their own communities in the various parts of Asia.”

CHC spent $581,000 to buy 32,500 copies of Lonely Travel as well as all remaining copies of Sun With Love and Sun*Day albums. The court also heard that Lonely Travel reached platinum sales in Asia, meaning that it sold over 100,000 copies before the excess inventory was bought by CHC for missions.

DID WAHJU HANAFI REQUEST FOR A REFUND OF HIS BUILDING FUND TO GIVE TO THE CROSSOVER? WHAT IS OUR CHURCH’S REFUND POLICY THEN AND NOW? Today, however, the church has a much clearer policy regarding donations. The church’s offering envelopes and website clearly spell out what the donations go to paying for, and that there is a no refund policy:

• All donations to the church are voluntary and non-refundable.

• Official receipts will be issued only for donations specified as tithe and/or building fund.

No, board meeting minutes of Xtron held on Saturday, Nov 24, 2007 recorded that Sun Ho waived her royalties totaling close to $200,000 from the Lonely Travel and Gain albums between 2003 to 2006. In 2008, Ho further waived close to $17,000 of royalties for her Embrace album. According to an agreement between Ho and her then-management company Xtron, Xtron donated Ho’s royalties to the building of schools in various provinces in China: Chong Qing, Liao Ning, Gui Zhou, He Nan. Xtron also made donations of just over $100,000 to the building of schools in partnership with Ho’s humanitarian efforts.

DID SUN HO ACTUALLY SING AT THE 2008 BEIJING SPECIAL OLYMPICS? 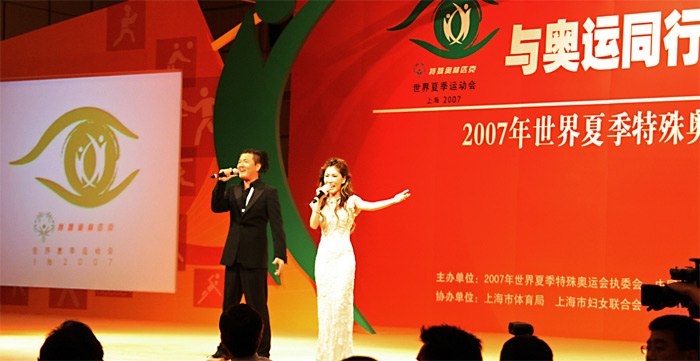 Contrary to allegations that this song was not an official Special Olympics song, four events corroborate the authenticity of this song.

Aug 10, 2007: The official theme song “The World Has You And Me” was selected out of 573 entries. It was announced on the Special Olympics official website.

Aug 11, 2007: The theme song was announced at the “Pu Jiang Night” charity dinner held at Shanghai International Convention Centre. This was reported on the Chinese government website Big5.gov.cn. It was also reported on the Beijing Olympics 2008 website.

Aug 28, 2007: China Central Television (CCTV) reported: “Directors Huang Zhen Zhen and Huang Qiu Tai came to Shanghai to film the music video of the theme song for the Shanghai 2007 Special Olympics World Summer Games, and they have invited Xu An Hua to be the consultant for the MV. Sun Nan and Singaporean singer Sun Ho were appointed to be the ambassador of love and to sing the theme song.”

Sep 3, 2007: For the actual opening ceremony, the executive producer Don Mischer invited Quincy Jones to compose another theme song “I Know I Can”, which was performed at the opening ceremony instead of “The World Has You And Me”.

WAS THE CROSSOVER SECULAR OR SPIRITUAL?

Sun Ho with children in Haiti after the 2010 earthquake.

The Crossover began as a mission of the church in 2001. Worship pastor Sun Ho was slated to record a contemporary Christian music album, but a professional music producer suggested marketing it as a secular album for wider reach. The first album Sun With Love did well, and the second,  SUN*day achieved double platinum in Singapore. Ho began to tour around the region, and at the end of her concert, during which she shared her testimony, Kong Hee gave an altar call and they saw thousands receiving Jesus Christ. It grew evident that the masses were attracted to Ho’s secular persona and music, and this was a good opportunity to reach the unchurched in places that were not friendly to the Gospel.

After the Roland Poon incident, the decision was made by the board to separate the church from the Crossover Project. The Crossover Project can be seen to have two dimensions: the Crossover album was the secular dimension, and costs for the music videos and album production were borne by Xtron and Ultimate Assets. The second dimension was the Crossover Mission, which conducted outreach concerts and won the lost to Jesus Christ. The cost of sending missionaries and conducting followup were borne by the church. Neither the album nor the mission could exist without the other. There are many other questions that remain, many of which cannot be answered
yet as the trial is still ongoing and what is written may constitute subjudice.
City News Weekly aims to address these at an opportune time.

The fruits of the Crossover Project were many. From no affiliate churches in 1995 to 13 of them in 2002, CHC today has 77 churches in its network and six Bible schools in three countries. Nearly 140,000 souls were saved through the Gospel concerts, mostly in the Asian region. The plan had been to replicate this in the US following the eventual album launch in 2010.