Dr AR Bernard: On Framework And A Man’s Responsibility

A framework provides balance by looking at the context of any message and the things the Bible has to say about a particular idea, taught AR Bernard. 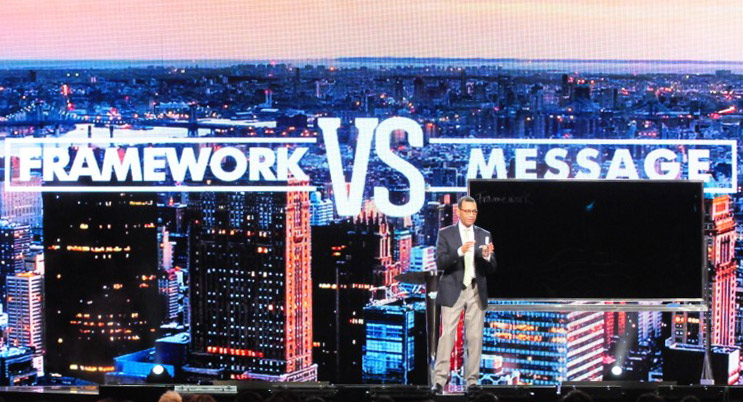 “God is a God of structure and order. He works within a framework, according to a pattern and based on a principle.” Dr AR Bernard shared with City Harvest Church over the weekend of May 3 and 4.

Bernard is the founder and CEO of the 33,000-member Christian Cultural Center in Brooklyn, New York. He also serves as CHC’s advisory chairman. He centered his teaching at CHC that weekend on the importance of understanding framework.

The preacher opened his message by telling the church a conversation he had had with another church leader recently. The leader commented that Bernard has a unique perspective because he does not subscribe to a specific denomination.

“I don’t pursue denominations but I pursue truth because that is what saved me. There are times when truth can challenge your denominational group and the beliefs of your group,” Bernard said. “If you are constantly on a journey to pursue truth, as what Jesus says in John 17:17, you will begin to develop a clear and articulate understanding between two words: ‘framework’ and ‘message’.”

A message, the preacher continued to explain, can be inspirational—in fact, messages can become movements, stirring the body of Christ to move in a certain direction. He named instances where messages sparked off movements and became denominations. Among them was John Wesley’s message that gave rise to the Methodist denomination and Martin Luther King Jr’s “I Have a Dream” speech that fueled the Civil Rights movement in the US.

Yet, while messages are powerful, they cannot take their audience to the next level of life. The reason is that messages are specific to a particular theme or idea and is thus narrow in their perspective. Bernard also observed that because a message looks only into a specific matter in the Bible, it can be taken to the extreme and become erroneous.

A framework, on the other hand, looks into all aspects of Scripture. It provides balance and protects the believer from going to extremes. So when a verse says that healing is good, the reader needs to look at the other verses in the Bible to see what they have to say about healing and if all that is said, agrees.

“Anything taken to the extreme becomes an error, even truth,” warned Bernard. “Although no framework is perfect–there will always be questions–we want to develop a framework that is spiritually sound for growth.”

“Very often, we move from message to message, without taking the time to build a Biblical framework. A framework is a lens that facilitates and influences perception and comprehension; it purposefully looks at the context of the message and what else the Bible has to say about that particular idea.”

Ecclesiastes 7:18 (NLT) tells us that, in life, balance is key. “When you have a framework, you can speak about any subject, and that subject will be balanced by your framework.”

Referencing Acts 20:27, Matthew 22:29 and Luke 24:27 (ESV), Bernard emphasized the importance of building a life within a framework that considers the whole counsel of God, not upon a sole message.

“The greatest threat to freedom is freedom, because freedom needs boundaries and rules to protect one from slavery,” he reiterated.

He illustrated his point with some examples. “A financial framework protects you from making unwise financial decisions. In the same way, successful spirituality is having a Biblical framework to protect you from extremes brought by very good messages. You need a framework for life which carries boundaries in which you think, live and make decisions.” “There are three things that a man struggles with in life: decisiveness, consistency and strength,” he added, to laughter from the congregation.

Decisiveness is defined as the ability to make decisions quickly and confidently, Bernard taught. The only way to do that is to have a set of guiding principles and values to live by, because every decision one makes is a value judgment–the decision determines which is more important and more valuable.

Consistency refers to a firmness of character; men with good intentions make promises, but men with good character keep them. Bernard continues to say that consistency requires one’s actions and values to agree; otherwise, hypocrisy is bred.

Lastly, strength is the courage to live out convictions; the things that one stands for and is willing to sacrifice for.

Teaching from the book of Genesis, Bernard examined the reason why things are the way they are today between men and women. In Genesis 2:18 (ESV), God had expressed His profound opinion through the creation of Eve–He would not have made man a helper if Adam did not need help. God did not ask Adam for his opinion or help when He created Eve. In Genesis 2:23 (ESV), Adam was astonished when he saw Eve, showing that men by nature are stimulated by sight.

“God designed women to be helpful, supportive and protective. When men do not understand this, they view a women’s desire to help as a desire to control,” said Bernard.

Genesis 3 depicts the fall of man that changed the initially harmonious relationship between Adam and Eve. Because Adam did nothing except watch while Eve was eating the forbidden fruit, the result of Eve’s disobedience is found in verse 16 which says, “He said to the woman: I will intensify your labor pains; you will bear children in anguish. Your desire will be for your husband, yet he will rule over you.”

Bernard explained that the word “for” here means “against”; thus, God said “yet men will rule over women.”

“When a man is indecisive, inconsistent and weak, the woman automatically seeks to exercise control and leadership in the relationship. There are three things that God and women want from a man: decisiveness, consistency and strength, ” Bernard concluded, challenging the entire congregation, especially the men, to live out these three qualities.

Ryan Pang, 23, an undergraduate, was moved by the sermon. “I understand more deeply the importance of the three qualities that God is looking for. It helps me understand my role as a man in ministry, in the cell group and in my family. These qualities will influence the decisions people make and allow men and women alike to be guided towards Christ-likeness.”

The Law, The Great Commission & The Common...