Everyone was a performer at Kenny Ahern’s show, “To Laugh Is To Live!”. A simple set-up—a variety of simple props and a myriad of simple acts, save for a couple of stunts atop a three-meter tall ladder. This pretty much sums up the performance by Kenny Ahern at Red Nose Theatre on March 21. Despite the simplicity of the act, non-stop laughter filled the entire Joyden Hall at Bugis+ throughout the entire duration of the show–a clear embodiment of the performance’s theme, entitled “To Laugh Is To Live!”.

Red Nose Theatre, organized by City Harvest Community Services Association’s Red Nose movement, marks the end of a two-week festival featuring the award-winning physical comedian, Kenny Ahern. Prior to the theater performance, held on Mar. 21, Ahern had visited schools, a home for the elderly, and a hospital, bringing laughter to the people there.

The greatest difference between Ahern’s show and others of the same genre lies in the element and extent of crowd involvement incorporated into his act. Ahern frequently invites members of the audience up on stage to participate in different parts of his performance, and the uncanny chemistry he develops with these participants without using a word, merely through body and facial language amazes and entertains all. There were no verbal exchanges between Ahern and his volunteers, save for a few sound effects he made to emulate the action or animal he was concocting, yet participants seemed to know exactly what he wanted, and could execute his instructions perfectly. At times, the volunteers even added some “personal touches” beyond Ahern’s instructions, triggering roars of laughter from the rest of the audience.

One such act was when he grabbed a handkerchief and handed it to a female volunteer. After which he snagged up another one and started tossing it toward her. The volunteer immediately got the idea and tossed her handkerchief toward him while grabbing on to the ones he threw in her direction, creating a juggling act between the two of them. Kenny Ahern subsequently proceeded to add more and more handkerchiefs into the exchange without breaking the momentum of the juggle. He finished off the act by grabbing hold onto the entire bunch of handkerchiefs and throwing them all in her face, earning huge exclamations from the crowd. The crowd roared even louder when she picked up all the handkerchiefs and returned him the favor–twice. 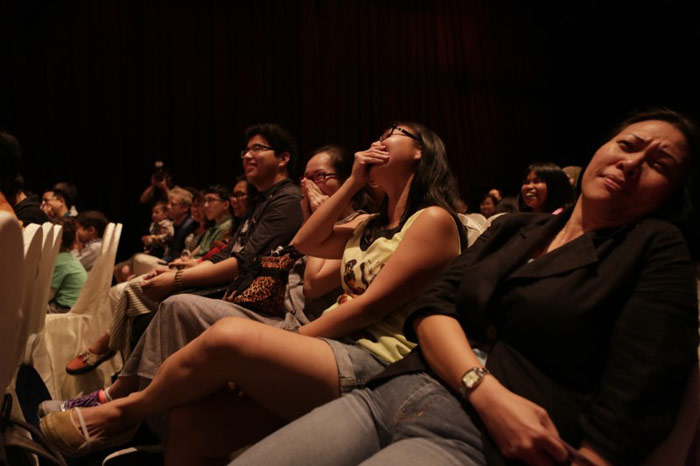 Ahern also used catchy tunes to maintain the momentum of his act. He would signal a new segment of the show with a new piece of music and fit the pace of the particular act to the rhythm and beat of the melody. His choice of music enhanced the mood of the act, giving the audience a more holistic experience of the by engaging both their eyes as well as their ears to not only watch, but also hear and feel the act.

Most performers find nothing more satisfying than the rousing applause they get at the end of the show. Ahern, however, chooses to direct all the cheers from the audience back towards his many volunteers throughout the show, as though to indicate that the true performers in this act were them and not him.

Audience member Lorraine Kok, 21, said that the show was a brand new experience for her. She found the experience thoroughly refreshing, and felt that the audience was fully engaged in the entire performance.

Eric Tan, 67, said that the performance was simple to understand, and brought great joy and laughter to the members of the audience, through the opportunities for them to participate and embrace the entire experience. “The acts touched the hearts of both the young as well as the old,” he added.

Get Ready To Laugh & Live

Red Nose Theater: There Ought To Be Clowns

Eat At Red Dish And Help Someone