The CHC trial continued with defense lawyers presenting oral submissions for “no case to answer”. 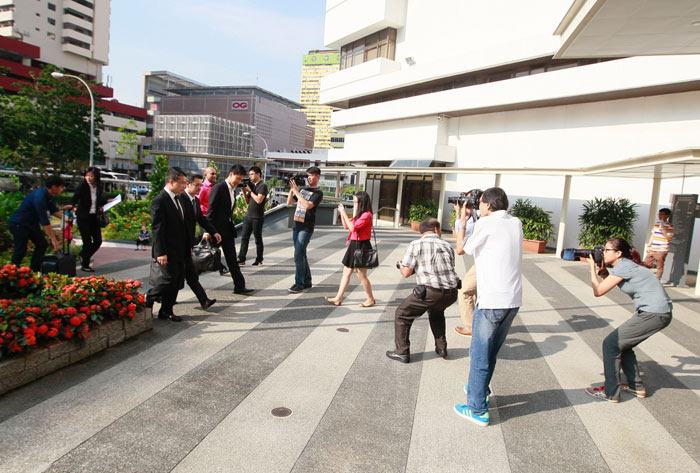 This morning in court, lawyers for both John Lam and Kong Hee argued that after 42 days in court, the Prosecution has failed to provide direct evidence or reasonable inference to prove that the defendants were in a conspiracy to misuse church funds.

The City Harvest Church trial resumed its third tranche with Kenneth Tan, senior counsel for John Lam, making a submission for “no case to answer” on behalf of his client. Tan sought to show that Lam, a member of CHC who sits on the management board and the investment committee on a voluntary basis, had limited involvement in the alleged conspiracy of using the church funds to invest in “sham” bonds for the purpose of funding Sun Ho’s music career. He added that Lam’s position is that the investments into Xtron and Firna were not sham and there was no conspiracy.

Tan argued that the investment of significant amounts of money into these two companies had a dual purpose: firstly, to obtain returns, and secondly, to further the evangelical purpose of the church through the Crossover Project. Tan stated that after trawling through all the evidence given by the prosecution in their closing submission, there was no direct evidence to show nor reasonable inference that Lam was part of any plot to invest the church funds into sham investments. Tan took the court through email evidence pertaining to issues such as the budgeting and projections of the Crossover, and showed that his client was not named or involved in any of these. He emphasized that the extent of Lam’s involvement was purely as a volunteer, and that, given Lam’s accounting background and role as a CFO in companies, his role in CHC’s matters has always been specific and technical: for example, he drafted the investment guidelines of the church and dealt with the auditors of the church.

Edwin Tong, defense counsel for Kong Hee, echoed Tan’s key points, underscoring that there was no direct evidence presented by the Prosecution that supported the charges against his client. He pointed out that the prosecution’s witnesses from Xtron and CHC had not given any evidence against Kong, and the only Baker Tilly witness who had dealings with Kong, Foong Daw Ching, testified that he could not remember anything. The charges were thus based on inferences but the inferences drawn were not reasonable, Tong said. It is the prosecution’s case that Kong is one of the conspirators and thus knew of the “sham” investments, yet the prosecution had not proven that there was a conspiracy to begin with, or that Kong had dishonest intentions, or that the investments were “sham”, or that Kong had the intention to conceal information from the auditors. The counsel argued that prosecution drew inferences of conspiracy based on the fact that Kong was the founder of CHC, that he was considered by the church board to be the most important person and that the key figure of the Crossover Project was his wife. The defense lawyer said that these facts alone cannot prove that Kong is involved in conspiracy.

He also reiterated that there was no loss to CHC: every single cent of the investment went into the Crossover Project, every cent had been made good. None of the six gained from the investments and none of the professionals—lawyers and auditors alike—involved in the bond agreement subscription agreement raised any issues.

Tong ended his oral submission objecting to two charges for the same alleged agreement—the Xtron bonds. The prosecution’s justification was that the period in which the Xtron bonds took place (Jan 18, 2007 to Aug 23, 2007) straddled the amendments to the Penal Code, but the defense lawyer argued that it was the same agreement and should remain a single charge.

The defense for all six defendants are making oral submissions for “no case to answer”, seeking the acquittal of the accused. In many cases, the judge may call the defense to take the stand to hear the defendants’ side of the story before giving his final verdict.

WHAT HAS THE PROSECUTION FAILED TO PROVE?

Sim Guan Seng, the present Managing Partner of Baker Tilly, the auditor for CHC, remembers John Lam as always forthcoming, and trying the best he could to assist in his dealings on behalf of CHC with the auditors. But as Sim Guan Seng testified, sometimes, although “he was trying his best to explain, but the impression I get is he doesn’t know.”

Allen & Gledhill’s written submissions for Kong Hee presented over 20 instances in the evidence where Kong had asked for the other defendants to check any decisions, changes and other with the church’s lawyers and auditors.

The truth is that Kong Hee continually pressed for the transactions to be checked with the auditors and lawyers after 28 July 2008. While he did not always make the distinction between the individual advisors (Foong Daw Ching, Christina Ng or Jimmy Yim) and their respective firms, the fact remains that Kong Hee only ever wanted for the transactions to be legitimate after it had been reviewed and approved by professional advisors. It is submitted that this is entirely inconsistent with the alleged dishonest intent that he has now been charged with.