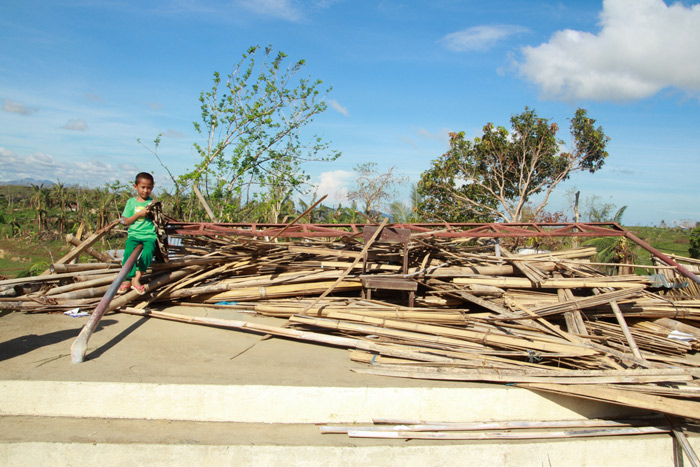 CHC’s third disaster medical relief team to Iloilo, the Philippines departed on Nov 26 and returned on the 29th. This group of 14 volunteers consisted of six doctors and eight volunteers, with the youngest being an 18-year-old student. The team also brought along medical supplies and relief packages for victims of Typhoon Haiyan.

On the three-hour drive from Iloilo airport to Estancia where their base was, Team 3 witnessed entire villages that had been destroyed: buildings were flattened, power lines were entangled, and families were everywhere trying to gather scraps from the rubble to build a shelter. They also saw handmade signboards along the way reading: “We need help”.

The moment Team 3 reached base Estancia, they divided themselves in three teams, setting up 10 mobile clinics so that they could reach as many people as possible. This team brought help to different barangays from Teams 1 and 2; they reached Ajuy, Tangubanhan Island, Bayuyan Estancia, Takbuyan Estancia, Canuan Estancia and Tabuan Estancia. Over their 10 medical clinic sessions, they treated a total of 2,021 patients. They also provided food and relief packages to 600 people. Beyond medical aid and sustenance, Team 3 helped the King of Glory Church in Iloilo rebuild the roof of the church building which had been ripped off by the typhoon.

With the mission to find a need and meet it, to find a hurt and heal it, Team 3—led by Dr Dalvinder Singh, a 27-year-old district health director in Sarawak, Malaysia—ministered in more places that needed help, reaching places that Teams 1 and 2 had not gone to. One such place was the hilly village of Ajuy, which is set on dangerous terrain and only accessible by motorcycle. It was very challenging carrying the equipment on motorbikes up the mountain,” said volunteer Lawrence Poh, 48, a registered nurse who is trained in emergency and pre-hospital care.“Sometimes the motorbikes had to ride through pathways at the edge of the mountain. One miss would have been fatal. But it was remote and they had almost no help, so we went. We were the first medical team that went all the way up.”

Another new area was Tagubanhan Island, where the situation was worse as many had lost their livelihood with all their boats destroyed by the typhoon; the people also had no access to medical care and relief goods. “I saw a lot of sick children on this island,” said Dr Tan Siew Pin, a 52-year-old pediatrician. “Some of these kids had chest infection or skin infection, but some also had other underlying chronic conditions but were unable to afford treatment in the city. Only a doctor or a midwife would visit this island once in a blue moon, so the villagers were happy to see us.” Besides providing medical aid and relief packages, Team 3 also provided spiritual support to the locals. At each clinic, some of the volunteers doubled up as prayer partners on top of dispensing medication or doing dressings. Through the prayers, the team saw the Holy Spirit move in a wonderful way. They saw many patients suffering from insomnia, traumatized after they saw their roofs being blown away together with their possessions and loved ones. After praying for them, many felt the peace of God fill their hearts and were able to sleep again. A number of patients were depressed, but after praying for them, they had tears of joy in their eyes.

“There was this little boy blind in the right eye. While praying for him, I just felt God’s love for him. After the prayers, the little boy was filled with so much joy. Whenever I see him, he would be beaming with a wide smile,” said Estella Chiu, the youngest member of the team. Dr Singh noted that, in total, 10 patients gave their lives to Jesus during the medical consultations. Throughout the trip, the team was amazed by the unity and hard work that they shared. “The work was intense. We had to wake up sometimes as early as 5.30am. The moment we reached the clinics, we had to max out the time since we had to stop at 6pm when daylight was gone. When we arrived back at our base, we would update each other on what had happened, pray and then sort out the medications and prepare the logistics for the next day. Usually we would only hit our beds at midnight, but the team always had energy the next day to do more,” said Dr Tan.

Her sentiments were shared by Poh. “I was touched by the teamwork and the togetherness of every team member, regardless of profession. Everyone put in their best and help one another whenever necessary.” The team said that they were blessed by the people they went to help. They were touched by the fighting spirit and the never “say die” attitude of the locals. Despite the disaster, many still put on smiles and pressed on with their lives. The volunteers from King of Glory Church gave of their time to serve the doctors as interpreters. Dr Tan was touched by her interpreter’s willingness to help when she found out that it took her interpreter three hours to reach the mobile clinic from her home which means that she had to travel six hours a day.

Team 4 is currently in Iloilo and will return later today.