The nerve-racking second instalment of The Hunger Games movies is worth the year-long wait. 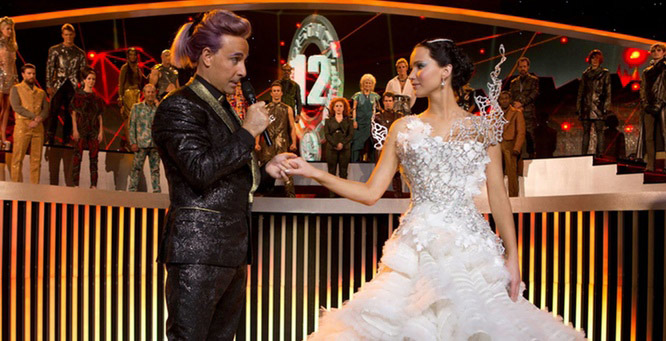 For someone who once dismissed The Hunger Games as just another teen franchise ala the abysmal Twilight, I did a complete about-turn after my 12-year-old made me watch the first movie with her last year.

In The Hunger Games, we are drawn into the dystopian world of Katniss Everdeen (Jennifer Lawrence). The country of Panem is divided into 12 districts, and she hails from the coal-mining District 12. To “commemorate” a war that happened decades ago, each year, two children from every district under the age of 18—a boy and a girl—are randomly picked at the Reaping. The 24 children—tributes—are then sent to kill off each other in an artificial arena, their every move watched by all of Panem. It’s Survivor meets Battle Royale. In THG, Katniss, together with her District 12 partner and onscreen love interest Peeta Mellark (Josh Hutcherson) outruns, outhides and outwits the frankly terrifying teen murderers from the other districts and the head Gamemaker to win the 74th Hunger Games—the first time the Games crowns two victors. While all of Panem is crazy in love with the star-crossed lovers from District 12, President Snow (Donald Sutherland) is furious that Katniss has outplayed his rules, and recognizes her for the rebel that she eventually becomes. THG was a finely packaged film with spot-on casting (by Debra Zane, no less). Its faithfulness to Suzanne Collins’ original book also won it a loyal following who could not wait for the movie adaptation of the second book.

Catching Fire picks up where THG left off: Katniss and Peeta are back in District 12, now living in elegant houses in the Victors’ Village. Their onscreen romance has fizzled back to reality—they were barely acquaintances when they were first Reaped, and now they hardly speak. Katniss receives an unexpected visit from President Snow, who threatens to destroy her family if she does not use the Victory Tour to help him snuff out the embers of an uprising that has been brewing since her and Peeta’s victory. Katniss has unintentionally become the symbol of rebellion for the masses. Her logo: the Mockingjay, inspired by a pin she wears throughout the Games. 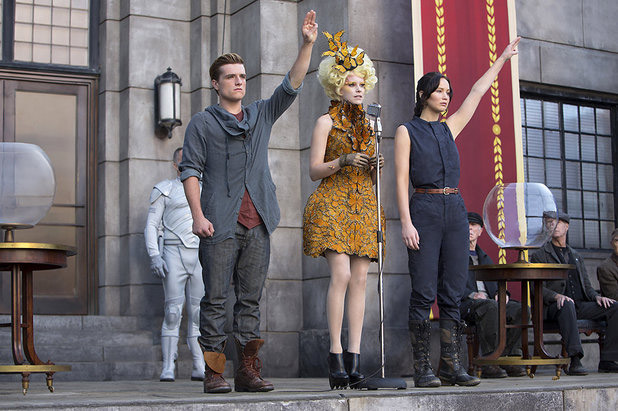 Katniss and Peeta, now reunited before the cameras, have to play lovers again. The Victory Tour is anything but. While they are under instructions to distract the citizens with their love story, the reality is that their presence fuels a growing unrest—everywhere they go they are greeted with the three-fingered salute, a sign of anti-government solidarity. “Peacekeepers” descend upon the districts to silence anyone who expresses such sentiments, but it is clear the unrest cannot be suppressed. President Snow is convinced that Katniss is the spark of the revolution that must be extinguished. He enlists the help of Plutarch Heavensbee (Philip Seymour Hoffman), who has taken over as head Gamemaker. He devises a diabolical arena for the 75th Hunger Games, and Snow announces that as it is the third Quarter Quell (like a special anniversary of the Games), the tributes would be Reaped from the existing pool of victors. Just after Katniss and Peeta announce their “wedding” to Panem, they have to return to the Games to certain death—a turn of events that breaks the hearts of their many fans.

The 75th Hunger Games makes the 74th look like a stroll through Wonderland. Director Francis Lawrence plays his cards right by accurately bringing to life the many physical and psychological horrors of the new arena—the poison fog, the monkey muttations, the Jabberjays. Add to the whole exciting mix new eye candy in the form of Finnick Odair (a perfectly-cast Sam Claflin) and Johanna Mason (Jena Malone), and you’ve got yourself a deeply enjoyable 146-minute outing.

The sardonic shifts between on-camera and off-camera behaviors, thoughts and feelings are what makes the Hunger Games movies eminently watchable. Who’s to be trusted, who is on who’s side? What will happen to Peeta and Katniss—are they really in love or is she playing him? It helps that Lawrence and Hutcherson are both such fine actors. Catching Fire introduces a darker side to the story and the characters—Katniss, Peeta, even Prim (Katniss’ little sister) have all grown up. Being in the Games in the first time changed them forever—Katniss has nightmares that can only be chased away when Peeta is holding her. Prim understudies her mother to become a physician. Katniss’ stylist Cinna (singer Lenny Kravitz in a brilliant turn) goes from being the fun fashion genius in the first movie to designer dissident in this one, when he puts Katniss in a wedding gown that burns down to a Mockingjay outfit on national broadcast.

Catching Fire leaves me with the same feelings that The Empire Strikes Back (which I watched in 1980 at the age of 13) did: a sense of tragedy, a glimmer of hope, and a deep hunger for the third instalment. I’m really looking forward to watching Mockingjay Part 1 with my teens, this time next year.