A great opportunity for dreams to be fulfilled–this was what the annual Drama Fest was to many of its participants this year. Inaugurated in 2012, the Drama Fest consists of performances put up by the Drama Ministry's actors, as well as a pool of “triple-threat” performers from its Musical Theater group. This category of performers are selected from the Backup Vocalist, Dance and Drama ministries. They had to pass several auditions in acting, singing and dance to make the cut.

A significant enhancement to this year's Drama Fest is that all performances were written by CHC's in-house scriptwriters. These individuals went through a scriptwriting course earlier this year. Their final assignment was to write a script for a ten-minute short play to be staged in the Drama Fest.

Kezia Yee, one of the aspiring playwrights, had this to say about her scriptwriting experience. “Writing is never easy, but the joy of seeing your story–that went through the fire, late nights, critique, and many, many rewrites– come alive at the end, it is indescribable.”

The Drama Fest was held in the Theater at Suntec Singapore. The facility boasts a much larger capacity as compared to last year and this increase in size brought along its own set of difficulties.  Concerned that the size of the theater would put unwanted distance between the stage and the audience, the organizers made arrangements to have the stage erected in a way that the performers could better engage the audience. In the Drama Fest program booklet, Yeo and Khoo also expressed their gratitude towards Kong Hee, senior pastor of CHC and his wife Sun Ho for introducing them to their first musical many years ago. They attributed their passion for theater and the performing arts to that very musical.

This year, the Drama Fest welcomed a new addition to its vast array of genres–short films. A total of three short films were showcased, with themes that revolved around dreams, aspirations, chances and family relationships.

Yeo and Khoo commented that short films posed a much greater challenge for the cast and crew–one such challenge was post-production work; another was the possible situations that may arise during shoots.

One such situation occurred when the crew was filming “Chasing Donkeys”. There was an on-going Malay wedding near the film set, and the sound team had to take extra measures to prevent the boom microphones from receiving excess sounds from its surroundings. 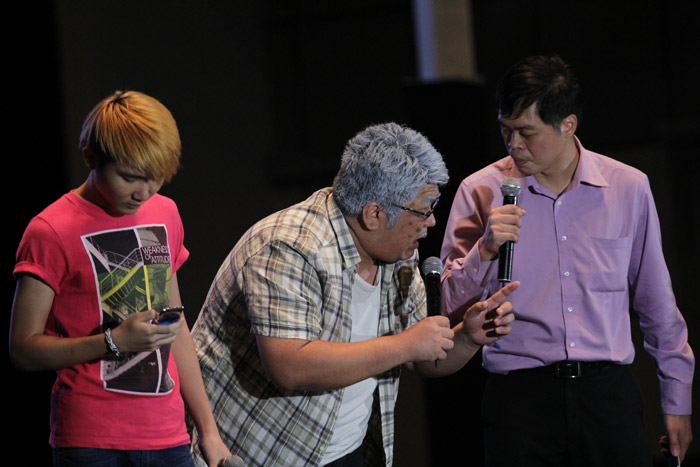 Lingual Tan, director of another short film “When We Were Young”, also added that it took great amount of teamwork from every member of the production team to make the end-product a resounding success. According to Tan, she had to work with the video editor for five days straight every night until the next morning just to fine-tune the editing and color grading.

In her collaboration with team members who shared her passion and dedication, as well as Eric Wong and his team at United Records for working tirelessly on the audio post-production,  the opportunity to direct a short film was like a dream come true for Tan. The Mass Communications graduate shared with City News that even though she had worked as a film producer previously, she had never been involved in the process of directing a film. Though she was in the industry, there was never any real opportunity for her to direct a film.

When the drama ministry heads offered her the option of directing a piece as a short film, she jumped at it. Inside her heart, she knew it had to be God, because only He knew about this secret dream.

Following her taking on the challenge, during one of her prayer times, Tan felt God assure her that if He had given her both the dream and the tools to achieve it, nothing would stop Him from helping her fulfill it. Hence, with this new-found faith, she took on the challenge and went full steam ahead. Leaning on His grace, she knew that she would accomplish this for His glory.

Tan would be submitting her film to several film festivals shortly. This dream come true has in turn sparked off a greater dream for the aspiring director.

Tan believes that every person should leave behind a legacy, and as a director, to impact the world through their films. She added that if there was anyone in particular who got impacted from this short film most, it was herself, as it helped her to reflect on her own relationship with her mother, and awakened her to the fact that she needs to cherish her more.

Through the film, she hopes to awaken audiences to memories of when they were young and learn to cherish their loved ones even more, because in her words, “no amount of time spent with our loved ones will ever be too much”.