Singer-songwriters Caroline Tjen and Jessica Irawan turn their personal battles into songs that pay tribute to faith and friendship. 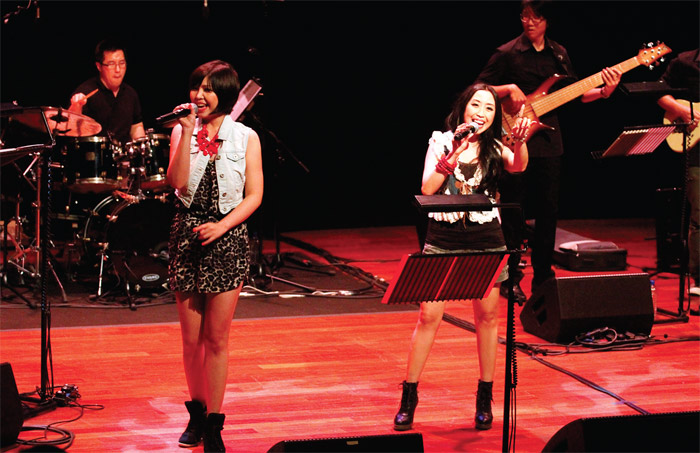 Irawan (left) and Tjen rocking out at their concert. PHOTO: Suigion Anderson Gunawan.

Listening to their energetic cover of Bruno Mars’ hit song “Treasure,” one would not have believed the duo once struggled with self-confidence and speaking English. The two-hour concert by Singapore-based Indonesian singer-songwriters Caroline Tjen and Jessica Irawan at the Esplanade recital studio on Jul. 18 was nothing short of explosive.

The concert, titled “You Glow, Gals!” was as much a tribute to sisterhood as it was a celebration of the friendship between the two girls, who first met each other at LaSalle College of the Arts in 2003. Since then, they have been inseparable, attending the same church, serving same ministry and even living under the same roof.

“Like most girls, we used to be insecure with ourselves but now we have found victory in knowing how God sees us and that we are perfect in His eyes,” said Tjen. Irawan added, “This is why we want to inspire young girls and women out there to see themselves as God sees them, and to encourage them to be courageous in pursuing their dreams, despite adversities.”

In between covers of hits including Kate Perry’s “Fireworks” and Rihanna’s “Diamonds” the two performed self-penned songs such as “Because Of Love,” a touching tribute from Tjen to her late mother.

Tjen recalled, “My mum stayed strong even while battling cancer and I felt that this was only done with lots of faith. Through the lyrics, I hope to pass on her legacy of faith.” Tjen said that for her, inspiration comes “from anybody, anytime, anywhere, but I believe the source of my inspiration is the Creator Himself, especially since most of my songs were birthed during my personal time with God.”
Irawan’s versatility is a reflection on the types of music she grew up on. “My dad exposed me to a lot of great music when I was little, from The Beatles to Deep Purple and Madonna.”

The night was testament not just to their musical talent but the chemistry between both girls. The depth of their friendship was unmistakable and most warmly felt during the performance of “Diamonds,” sang in commemoration of their 10-year friendship.

The two hour concert came to a close with two of Irawan’s self-composed songs, “Second Chance” and “Running Free”, the former written in 2003 during her lowest, darkest period when she was battling Hodgkin’s Lymphoma.

Irawan recounted that it was during that period when she discovered her passion for songwriting, as she expressed her feelings of desperation, calling out to God. It was a thoroughly moving performance, rewarded with a resounding applause at the end.

“‘You Glow, Gals!’ is our cheer dedicated to all the girls (and guys) out there with big dreams,” said Tjen. “Never let the limitations, the challenges and what people say stop you. Keep your dreams alive. Keep progressing and stay courageous.”

God Called Her To Create Garments Of Praise