Tribute To A Nonya Mother

Author Sharon Wee pays tribute to her mother’s legacy both in and out the kitchen in her cookbook, Growing Up In A Nonya Kitchen. 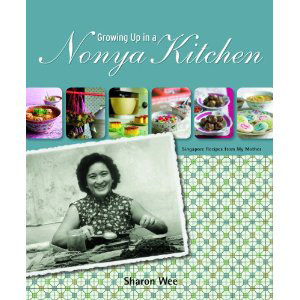 What began as one daughter’s posterity project became a beautiful tribute to her mother.

At the start of 2001, Sharon Wee, a Singaporean Peranakan pursuing her master degree in business administration in New York began a book project to put together her mother’s Nonya recipes. Not long she began, her mother fell ill and Wee flew home immediately. Tragically, three months later, her mother, Polly Wee, passed away.

The loss of her beloved mother spurred Wee on in her quest to pull together her mother’s treasured heirloom recipes. Her efforts intensified when she enlisted the help of her sisters to make sense of the cooking techniques that went into each complicated dish.

However, life caught up with her. The birth of her second child and the many commitments that came with raising a young family overseas with her American-born Chinese husband saw her book-writing project take a back seat. But in spite of the challenges of parenthood, Wee remained committed to the goal.

From converting her mother’s handwritten recipes, to learning to use different herbs, spices and condiments in her replication of those recipes, every aspect of creating this book was based upon her memory of her mother and her Baba-Nonya heritage.

What began as a collection of recipes evolved into a memoir about Wee’s mother. The author revealed that her mother “was a stereotype of her generation who was match-made and married off at 17. She also often felt tied down with having to look after six children and later on, her grandchildren.”

Despite the fact Polly Wee was not proficient in reading and writing, she “remained brave about those shortcomings as the world advanced around her,” writes Wee. Perhaps as she drew strength from within, she became a dedicated housewife who centered her life around her family and excelled in the activities that helped her in raising her family well: cooking, sewing, housekeeping.

The fruit of Wee’s decade-long project is a beautifully designed and illustrated hardcover cookbook, complete with a dust cover. Wee says there are many recipes in the book that she associates with her mother, especially those that made it to the dining table during Chinese New Year celebrations and Sunday family meals. “The ones that I cherish most of all are the ones that only she could do best,” declares Wee. No matter how hard Wee or her sisters tried – as even as they succeeded—there were still recipes that they could not fully replicate with exactly the same results, and these included kueh chang, kueh lapis spekkoek, kueh bongkong, kueh lapis and ang ku kueh. Wee realizes that these were “her mother’s handiwork”, flavored with “her special touch that made them uniquely her own.”

Wee’s biggest challenge compiling the book came from the different types of measurements her mother used to use. Precise measurements are vital to successful cooking and baking, and the task of converting measurements from katis and tahils to grams and tablespoonfuls proved tricky. There were even instances when her mother had written measurements such as “20 cents raw bread”, “1 coconut”, “1 bowl water”! It became even more challenging when these measurements were applied to cakes and kuehs where proper measurement critical—nobody wants to eat an overly-starchy kueh!

Wee’s values in life today are largely the result of learning alongside her mother in her early years. She remembers her mother as a loving, caring mother, but there were times when she was “spanked for being naughty”, and other times when she was “slow in helping out in the kitchen”. Despite growing up pains, Wee never felt pressured by her mother “to reach very ambitious goals like becoming a doctor”; instead “she would only hope for the best that we would be.”

“My mother was not a Tiger Mom,” wrote Wee, “but someone who instilled in us the values of hard work, respect for others, gratefulness.” And theirs being a Christian household, Wee remembers her mother also pressed home the importance of commitment required of a Christian.

It was only over time that Wee realized that “the positive values and decorum passed down by a Peranakan parent were intrinsically the most precious qualities to pass down and preserve for generations to come.”

Today, even though she lives in the US with her family, Wee is heartened that her daughter “absolutely delights in wearing her sarong kebaya, and loves kueh chang and even calls medicine obat.”

Growing Up In A Nonya Kitchen comprises an impressive collection of heirloom recipes interwoven with a wealth of Peranakan history and personal anecdotes drawn from Wee’s memories of her loving mother, the most striking of which is Polly Wee’s child-like faith in God and her unwavering trust in the Lord right to the end.

Growing up in a Nonya Kitchen is available at Kinokuniya at S$44.94.