The latest album from the City Harvest Church worship team is a fitting companion to a believer’s daily quiet time.

My Devotion, the latest album from the City Harvest Church worship team features eight tracks from the English services and one from the Indonesian service. As the title suggests, this collection of songs is meant to enhance a believer’s daily quiet time in prayer and worship.

The songs were chosen from more than 16 shortlisted songs that were written by various CHC songwriters. Mark Kwan, creative manager and overseer of the entire production, reveals that more and more members are composing songs, and “as members of the church, the songs we write and the sound that we produce is uniquely representative of the heartbeat of our church.”

This year, CHC members embarked on a churchwide New Testament Bible reading program in October. Those who had finished the reading plan were awarded a free copy of My Devotion. The point of this project was for members to immerse themselves in the Word of God regularly—an idea that was sparked during a brainstorming session between CHC’s co-founder, Sun Ho, and the creative team which she heads.

In the space of two months, discussions were held, songs were selected, recordings were made, and production was completed. Apart from Ho and Kwan’s creative input into the album, one of the masterminds behind this album is Eric Ng, a local songwriter-producer who has worked with major artists in the Mandarin pop industry. Ng is the brother of a CHC vocalists, and his experience in the music industry helped to greatly enhance the music arrangements. Through Ng, the team had the opportunity to work with Serene Koong, also a local artist and a vocal producer. She recorded the vocal portions of the album and spent late nights together with the team to ensure a smooth and successful production.

My Devotion was released at CHC’s Candlelight services on Dec. 17 and 18.

For Kwan, the album is more than an incentive to read the Bible. “This album means a lot to our worship team at this point in our ministry, especially considering the changes we’ve experienced in the past year. Through it all, we’ve put aside what we have been through and recognized that we are, first and foremost, priests in God’s house, called to give our time, efforts and talents to glorify the name of Christ and to build a strong atmosphere of faith and purity in His house. He is the reason for our worship, and we will not be distracted from that cause,” he says.

The team’s efforts have paid off, judging by the glowing reviews from the church members that City News spoke to.

Margaret Koh, 24, visual designer says, “My Devotion is nothing less than beautiful music with a remarkable power to inspire and serenade you with the wonders of an omnipresent God.”

Tan Tian En, 22, an undergraduate enthuses, “It is one of the best presents I have received for Christmas so far!” while student Joyce Goh, 20, says that “listening to the My Devotion CD and feeling the strong presence of God, I just fell deeper in love with my best friend [Jesus] and my church.” 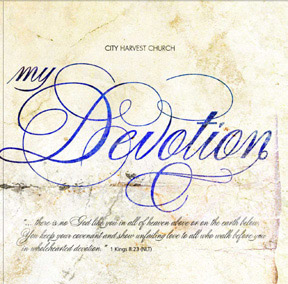 Cindy Low, 25, who is self-employed loves the second track in the album. “Sun sings the song ‘Hallelujah.’ Her voice is angelic, and there is an unspeakable peace when you listen to the song—it calms the mind. The lyrics reflect my own personal encounters with God, and remind me of how God has made a difference in my life.”

For Jacinda Loh, 32, a sales executive, “The CD tugs at my heartstrings every time I play it in the car as I travel from place to place. It reminds me that God is with me, no matter where I am.”

“It is one of my ‘must haves’ whenever I do my quiet time now,” says Darren Lim, 34, an engineer. “I love how it starts with the sound of nature—it calms me down after a tiring day at work, and allows me to truly wait on God.”

My Devotion retails at Attributes Bookstore for S$10.