The Chick The Parent The Wardrobe uses fashion to talk about the deeper issues of life.

“A full set of clothes is like a full set of values and principles. It says a lot about who you are,” says brand manager and first-time author Jaclyn Chan, 27, about the inspiration behind the quirky concept for her recently-released book, The Chick The Parent The Wardrobe. The book is aimed at helping teenage girls discover their potential by using fashion-speak, taking the reader through her own wardrobe while conveying truths about the journey into adulthood.

“I wrote this book because I felt that some concepts have not been made clear enough to us when we are teenagers. Concepts like likeability and standing up for yourself are difficult to grasp on their own. But when we link each concept to a must-have item in your closet, it becomes something any girl can relate to,” explained Chan.

For example, Chan starts the opening chapter by drawing parallels between undergarments and having a purpose in life. She writes, “Underwear (like purpose) is invisible to the naked eye. Yet it is a necessity for every girl to look and feel great. Without underwear, your assets won’t be supported and you’ll be left vulnerable. A life without purpose makes you wander around aimlessly, giving you no direction and making you feel unworthy.”

In the next chapter titled “Wearing The Pants,” she zeros in on the importance of decisiveness and standing up for oneself, being careful to differentiate between being assertive and domineering. She then thoughtfully links the two chapters together—“Decisiveness should be supported by a purpose, just as the pants one wears needs to be supported by having the right underwear.”

Packaged in a bright pink book cover reflective of Chan’s own cheery demeanor, with pages of full-color portrait shots, pretty floral backgrounds and hand-drawn sketches illustrated by the author herself, the book belies the deep life issues discussed, such as nurturing leadership skills, exploring boy-girl relationships, and so on.

Forsaking the usual, authoritative style as one speaking to her juniors, Chan writes with the easy-going tone of a gal pal sharing her experiences, but it’s not just her doing the talking. In between the pages are memos from female extraordinaires in their own field, including musician and former Electrico band member Amanda Ling, founder of retail chain 77th Street Elim Chew and ex-Zouk marketing manager-turned businesswoman Tracy Philips. 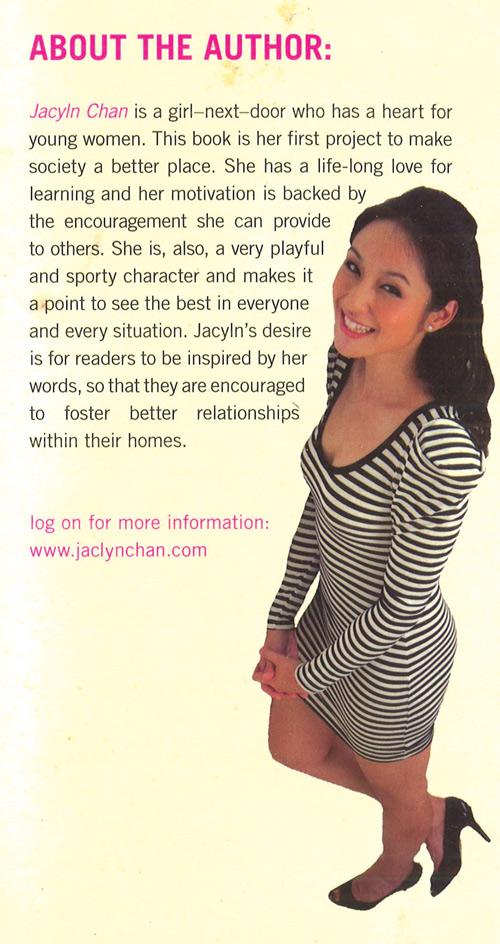 THE WARDROBE OF LIFE

Growing up without an older sister to share her problems with, Chan found herself being a listener to other people’s problems, but never could spill her own sorrows to anyone. “I had a fulfilling life, but deep down inside, I was very insecure. I felt that there was a standard that I always needed to keep up to and I grew very weary as time passed.”

Having overcome her own struggles, Chan wants to use her experience to help other teenage girls.

While holding down her day job, Chan started giving motivational talks to students at local schools, helping them gain more confidence and make the right decisions in life. She then took the momentum a step further by deciding to pen The Chick The Parent The Wardrobe, upon encouragement from her friends to create a curriculum for her talks. The new venture also gels with her firm belief in entrepreneurship and that “girls should also be able to choose their own lives.”

The book-writing project started three years ago when Chan began brainstorming and researching. “Besides writing my own experiences, I also spoke to many people and gathered stories from my friends. I wanted the book to be as personal as possible so the stories must be real,” she says.

“I thought that clothes and dressing style would be something that would attract teenage girls. In today’s fast-paced society, parents tend to forget how hard it is to be a teen and how much harder it is now for a girl to battle life’s obstacles. Hence, this book also includes letters to parents that help them better understand their child and guide her through a journey of self-discovery and personal progress,” she explains.

She plans to distribute The Chick The Parent The Wardrobe in schools in the near future. If all goes well, her next step would be to publish the exercise book version of the same title including chapters like “Jackets” and “Watches,” which are excluded in the current print.

“The decisions you make in life are like your wardrobe choices. Just like putting together an outfit, you have to sift out what works and what doesn’t in life so as to find what best represents you and allows you to shine,” said Chan.

The Chick The Parent The Wardrobe is available at S$35 from major bookstores.