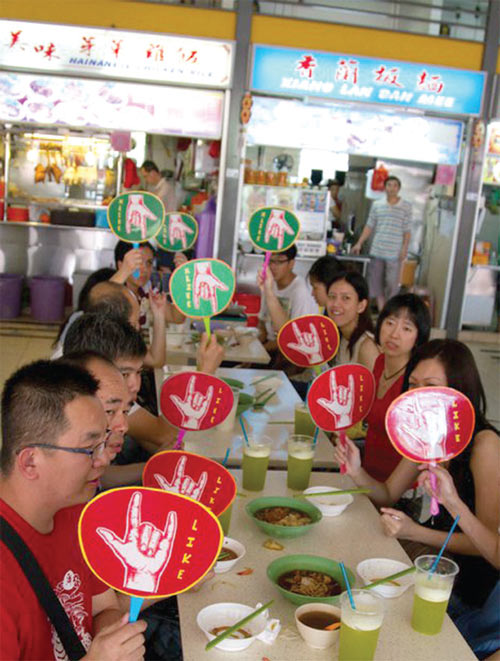 The Jolly Food Club members wave their red or green flags to rate the dishes.

This special group of “food critics” has been to famous food places such as Geylang Lorong 8 for its Beef Hor Fun, as well as the popular Tiong Bahru market for their Shark Meat Hor Fun. In May this year, the club visited the hawker center at 51, Old Airport Road to enjoy some of their well-known hawker fare.

Started by Talking Hands, City Harvest Community Services Association’s service arm for the hearing-impaired, the JFC is the initiative of CHCSA’s volunteers, Lau Ber Nard, Pearly Sim and staff member, Jonathan Goh. The club makes bi-monthly visits to various food places all throughout the island to try out and appraise renowned dishes that Singaporeans rave about. What is special about the club is that its members are made up of mostly hearing-impaired individuals.
The group tucked into roasted and steamed chicken, the popular Wee Nam Kee Pork Ribs, Hotplate Tofu and Claypot Minced Meat with Eggplant. The group was clearly satisfied with the fare served: perfectly cooked, the mouth-watering dishes were served in a timely manner.

According to Lau, a veteran volunteer with CHCSA, the club sees about eight to 10 of its members at every outing. He said, “We keep the group small so as to ensure that everyone gets to interact with one another.” After tasting the dishes, participants can choose to wave a red flag (signifying “like”) or a green flag (signifying “do not like”). The JFC organizes bi-monthly outings for its members. PHOTOS COURTESY OF THE JOLLY FOOD CLUB.

The group’s food trails are also recorded on a camcorder and put up on Facebook for members to share on their FB profiles.

Lau added that the JFC allows the hearing-impaired to explore new eating places they usually would not go to if they were on their own. In a group, Lau explained, the members are less shy and inhibited; they are emboldened to take on new experiences.

To find out more about the Jolly Food Club, log on to their blog at http://jollyfoodclub.blogspot.com.