Destiny Of A Designer Renee Leung with one of her creations. CN PHOTOS: Michael Chan.

It’s not every day an international superstar walks into your atelier and asks you to dress her for an American television reality show.

But that’s exactly what happened to Renee Leung, 37, the designer and owner behind the luxe fashion line Renee L. Collections.

Paula Abdul, who was in Singapore for Universal Studios’ Grand Opening in June this year, spotted presenter Denise Keller in a dress by Renee L., and told her how much she loved it. Keller, who is close friends with Leung and a regular client, arranged for Abdul to visit the boutique.

“I got a call literally 45 minutes before she came to the store,” recalls Leung. “Denise said, ‘Okay, she’s on her way to you now.’ I literally flew out of the house!”

Abdul and Leung hit it off immediately—“we really liked each other”—and the X Factor judge asked Leung to design outfits for her to wear on the talent competition. “I’m in the process of working on some fabulous gowns and dresses for Paula! I can’t wait to hit Hollywood to fit her!” says the designer.

Leung is no stranger to celebrities. While her typical clientele include socialites, bankers, lawyers, doctors, professionals and expatriates, she also caters to the Singaporean celebrities for local shows and events. Leung designed two outfits for Keller for the latest MasterCard “Priceless” ad campaign. She has dressed the likes of Xiang Yun, Quan Yifeng, Hong Huifang and Pan Ling Ling for the Star Awards, and Fiona Xie, Andrea Fonseka and Irene Ang for black-tie events in Singapore. Leung’s couture pieces are often seen at prestigious gatherings and balls, and a regular feature in society magazines. 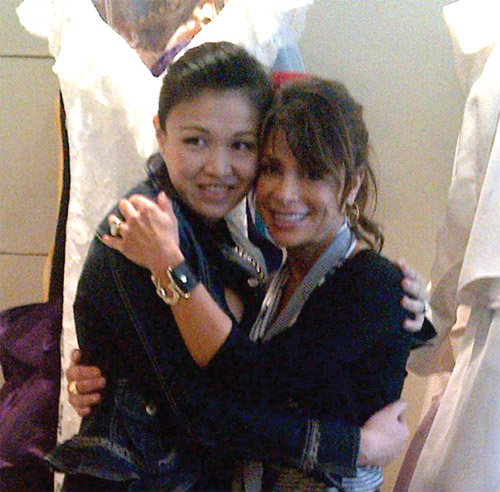 Since she was a little girl, Leung has had a penchant for great hair and clothes. “I had always harbored a passion to dress people with beautiful clothing,” she says, revealing that her earliest inspiration “came from my mom, who is a fashionista.” The late Princess Diana also influenced Leung, who was not just impressed with her fashion sense but also moved by her humanitarian work. Leung’s first “models” were her paper dolls, which she made outfits for. “They were the most that my parents could afford, because we weren’t well-to-do.”

Leung’s passion never waned; as a teenager, she studied fashion at Brookes College of Fashion in Los Angeles, California. Upon graduating she worked as a designer on renowned brands such as Ralph Lauren, Tommy Hilfiger, DKNY, Bill Blass and Calvin Klein, Guess, Activewear and Rampage. “I thoroughly enjoyed working in LA; I particularly liked the texture of the city, the people, the buildings, the working culture and the open environment—it was all very conducive for creativity.”

But while she was overseas, her mother became very ill. Leung’s elder sister was in the midst of pursuing her master’s degree in the US, so Leung decided to drop everything and come home to Singapore. “At that point, that was the best decision; I wanted to be there for my parents.” On the flight back to Singapore, as Leung was contemplating her next career move, by some divine intervention she happened to be seated next to a man who was in product development for a Taiwanese garment manufacturer. After a brief chat, he offered Leung an assignment, and that was the start of her fashion career in Asia.

In 1996, Leung was roped in to help organize her friend’s wedding. Her friend was a socialite and among her guests was the editor of Her World magazine. Upon discovering that Leung organized the entire wedding, the editor was so impressed she interviewed Leung on the spot, using paper napkins to take down her answers.

When the story emerged in Her World, Leung found herself inundated with requests to plan weddings. She quickly recognized that there was a real need in the market to provide professional, entertaining and highly creative wedding planning, not just to alleviate the stress wedding couples face during planning, but to create the ultimate and most memorable wedding occasion. She started a new business, The Wedding Butler. Within a few years, Leung had garnered media coverage from CNN, the BBC, Channel NewsAsia, Times and the Chinese newspapers. Till today, Leung counts among those who pioneered the wedding planning business in Singapore, and The Wedding Butler, which she sold off to start Renee L. Collections, remains one of the most sought after wedding planning companies in Singapore, handling both local and overseas wedding celebrations.

In 2009, Leung found her business hit by the Asian financial crisis.  At the same time, her husband John lost his job at a reputable multi-national firm. The financial strain put a lot of pressure on both of them as a couple and took a toll on their relationship. What kept them going were their two daughters, Calestin, now 6, and Nicolette, 2. In their desperation to turn things around, Leung and her husband began exploring different religious philosophies.

At that time Leung’s boutique had new neighbors, members of City Harvest Church who started a hair and nail salon called Ooosh!, which was also a social enterprise training at-risk youth. Leung “thought that this was maybe a sign from the above, and I took the leap of faith and asked Perry (the chief stylist) to bring us to City Harvest Church.”

The next weekend, when the Leungs visited CHC, not only were they touched by the message, but also by the joy and love they received from church members. Leung remembers how CHC member and Mediacorp artiste, Belinda Lee, prayed so accurately for them and their situation that they were convinced that they had found their spiritual home. Since that day, “we committed to integrate ourselves into the City Harvest family, and to have faith that things would be restored in our lives.” As their faith grew stronger in Christ, things started to look up: Leung’s business began to thrive again, and John was headhunted for a director post for a leading communications company.

“Having Jesus as the center of our lives, I feel more settled and in control of my life,” shares Leung. “I have this calm reassurance that in spite of any circumstances that may arise in business or life, I now know we can overcome all this with our faith in Christ.” Knowing Christ has also helped her become a calmer person and she finds it easier to deal with tough and demanding clients. Leung says she now has a clear vision for her life and she believes that through her business she can help many people who have troubles.

Her vision for Renee L. is to make beautiful, reasonably-priced gowns which in the future can be distributed in global fashion stores like Macy’s, Bloomingdale’s and Harrods. Leung is also very keen to expand her own outlets and build concept stores in Asia—including China—which cater to the ready-to-wear market, from office wear to cocktail dresses. “It would be a place where my customers not only shop for clothes, but also have an experience; where a stylist would have a conversation with the customer around their lifestyle and then recommend something that suits their personality.”