The two-night Festival Of Praise last weekend fulfilled its theme: “The Pursuit of His Presence.” 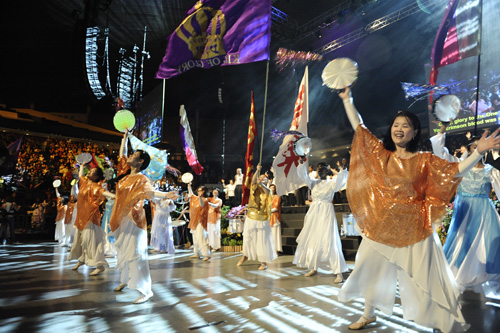 It was a sight to behold, a nod back to the early days of the Festival Of Praise. As the service opened, flag bearers began their procession around the stadium, proudly toting multi-colored flags bearing the many names of God. As singer and pastor of The City Church Andrew Yeo led in praise, dancers in gold filled the area in front of the stage and accompanied the music with tambourine-dancing.

2011 marks the silver anniversary of the Festival Of Praise; an annual inter-denominational event for Christians all around Singapore and in the region birthed from the vision of Rev. Dr. Canon James Wong to unite the body of Christ. It is held in August to coincide with Singapore’s National Day, and the Christians gathered would pray for the nation. The Festival played for two nights last week, on June 5 and 6.

Both nights, Yeo led praise, singing familiar songs like “Happy Day” along with his own compositions from his album All Things Beautiful. He was accompanied by a band comprising musicians from different churches. Yeo made way for New Life Band from New Life Church in Colorado Springs. Led by worship pastor Brad Parsley, New Life Band ushered the congregation into worship with music from their recently released album You Hold It All, including the congregation’s top pick, “Here In Your Presence.”

A video was screen featuring interviews with the pioneers of the Festival Of Praise, including Foong Daw Ching and singer-songwriter Clement Chow.

On Saturday, as verses from Psalms 149-150 were read aloud, the Strikeforce opened the evening with a compelling rendition of “Awesome God”; a musical expression of verses in Nehemiah, Psalms and Daniel composed by Rich Mullins in the 1980s.

The FOP preshow included a short worship session with Jonathan Suppaya of Jesus Lives Church singing in both English and Tamil. Suppaya hosted the second evening. To commemorate 25 years of FOP, a special video interview with Canon James Wong was screened.

On both nights, guitarist Rodrigo Rodriguez ministered to the congregation with his Spanish guitar, playing popular hymns and worship songs like “Amazing Grace” and “There is None Like You” during offering time.
The preacher for the festival was John Bevere, a renowned evangelist, bible teacher and best-selling author, who brought a powerful message, in two parts, on the empowerment of grace. Contextualizing Ephesians 3:19, Bevere challenged the congregation to live an extraordinary life of excellence, with a revelation of the power of God’s grace.

“Seventy-six percent of top box office movies are all about extraordinary people. Living such a life requires of one to exceed the common measure, of one to distinguish self from others. Jesus was able to do all he had because of God’s empowering grace!” declared Bevere. Many Christians know they are saved by grace, he said, but they have no idea what that grace can empower them to do.

Bevere linked God’s grace with extraordinary living in John 1:16: “From the fullness of his grace we have all received one blessing after another.”

His message tied back to the FOP theme, “The Pursuit of His Presence.” The more Christians seek God’s presence and grace, the more they live the extraordinary life. At the end of both services, Bevere gave a salvation altar call which saw hundreds of youth rush forward in response.

Look out for more Festival Of Praise 2011 stories in the next issue of City News.