Coming Together As One

As City Harvest Church turns 22, City News studies how the past year has been an exercise in all that the church stands for.

Entering into Suntec Singapore, the CHC family may have weathered storms but remains passionate for God and for each another. CN PHOTO: Jere Chong

This weekend, City Harvesters celebrate 22 glorious years together as a church at their premises at Suntec Singapore. Having gone through a tough season the last 15 months, the congregation comes together now to recount God’s blessings and goodness in the past two decades.

This anniversary is significant as it not only brings the CHC family together in thanksgiving; it is testament to the members’ faith and resilience, having stuck together as one and braved the storm of the past year.

This past year, individuals, cell groups and pastoral zones gathered to pray and confess God’s promises over the church. Ministry life remained vibrant as members continued to serve in their calling, committed to fulfilling the Great Commandment, Great Commission and Cultural Mandate.

It began with the church leadership and staff. A Leaders’ Appreciation service was held on December 12, 2010 to appreciate, recharge and rejuvenate those who serve the church. The fun-filled night provided relief from the intensity of the previous months. More importantly, the heart-felt appreciation expressed by CHC’s senior pastor Kong Hee and his wife, Sun Ho, left the leaders with their love tanks full, ready to take on another year. 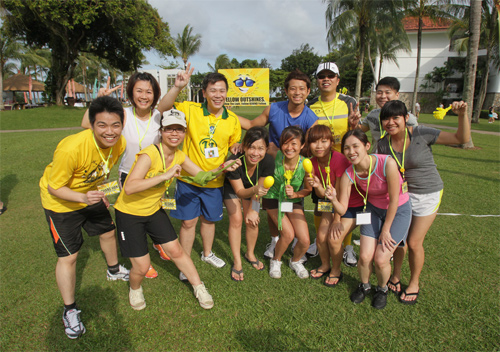 CHC staff enjoyed a time of bonding during the staff retreat in December 2010.

That same month, 170 staff members with their spouses and children embarked on a staff retreat for a time of recreation. Themed “UP” (United and Purposed) the retreat bonded staff together with a common purpose and love for each other.

As the church ushered in 2011, the year began with preparations for CHC’s move to its new premises at Suntec Singapore. It was a dream come true for the church, which had prayed and believed six years for a location in the city.

On March 19 and 20, CHC held her first service at Suntec Singapore, themed “A New Day” to declare a new chapter in the church’s history. Kong’s first message at Suntec was titled “Choosing Love,” in which he encouraged the people to restore their love and commitment to one another. At the Family Day services, Kong had children come up on stage to answer questions on the sermon.

CHC held a special Family Day weekend for the first time in its history, and entire families attended service together: parents, grandparents, children and babies. It was a special experience that bridged the gap between the different generations of families, joining all their hearts before God.

SERVING ONE AND ALL

The church’s other departments and ministries also joined in the effort to rally their people together.

The Chinese congregation of CHC held its first Family Walkathon. Over 320 members and their family members turned up at East Coast Park for the walkathon followed by fellowship, which fostered closer ties. The Chinese Church also held “Wu Da Huan Xi,” a five-week evangelistic outreach program that employed activities like learning the cha-cha, cooking classes and karaoke competitions, to form friendships and share the love of God.

Staff and volunteers for Children’s Church, JAMs Church, Dialect Church, Indonesian Service, and Filipino Service also held retreats and prayer meetings with their cell groups to bond with one another and pray for the church.

In March, over 6,000 CHC members embarked on a five-week church-wide Bible study on the book of Ezekiel conducted by Kong. Touching on topics such as the grace and the redemption of Christ, end-time prophecies, God’s judgment and mercy, CHC members were reminded to stand strong in the face of difficult times, to give grace to the weak and to be quick to forgive. Many members had their hearts healed and were renewed in their strength to live a life of faith and purity while keeping their eyes fixed on Christ.

Members were also exhorted to use their talents and gifts to serve God and His people through a church ministry. On July 23 and 24, a Ministry Weekend was held, presenting the 37 ministries of the church. Kong’s message at service drew from 1 Peter 4:10, “As each one has received a gift, minister it to one another, as good stewards of the manifold grace of God”. Encouraged, hundreds of eager members signed up for a ministry that weekend. The youth camps engaged the youth of CHC in many exciting activities.

Touching the lives of the youth generation has always been at the core of CHC. To strengthen the spiritual life of the youth, many youth camps were held during the June holidays this year. Many youth who attended these camps, believers and non-believers, found their lives changed because of their personal encounters with God during the sessions. Kong visited many of the youth camps and gave a special word of encouragement to the campers, lay hands on them and fellowshiped wth them.

The grand finale was Emerge: the popular youth movement returned with a renewed vision and purpose, and this time, the youth ran the whole conference, with Kong preaching. It was exciting to watch God raising up a new generation of youth who love Him and want to make a difference.

At Dialect Church, volunteers and workers became a blessing to the elderly community in Singapore. During Chinese New Year, they organized a mass lo hei session for 700 elderly folk. DC also held a successful Family Day carnival in May, and most recently, an exciting Oldies Concert featuring music the senior citizens enjoyed. (Clockwise from top left) The Children’s Church worship team at the Go4th Conference; JAMs members in worship during a JAMs service; the 3PM Band will be releasing their second album soon; the Dialect Church is a vibrant growing congregation. CN FILE PHOTOS.

Two other ministries in CHC demonstrated their love for God in these ways. For the Filipino service members who found God and a home away from home in CHC, a group of 11 people accompanied CHC pastor, Jimmy Sng, back to their homeland for a mission trip. The aim was to bless their fellow countrymen just as they have been blessed in Singapore all this while. In this trip alone, the team held 24 sessions in seven days and impacted hundreds of people through prayer and preaching.

Members of the Indonesian Church demonstrated God’s love through music. Having released a praise and worship album in 2010, the CHC Indonesian band 3PM recently completed their second album entitled Holding On. Even though some of the band members have returned to Indonesia, they continued to help in the production of the album, displaying a strong spirit of unity.

At the same time, the JAMs Church and Children’s Church did their part to be a blessing to those around them. The former organized a Love Connection event which provided an avenue for the JAMs members and their family members to spend some quality time together in church through heartwarming activities. Held at CHC’s Jurong church premises, this event bridged the gap between family members, many of whom would have never stepped into a church if not for this gathering.

At the Children’s Church, a team of teachers went beyond their regular call of duty of serving children, to serving children’s church workers in Asian countries. These trips provided an opportunity for the teachers to share their ministry experiences to hundreds of other workers who were keen to learn from the CHC team.

Eileen Toh, pastor of the Children’s Church, said, “Despite what was happening in CHC, we wanted to go out and bless other churches. Through these trips, we managed to minister to over 2,000 delegates.”

It was as if a fever had caught: an endless stream of individuals, cell groups and zones got busy spreading the love of God to the less fortunate.
Last Christmas, 79 members from the zone under district pastor Wu Yuzhuang organized a carnival at Chen Su Lan Methodist Children’s Home, bringing a day of fun and joy to the children, many of whom come from dysfunctional homes.

Another cell group, under executive pastor Derek Dunn, took part in a project to make over four homes, bringing cheer and joy to neglected elderly folk.

A cell group under John Lam renovated their fellow member’s home when they discovered the state she and her children lived in. Fifty individuals rapidly pooled together S$11,000 to paint and furnish the flat. They even paid for the family to stay at the YWCA while their flat was being fixed up.

The youth were equally charitable. Members of a cell group under zone pastor Goh Yock Kiang cleaned up the home of their friend upon discovering its dismal state. They replaced bedding and cleaned up the house, and even helped the family to sell off used items and appliances for some extra cash.

Every part in the CHC “body” is equally important. Standing strong together and continuing to serve God faithfully and willingly is proof that a church that prays and serves together, stays together. The unity in CHC is evident, despite the challenges it faces.

Through it all, God’s promises remain true as He is watching over His church. And just as He has seen this church through since its inception, He will continue to watch over her and work everything together for the good of those who love Him.

What better way to emphasize this than to remember the theme verse for CHC’s 22nd anniversary in Jude 2, “Relax, everything’s going to be all right; rest, everything’s coming together; open your hearts, love is on the way!”