Dyslexia is a learning disorder that can hamper a person’s development, but Lucas Chia did not let it stop him from succeeding in life. 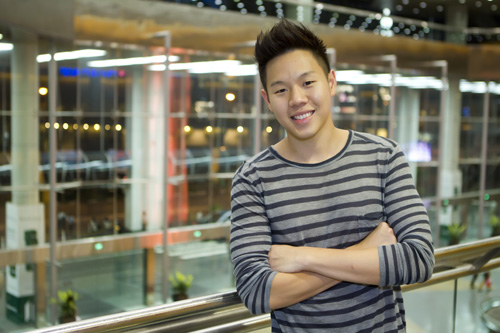 Lucas Chia has beaten the odds to become a person of many achievements. CN PHOTO: Michael Chan.

It came as a shock to Lucas Chia when, at 13, he failed his English exam in Secondary 1.

“I had never failed English before in my life, and it was especially surprising for me because I come from an English-speaking family,” says Chia, now 23. “It seemed a little strange to my teachers and my mother, so they decided that I should take an educational psychology test to see what was going on.”

It turned out that Chia had a Developmental Reading Disorder, or dyslexia.

Dyslexia is an impairment in the brain’s ability to translate written images received from a person’s eyes into meaningful language. It is the most common learning disability in children.

“I encountered numerous difficulties in the areas of sequential memory and spelling,” he describes. “This in turn affected my ability to handle English comprehension questions and cloze passages.”

According to the Dyslexia Association of Singapore, “a person with DRD may have trouble rhyming and separating sounds that make up spoken words… Because people with DRD have difficulty connecting the sounds of language to the letters of words, they may have difficulty understanding sentences.”

What dyslexics suffer most from are self-esteem issues.

“I went through a long period of struggling with insecurity and self-consciousness after I discovered I had this condition,” Chia admits. “I no longer felt comfortable with my spelling and with reading aloud; I had no confidence to believe I could ever do well in school.”

He recalls, “Even during cell group meetings when each person had to read a verse out, I would count the number of persons in line until it was my turn, so I could read through my verse first and not fumble when my turn came.”

Chia’s mother enrolled him with the DAS, having heard from her friends that the association could help her son to cope with dyslexia. The DAS program helps to match a person’s chronological age with their literacy abilities before they are allowed to graduate.

DAS was where Chia met Mr. Roslan, the therapist who helped him overcome his problem. “He started by letting me know there’s nothing wrong with being dyslexic, and that began the process of rebuilding back my confidence,” Chia recounts. “Those three years with DAS helped me tremendously. Because of Mr. Roslan’s dedicated guidance and support, I managed to do sufficiently well in my GCE O-levels, scoring a B3 for English and a total of 18 under the L1R4. I was never great academically, so to me that was a huge miracle!”

Since his challenge-filled school days, Chia has gone on to live his life with success. He played the lead in the OKTO TV series, The Band, and City Harvest Church members will recognize him as a familiar face in church dramas.

“My biggest opportunity came last year when I was selected to be one of the frontline singers for the inaugural Youth Olympic Games’ opening and closing ceremonies,” says Chia. The ceremonies were beamed live to countries across the globe.

“Having the chance to perform on the world stage was something I never imagined I would do—definitely not when I was struggling with dyslexia at 13.”

Most recently, Chia was one of three young people who received the inaugural Young Achiever’s Award from the DAS. The award, which honors dyslexic youth for their inspiring achievements in spite of their disorder, was awarded in June this year at the annual DAS student graduation ceremony held at Fusionopolis.

For dyslexics, reading difficulties may persist for life, but with proper treatment at institutions like DAS, they can learn to cope in a healthy, safe environment.

“Kids face enough trouble in school dealing with school work and friends knowing they have a problem, so coming home to a loving and supportive environment is the best thing any dyslexic can hope for,” relates Chia. “My mum is amazing: she single-handedly raised my brother and I, and constantly showered me with love and support through all my difficult years dealing with dyslexia.”

Chia thanks DAS and Mr. Roslan “for their relentless belief in me and in my ability to succeed; I always thought dyslexia was a disability. Little did I know that it would be through dyslexia that I found myself and my true talents and abilities. That’s a miracle that only God can do; I really want to give thanks to Him.”

Chia is but one of many successful dyslexics: even Albert Einstein and Singapore’s Minister Mentor Lee Kuan Yew were diagnosed with dyslexia.

“I believe every one of us was created for greatness,” says Chia. “[If you are dyslexic], don’t let this condition stop you from pursuing your dreams. Believe in yourself—together with God, you can attain anything you put your heart to.”

What is dyslexia?
Dyslexia occurs when there is a problem in areas of the brain that help interpret language. The disorder does not interfere with one’s ability to think or to understand complex ideas. Most people with dyslexia have normal intelligence, and many have above-average intelligence. Dyslexia often runs in families. Dyslexia is a lifelong condition. Dyslexic kids grow into dyslexic adults. But if they get help early, they can develop methods to deal with their reading difficulties.

What are the symptoms?
In general, symptoms of dyslexia may include difficulty in determining the meaning of sentences, difficulty in learning to recognize written words, and difficulty in rhyming. Dyslexia may occur in combination with writing or math learning problems as well.

How do I know if my child has dyslexia?
Dyslexia is normally diagnosed through an assessment by an educational or specialist psychologist. A psychological assessment provides an objective measurement of your child’s abilities in a variety of areas. If your child is dyslexic, he or she learns in a different way. Specialist teaching is necessary to learn to overcome dyslexia and cope in mainstream school.

Facts from Dyslexia Association of Singapore. For more information log on to http://www.das.org.sg