Walking by faith, not by sight—that’s what members under Chew Eng Han did at the recent BBG camp. The BBG campers, all refreshed and fired up, with CHC’s senior pastor Kong Hee.

It was a sight to behold: over 100 people at Hard Rock Hotel, Penang, with colored bandanas over their eyes, shuffling to the right and to the left, attempting to sit down without falling over. Printed on their bandanas was the theme for the event: “Walking by faith, not by sight.”

The Business Breakthrough Group camp has been an annual (or bi-annual) event nearly every year since 2003. BBG is one of the business groups in City Harvest Church. Attendees of the camp were members under the pastoral care of Chew Eng Han, and some of their friends and family members.

The venue this year was Hard Rock Hotel in Penang—its beautiful beach and enticing swimming pools beckoned the campers constantly. But the members—mostly busy business people and executives back home in Singapore—were more eager to spend quality time worshiping God and digging deep into His Word.

Chew preached for four sessions on four aspects of faith: the logic, pillars, stories and spirit of faith. He made a case for faith, without which it is impossible to please God. The pillars of faith believers need are God’s love, which bring strength; His Word, which brings vision, and His presence, which brings peace.  After sharing examples from the Bible of people whose faith impressed Jesus, Chew ended with a lesson on the spirit of faith—a child-like belief that God loves us and will keep His promises, and that we must accompany our faith with works.

The organizing committee had colored bandanas printed for all the campers which were used in “faith exercises.” One exercise—demonstrated with much hilarity by couple Larry and Nanz Komo—required the attendees to blindfold themselves and take a step (of faith) to the right or left, and sit down. 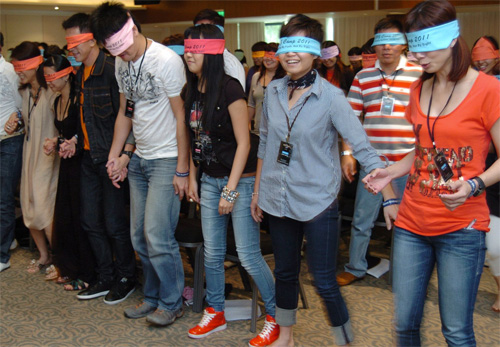 The second exercise required everyone be blindfolded, and to focus on what God was saying, to attain a rhema word from the Lord. “Remember, whenever you are discouraged by what you see, take this out and put it on, and walk by faith,” said Chew, waving a bandana.

Attendees were further buoyed by the encouraging testimonies. Wendy Ng shared how she had been hit by a lorry and miraculously survived, by the mercy of God. But the accident left her with a chronic stiff shoulder and she could not circle her arm. However, after being prayed for at the camp, Ng felt her shoulder heal, and demonstrated to the room how God had given her back the full use of her arm.

The most highly-anticipated event at the camp was the session by Kong Hee, senior pastor of CHC. Kong shared candidly about the challenges he faced in the past year, and how the Holy Spirit forewarned him of difficult times as well as encouraged him about the future. He carried with him such a great presence of God that every believer dashed to the front of the room when he gave an altar call, each one hungry for a fresh touch from the Holy Spirit.

“For me the highlight was the inspirational and comforting message by Pastor Kong on the Holy Spirit, that He not only gives you visions and dreams but also warns you and looks out for your interest in tough times,” said marketing manager Jamshed Wadia, 37, who nearly did not attend the camp. “My decision to come was a last minute one, but it was so completely worth adjusting my work schedule for!”

The final day of the camp was spent building bonds among the members. Eight teams competed against each other in a series of races and games, culminating in a “BBG Rock Star” segment where each group unleashed their best rocker talents.

The finale of the camp was a barbecue dinner, with entertainment provided by various cell groups, including The Snooze, a video spoof of The Noose, which was by all accounts funnier than the actual TV show.

The evening closed with a birthday celebration and appreciation for Chew and his wife Janet, a fitting end to an uplifting three days.

Upon returning from camp, Dee Teo, 36, a marketing manager put into practice what she learned. “During one of the sessions at BBG camp, I was moved by the Holy Spirit to forgive and extend grace to one of my staff members, whom I thought was totally undeserving. My heart was humbled, and I obeyed God. Now, we have a totally different relationship: she was touched by the second chance given, and has been inspired to perform better.”

“The camp was good for us because it brought us closer to each other and also closer to God,” said Chew, 51, an entrepreneur. “Also, we have been reminded to focus on the theme of the camp, ‘Walking by faith, not by sight’, which is absolutely vital for all of us in the marketplace.”