A Shave For Good

A 13-year-old cancer survivor kicks-off the first event for Hair For Hope 2011. 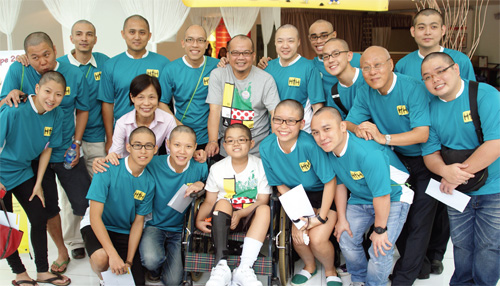 Jarenn (in white) and Zaric Foo (in gray) together with the shavees of the first Hair For Hope 2011 satellite event. PHOTO COURTESY OF CHILDREN'S CANCER FOUNDATION

Going bald from chemotherapy is a heartbreaking experience for many cancer patients. In a show of support for them, 22 individuals volunteered to have their hair shaved off at the first Hair For Hope 2011 satellite event on June 10. The main Hair For Hope 2011 event will be staged at VivoCity’s Central Court on July 23 and 24.

Among them was 13-year-old cancer survivor, Jarenn Foo. Having personally gone through a painful experience, Jarenn was more than willing to lose his newly-grown hair to “show love and encourage his friends who are battling cancer.” His effort raised more than S$4,000 for the Children’s Cancer Foundation, surpassing his target of S$3,500.

Diagnosed with Acute Lymphoblastic Leukemia in August 2009, the then 12-year-old Jarenn went through treatment and was bald for 15 months. To keep him company, his father Zaric Foo, 46, shaved off all his hair as well.

In March this year, Jarenn resumed his secondary school education. Prior to his return to school, social workers from CCF provided teachers and classmates with an understanding of his condition and needs, and prepared them mentally to integrate Jarenn into their class.

Having overcome his battle with cancer, Jarenn now wants to give back to the community by showing support to those still undergoing treatment and fighting the disease. To these cancer patients, Jarenn’s advise is: “Don’t ask why you have cancer, because there may never be an answer. Play hard! Eat well! Sleep well! Live life as normally as possible.”

Organized by CCF and into its ninth year, HFH is an annual community outreach event to raise funds for CCF and increase awareness of childhood cancer. Jean Yip Group has offered their services for all HFH events over a three-month period from June to August. The target for this year’s HFH is 3,000 shavees.

The funds raised will contribute to the overall annual S$3.5 million needed to continue providing critical programs and services to assist children with cancer and their families to cope with needs at different stages of the illness.

While Jarenn shaved because of his personal experience, Isabel Phua, a 20-year-old student from Nanyang Technological University and a first-time shavee, participated in the movement in honor of her mother who passed away from cancer.

“My mom passed away six years ago, and this year, I felt a strong determination to take part in the movement. That’s the reason why I jumped at the first chance and came for the first satellite event instead of waiting for the main event at VivoCity next month.” A total of 24 satellite HFH events have been planned this year.

To show your support by shaving your hair or donating, visit hairforhope.org.sg from now till June 24.