Every Mom A Beauty

To celebrate all mothers, COPE organized its biggest Mother’s Day Pageant yet.

Pretty maidens all in a row: pageant contestants, judges and volunteers.

COPE, or Community Outreach Programme for the Elderly has been working closely with the South East Community Development Council since 1999, making a difference to various housing estates in the Mountbatten and Potong Pasir constituencies, reaching out to about 1,000 senior citizens.

This year, COPE beneficiaries will get to enjoy elderly care services at a center located near the Mountbatten Constituency. Dubbed the House of Joy, this center will incorporate facilities such as multi-purpose rooms for meeting and training purposes, an IT learning hub, a recreational and leisure area for the elderly to socialize and interact, and even a snack bar for the elderly.

Luncheons, field trips and camps are all part of a repertoire of creative outreach ideas aimed at befriending the elderly and adding value to their lives. 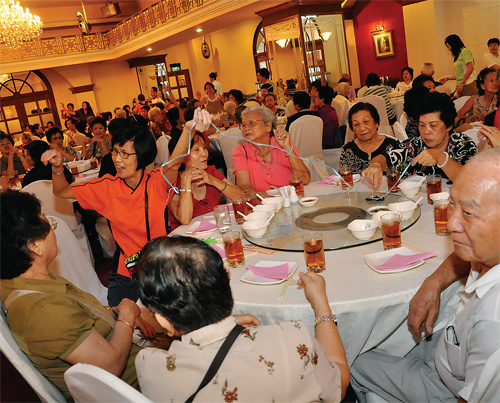 Teams had to string a list of items onto raffia.

Two hours before the event, staff and volunteers arrived at the restaurant to prepare for the event. Contestants for the pageant also turned up nice and early to prep for their time in the limelight. Just past 11 in the morning, chartered buses started arriving and volunteers ushered attendees to their seats. To warm the crowd up, games were soon underway. The elderly audience took part in a contest where they had to locate a set of items—a bunch of keys, a ring, a bottle of medicated ointment, among other things—and string them onto a piece of raffia. The first team to complete their list won.

Speaking in both English and Mandarin, the emcees, Allen Yu and Yvonne Cheong, were a hit with the elderly as they engaged in lively banter and interacted with the audience.

The last of these was determined by audience votes. The ladies were judged by appearance (beauty, presence, and fashion sense), communication skills (eloquence and confidence), personality (self-confidence and self-presentation) as well as their performance during the question-and-answer segment. 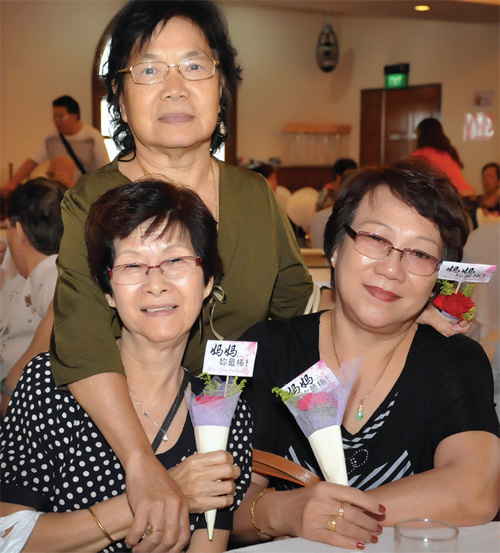 The celebration was held in honor of all mothers. CN PHOTO: Jason Lee

Escorted by six dashing young men, the 12 contestants, dressed in casual wear, went up the stage to introduce themselves. They were met with cheers and applause from members of the floor who were armed with clappers and whistles.

As the contestants were escorted off the stage and the next round of dishes was served, the crowd was treated to a guitar-accompanied rendition of Elvis Presley’s “Only You” and Sam Hui’s “Ban Jin Ba Liang.”

The contestants returned for the second round, parading in their evening gowns before entering into the Q&A segment of the pageant. After that, as the singers performed classics like “Country Road (Take Me Home)” and the popular “Wo Wen Tian” from the Taiwanese TV serial, Love, the audience cast their vote for the winner of the Mrs. Personality title. Prizes of the pageant were sponsored by Angel Face.

The winners were announced and escorted to the stage to the tune of Survivor’s “Eye Of The Tiger.” The title of Mrs. Photogenic went to 72-year-old Alice Wee, and Mrs. Best Dressed was 74-year-old Tan Geck En, who spends her free time sewing, so her win came as no surprise.

Speaking in Mandarin, Tan said, “It is my first time entering a pageant and I didn’t expect to win.” The former kindergarten teacher/production line leader/hawker raised three children with her husband, a taxi driver.

Tan revealed that she went through a tough time at one point in her life, being the main breadwinner. She had to financially support her own household and the entire maternal side of her family.

Her lifetime of sacrifices and hard work as a mother throughout all these years has definitely paid off—one of her sons is a Prime Minister’s Book Prize winner and is studying chemistry in the National University of Singapore on a scholarship. Her daughter is a literature teacher at Nanyang Junior College. Tan is now enjoying her golden years taking care of her grandchildren.

Huang also has reasons to rejoice as a mother—her son gets married this month. She has seen her efforts as a mother bear fruit in her daughter as well, who is now a department head in a primary school. Together with her husband, a civil servant, she brought up her two children while working as an administrative clerk.

COPE’s luncheon was a showcase of the best of motherhood, and a fun-filled celebration of lives that have been and continue to be richly lived.