The Formulas For Success

At a recent office devotion session by The Marketplace, business leaders learned the importance of putting God in the equation. Following the inaugural office devotion for business leaders, members of The Marketplace convened once again at the office of Bok Seng Group for their second meeting.

Traveling to the heart of an industrial estate, 17 business leaders came together to hear and receive the Word on May 13 at the Bok Seng Logistics Hub in Tuas. Following a short time of worship, the chairman of The Marketplace Goh Yock Kiang cut straight to the chase and showed how Christianity and running a business can be married: he handed out a set of notes entitled “Indicators For Company Performance.”

The measuring of Key Performance Indicators or KPIs is key to business owners who know the importance of constantly feeling the pulse of their business in order to accurately understand and gauge its vitality and strength. While most people would gauge the health of a company purely by its profit margin, Goh argued that there are three types of performance which need to be monitored: Intellectual Performance, Emotional Performance and Spiritual Performance.

Einstein’s enduring equation of E = mc2 is used as a mnemonic device to elaborate on the criterion for assessing each type of performance. Goh shared how a company which performs well intellectually has its focus on numbers and can be called a “good to great” company. In this instance, “E” stands for constant earning, “M” stands for quality of market domination while the twin “C”s stand for cash and cost respectively. For such companies, they acquire certain characteristics and reputation after a certain period of time. As business owners, the question to ask is if people would miss their companies if they are gone.

Next, Goh applied the formula to emotional performance: “M” here stands for morality and “C” stands for culture. Morality encompasses the relationship one’s business has with the government and the community at large, as well as work ethics. Culture refers to leadership characteristics in the organization. Companies that do well both intellectually and emotionally are “built to last” companies; they are characterized by their enduring nature and focus on building a reputation around their business.

Goh stressed that more than just good corporate governance, the ultimate aim is to build a company with “God corporate governance” where God is Lord over the company. Here, “M” stands for Man or Management, while the twin “C”s stand for the Creator and creation. He summarized their interrelationship as the management making effort to focus on the Creator, acknowledging the Lordship of Christ while bringing goods and services to benefit creation. Such companies would be known as “built to bless” companies, with belief as a key cornerstone.

Host, Dave Ng shared the testimony of his conversion—a process which spanned 16 years, beginning with the search for answers after his grandmother passed away. He went for an Alpha Course and was moved by the care and support from Christian friends who saw him through his family’s crisis during his wife’s miscarriage. He later attended City Harvest Church just to see how a big church was run. Finally, he was won over, received Christ and became rooted in the church itself. 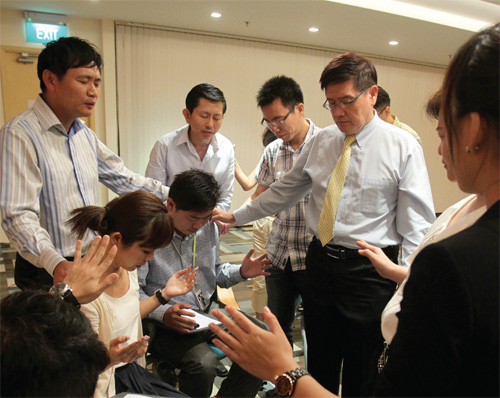 Two weeks later, The Marketplace met again for devotion at Force 21, a regional supplier of security, defence and rescue gear. This time, Goh taught on the need for mindset renewal in a world that is constantly changing. The business leaders were blessed by his sermon which touched on the three effects of the outpouring of the Holy Spirit, namely dreams and visions, boldness, and creativity and curiosity.

Hosts Daniel and Dorin Cheah shared about CWT Group acquiring a 70 percent stake in their business, Force 21. Selling one’s business is something many business owners feel sentimental about, but the Cheahs determined that the business belonged to God and they were willing to let it go should God decide to expand it in such a manner.

Business leaders can look forward to more office devotions. These sessions encourage the growth of their businesses and also their development as Christians in the marketplace. The testimonies serve as reminders too about the faithfulness of God’s word, blessing and abundance when Christ is the CEO of one’s company.

The next Marketplace devotion will be held on July 15, from 10 a.m. to 12 p.m. at Kingsland Development Private Limited, 15 Kwong Min Road. All are welcome. For more information, visit http://themarketplace.com.sg.