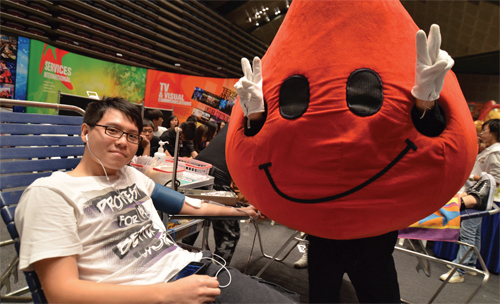 On Saturday, May 21, the City Harvest Community Services Association held its second blood donation drive of the year at Suntec Singapore. The drive commenced at 10 a.m. at Hall 603. In typical fashion, there was a theme—this time, it was Ice Cream Fiesta.

Dressed in white T-shirts and jeans, the CHCSA volunteers were on site with a smile and a helping hand. After registering themselves, the blood donors filled up a medical form before proceeding to take a simple blood test to ensure that they were fit enough to donate blood; some were rejected because their blood pressure was too low, some, because their veins were too small, and others, because of their iron measurements were below 12.5.

Foster Chua, 22, a School Of Theology student and fourth-time donor, said that he donates blood because it is the one thing he can give away to save lives without “incurring any losses.” He was also impressed by the service standards of the CHCSA volunteers as well as that of the nurses, who were able to deftly distract the donors’ attention from the needle by engaging them in light-hearted conversation throughout the blood transfusion process.

Clair Yang Fei, 21, a Management Development Institute of Singapore student from China was there to make her first ever blood donation. She was accompanied by two of her friends from City Harvest Church as well as another classmate.

For 18-year-old Erika from Indonesia, her first attempt at donating blood fell through because her vena was not big enough. She was thus advised to exercise more in order to try again in a few months’ time. Still, it was not a wasted trip. Thanks to ice-cream partially sponsored by Unilever, she was able to soak in the fun atmosphere while indulging in a sweet treat.

A mascot in the shape of a blood droplet went around snapping Polaroid photos with blood donors as they were undergoing the transfusions. The mementos were given free to all participants as a token of appreciation for their selfless contribution, and was very well-received by all.

By the end of the drive, the targeted turnout of 200 donors was exceeded, with the final tally being 304 registrations. CHCSA staff Irene Ho said, “A pint of blood can save three lives. Donating blood allows us to look beyond our own needs  to that of others.”

The next blood donation drive will be held on June 12 at *SCAPE, Level 4.