Singapore holds its 20th AIDS Candlelight Memorial to remember those who had lost their lives to the disease. In memory of loved ones lost.

Held annually every third Sunday in May all over the world, the Singapore AIDS Candlelight Memorial 2011 was held at 7 p.m. on May 15 at *SCAPE’s sky terrace. Jointly organized by Action For AIDS, Tan Tock Seng Hospital, Singapore General Hospital and National University Hospital, Singapore joined more than 100 countries in holding the candlelight memorial, now in its 20th year.

The event began with the screening of a video paying tribute to those who had lost their lives to AIDS. Family members, medical staff, and volunteers spoke of the strength and spirit of the deceased. Following the tribute video was an opening item by a representative of the Women Police Pipes and Drums.

Professor Roy Chan, president of AFA gave a welcome speech, sharing that there were 440 newly detected HIV patients in Singapore over the last year. However, the overall number of people with HIV has decreased from that of 2009. He reviewed the efforts taken to combat AIDS, giving prevention a B+ rating, treatment a C rating and people interested in change a C rating. Much more can be done for the community of AIDS patients and the event, he said, was to renew interest, passion and bring hope and love to the patients, to renew the promise to fight AIDS and its effects together, as a community. 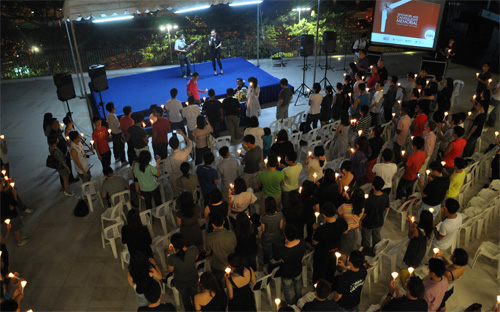 A sign to AIDS sufferers that they are not alone in this fight. CN PHOTOS: Lim Chai Seng

Following his speech was a video screening of an AIDS patient that highlighted the social stigma faced by people suffering from AIDS. Initially, he too struggled to come to terms with his illness, but started opening up to social workers two years after being diagnosed. He shared of how he chose to embrace gratitude for the chance to live instead of wallowing in self-pity. His final encouragement to Aids patients was to speak up to help others and not to give up on life—to “be strong and of good courage.”

The Singapore Men’s Chorus performed a melodious rendition of “Seasons Of Love,” a song that was moving and profound, speaking of life being measured in love. By the time AFA volunteer, Jiayi, came up to present the story of another AIDS patient who took her own life, there was hardly a dry eye in the open spaces of the sky terrace. Jiayi spoke of watching her friend, Ethel, struggle with AIDS for four years and the lifelong lessons she has learned from Ethel. “It doesn’t matter how many times you fall—what matters is that you keep picking yourself up whenever you fall.” Ethel was the reason she became a volunteer.

The third and final story of another AIDS patient, Amis, was presented by AFA volunteer, William, on behalf of his friend. He shared how Amis’ smile and optimism brought much joy and comfort to his loved ones and volunteers, in spite of his illness. He said, “Amis never gave himself up to fate and fought to the end.” Though Amis eventually lost his life to AIDS, he taught everyone around him to “recall happy moments and do it with a smile, Amis-style.”

Nanyang Academy of Fine Arts graduate and freelance performer, Gildon Choo, then played an emotional and moving piece on the pipa, after which various representatives of the institutions that organized the event proceeded to light the big candle, followed by the volunteers and the rest of the crowd lighting their own candles to the tune of “Pass It On.”

Through the event, the organizers hope to raise awareness of the plight of those who suffer from AIDS and to send a message to them to let them know that they are not forgotten or left to fight AIDS alone. The candlelight memorial also served as a form of closure for volunteers who never got a chance to say farewell to their deceased patients. Truly, it was a time of remembrance and reflection that left a poignant mark on those who were present.