An Easter To Remember 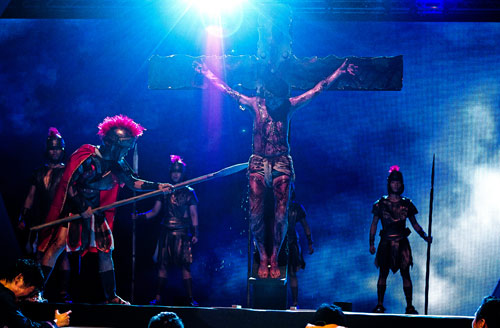 The Centurion, was a visual spectacle of the suffering and victory of Christ on the cross.

Easter is a time for Christians all over the world to commemorate the crucifixion and celebrate the resurrection of Jesus Christ. Christ was nailed to the cross at Calvary on Good Friday. He died, but defeated death to resurrect three days later on Easter Sunday—this forms the very basis of the Christian faith.

That is why, every Easter weekend, starting on Good Friday, City Harvest Church commemorates the work of the cross by reprising the road to Calvary, the crucifixion and the resurrection of Jesus Christ in a Passion play—the Easter drama production.

THE WORK OF THE CROSS

To remain relevant to the times and to offer a fresh perspective of Jesus’ work on the cross each time, CHC’s Easter drama productions have taken on many different angles and storylines the past 22 years. In 2008, the drama ministry staged iMing, in which a modern day inventor creates a time machine that brings him back, face-to-face with Christ. Last year’s Life-Book was a present-day re-telling of the Easter story, with Jesus and His disciples in suits, turning water into chardonnay, being betrayed through an Internet smear campaign.

Every year the story would be told using different angles, plots, sets and actors; but one thing never changes­—no Easter drama would be complete without the proclamation of the suffering and victory of Jesus Christ on the cross.

Sun Ho, co-founder of CHC and the person who oversees the creative departments in the church, explains, “Easter is all about the price Jesus paid for us … how He broke the power of sin and death. The resurrection would not be possible without first, the crucifixion—our eternal salvation wouldn’t be assured without His sacrifice. And for that, I am forever grateful.”

The heart of the Easter drama every year is the Via Dolorosa—the “way of suffering” that Jesus walked, carrying His cross—and the crucifixion. The drama ministry actors depict the torture Jesus went through as they walk through the congregation, whipping and mocking Him. The road to Calvary.

“This is probably the ninth year I’ve watched them play out the scene on the road to Calvary, and it still never fails to move me to tears,” says churchgoer, Lisa Chong, 28, a finance executive. “It is always the best part of the drama.”

This year, the challenge for the drama ministry was to portray the sacrifice and ultimate victory of Christ in a manner that was brand new to the congregation. Scenes of Jesus ministering the Word of God and performing miracles of healing and deliverance were woven into the story of the betrayal of one Roman soldier by another. Rescued by Jesus, the hero finds himself the one who, in the Bible, was ordered to pierce Jesus’ side to ascertain His death. For all that gripping drama, the story stayed true to the central theme of the Gospels—the love and forgiveness of Christ. The congregation in worship at the Easter services.

By the blood of Jesus Christ that was shed on the Cross, salvation has come to all mankind. For the church’s staff, members and ministry volunteers, no effort was spared in making the environment conducive for friends and visitors to experience the love of God.

The ushers wore crimson red tops as they went about their roles of directing guests and visitors to available seats; the Visitors’ Lounge was expanded to accommodate the crowd; the greeters and Aircrew Fellowship members turned up in full force to serve complimentary beverages—sponsored by Coffee Factories—to the visitors and new friends who came; and more than 800 free CDs were given out.

CHC member and owner of Coffee Factories, Denny Leonardo, 35, was happy to play a part in this year’s Easter weekend. “When the opportunity was presented to me to sponsor coffee for the Visitors’ Lounge, I jumped at the chance to do so. Serving a cup of coffee to a first-time visitor in church is our way of saying, ‘We’re glad that you’ve taken the time to join us in our Easter celebration; we’d like to get to know you better.’” 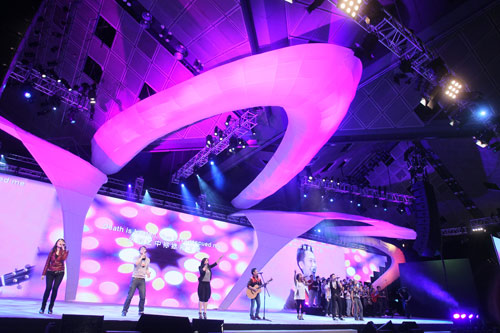 The worship team led in songs of praise and celebration of Christ the risen King.

At the start of the services, the worship team took to the stage with songs such as “Happy Day” and “Hallelujah, Jesus Is Alive” to proclaim and celebrate the resurrection power of Christ. For worship leader Teo Poh Heng, 42, Easter weekend carries with it a special atmosphere. He explained, “Every weekend, we celebrate what Jesus Christ has done for us; but on Easter, the jubilation heightens. That is why the songs we sing reflect the victory that Christ has won for us on the cross.”

Senior pastor of CHC, Kong Hee, prepared three different sermons that he preached over the three days. All three sermons touched on issues faced in society today: sickness and disease; financial burdens and debt; shame, despair and failure; guilt and sin. Kong proclaimed that Jesus Christ has come to provide an answer to all these issues. When he gave an altar call for those who wanted to accept Jesus as their Lord and Savior, hundreds went forward to give their hearts to Christ. Ultimately, after all the drama and glamor, it is all about souls saved: the crux of Easter is what Christ has done on the cross to save the world from sin and eternal death. A total of 3,682 decisions were made over the Easter weekend at CHC. First-time visitor to City Harvest, realtor Glenn Lau, 24, was so moved by the drama that he responded to the altar call. “I could feel the sacrifices that Jesus has made for us. His love for us is so big, there is nothing compared to it. When Pastor Kong gave the altar call, I just felt the need to stand up and go for it. It takes great courage to make the first move and receive the love of God and blessings of others around you. But City Harvest makes this experience a comfortable and memorable one. Thanks for the wonderful Easter service.”

Said Derek Dunn, executive pastor of CHC, “We are thankful to God for the amazing Easter weekend we had, where many members brought their family members and friends. It was truly a sight to behold when so many came forward to give their hearts to Jesus on all three days.”

Acknowledging the hard work of the members, he added, “The success of this year’s Easter services would not have been possible without the thousands of volunteers who served over the three days. It was a team effort that brought down the presence of God.”