Leadership In The Hot Seat

In times of crisis, being a leader is about taking moral leadership beyond managerial leadership. A strategist dissected the Dos and Don’ts at the Educators’ Summit 2011. Japan Prime Minister Naoto Kan speaks with an earthquake victim Ryoko Otsubo as he leaves at an evacuation shelter on April 2, 2011 in Rikuzentakata, Iwate, Japan. The death toll continues to rise with numbers of dead and missing exceeding 20,000 in a tragedy not seen since World War II in Japan. Kan has been credited with showing great moral leadership in the face of this crisis. Photo: Athit Perawongmetha/Getty Images

One of the several things the global audience has taken note of in the wake of the Japan is the grace and composure with which Prime Minister Naoto Kan has handled the pressure. So said Viswa Sadasivan, CEO of strategic media and crisis training firm Strategic Moves Pte Ltd at a talk titled “Leadership In Crisis Communication” during the third Educators Summit on March 18. The Summit, organized by impactus! Pte Ltd at HDB Hub, was themed Insights And Best Practices.

Using many real-life corporate case studies, Sadasivan drew out the fundamentals of leadership in times of crisis. “Crisis management is actually common sense. The focus has been on managerial leadership when it should in fact be on moral leadership,” he said. While a manager is responsible for doing a task right, a leader is focused on doing the right thing.

His speech highlighted several main points—the first being that leadership is as much about being sensitive (able to perceive the feelings of the people on the other side) as it is about being sensible. 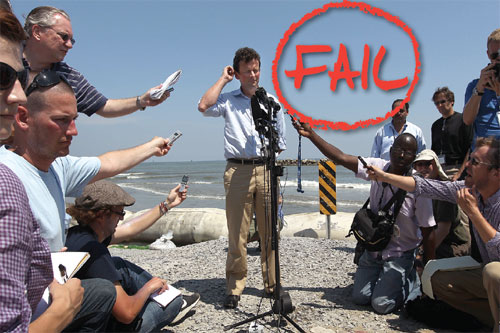 BP CEO Tony Hayward faced the media on an oil-stained beach on May 24, 2010 at Port Fourchon, Louisiana. The world is still feeling the effects of the BP oil spill nearly a year later— not only nature, but tourism and businesses have been hit. Hayward’s response after the spill—“I want my life back”— exacerbated the public outcry against BP. Hayward has since resigned. PHOTO: Athit Perawongmetha/Getty Images & John Moore/Getty Images

Calling up the example of BP’s Tony Hayward, who has since stepped down from his position as chief executive in the wake of the disastrous Deepwater Horizon oil spill, Sadasivan explained that the line he uttered, “I want my life back,” along with the act of laying blame on other parties involved such as the oil rig owners, created a public relations maelstrom.

“It’s about understanding the emotional needs of your customers,” he said, before proceeding to use the 1989 Exxon Valdez oil spill as another classic example of bad crisis management by the leadership. The then-CEO, Lawrence Rawl, was widely criticized for his response. Not only did he make his first public statement a whole six days later, he took three weeks to get to the site. When the media asked why it took him so long, he replied, “I run a global corporation; time is a premium.”

Even 10 years after the spill, 54 percent of US respondents in a survey said that they would not buy Exxon products. “In an increasingly competitive market, differentiation by price and product is becoming more challenging. As such, people are making their consumer choices based on larger factors, such as the values they want or do not want to be associated with,” said Sadasivan, illustrating his point with The Body Shop’s strong stand against animal testing, which has endeared the brand with the general public.

A leader also needs to bear accountability by taking ownership of a crisis. “Regardless of who is really to blame, if you are the point of contact with the costumers, you have to front the situation.” He pointed to DBS’ ATM crash in July last year, saying that the bank did the right thing by not skirting its accountability and pointing the blame at its vendor, IBM, as both worked behind the scenes to resolve the issue. Finally, Sadasivan said that leadership was not about following a set of SOPs, but acting on what one believes is right. In the aftermath of the Singapore Airlines Flight 006 crash in 2000, the then-CEO, Chong Choon Kong, turned a crisis into a win for the airline when he made an unprecedented opening statement, “We own the aircraft, the pilots are ours. We take responsibility.” His statement took everybody aback as it exposed the company to a possible storm of litigation. But he also subsequently said, “SIA, CAAS and Taipei authorities are all independently holding their own investigations to ascertain if there was negligence and if yes, who the responsible party is.”

Through the two statements, the company assumed moral responsibility while not implicating itself in negligence amounting to culpability. As a result, SIA’s ratings and revenues went up after that, and until today, there has been no litigation against the company. “Was it SOP that saved SIA? No, it was the leadership, the moral courage to do the right thing,” said Sadasivan.

In the same vein, he used the case of the Johnson & Johnson Tylenol crisis in 1982 to illustrate what is now commonly deemed in marketing and public relations circles as the best example of an effectively managed global catastrophe.

When a disgruntled employee laced the Tylenol capsules with cyanide, leaving seven dead, the then-CEO James Burke immediately issued a nation-wide recall of Tylenol pills against the fierce behest of the board of directors, costing the company more than USD$100 million in losses. Burke’s courage to shoulder moral responsibility as the head of the company paid off—immediately after the recall, the company’s share price dipped, but picked up and in eight months was higher than ever before. Until today, J&J remains a trusted household brand.

Recalling an incident closer to home, he gave the example of the commando dunking incident which resulted in the death of a soldier in Aug 2003. In the midst of much heated public sentiment, Minister for Defence Teo Chee Hean gave a ministerial speech that helped turn the tide.

His speech consisted of five key elements: he validated and aligned himself with the sentiment of the people by stating that it was a “deplorable and that it should never have happened,” he quickly recapped the facts to quell speculation, he talked at length about the action they had taken and the action that would be further taken, he paid tribute to the deceased, and he gave his personal assurance that such an incident would not repeat itself.

Sadasivan concluded his speech with the distinction between confidence and faith—whereas confidence deals with matters of technical expertise and SOP, faith deals with a betrayal of trust, and a leader has to discern between both in order to effectively address a crisis.