Phil Pringle and his team set up a new C3 Church in Asia. 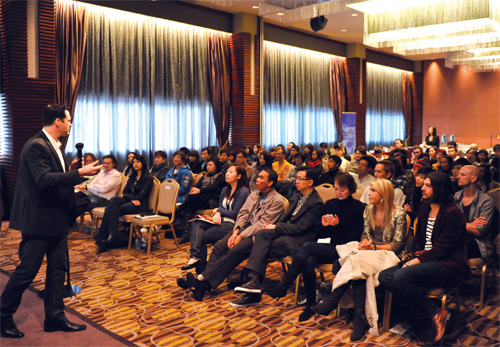 On Feb. 20, the Crystal Ballroom at the Cityview Hotel in Kowloon, Hong Kong, was abuzz with excitement as church members scurried around to make sure that everything was in place for the inaugural service of C3 Church Hong Kong.

C3 Church International, a global movement of over 240 churches was founded by Phil Pringle.

Pringle and his wife, Christine, started C3 Church in 1980 in Sydney, Australia, today, one of the most exciting and influential churches in the Asia Pacific region. Pringle’s 2020 vision is to plant 1,000 churches in 15 regions by the year 2020. This has resulted in a global movement of vibrant churches, which have been birthed as a result of his leadership and vision. Today, Pringle maintains an uncompromised passion to see cities changed by a contemporary, relevant and anointed church.

C3 Church Hong Kong is the latest church to be planted in Asia under this 2020 movement. Assisting them are Wayne and Mary Simpson who are the executive pastors of C3 Hong Kong. The couple previously served as full-time staff in Sydney before relocating to Hong Kong in January 2011.

Simpson and his wife, Mary, have both actively engaged the marketplace and have impressive corporate backgrounds. Simpson has worked in senior management positions for Ernst & Young and KPMG in Business and Risk Advisory Services, while Mary has worked in marketing and public relations for large multi-national corporations and successfully developed her own business platform. Mary also regularly writes for Australia’s No. #1 teenage girls’ magazine, Dolly, which has a monthly readership of 500,000.

On that Sunday, the room quickly began to fill up with people greeting others with hugs in true C3 style. The first-time ushers had only prepared seats for around 50 people, and had to quickly lay out more chairs when 90 showed up.

Linda Bax, a worship pastor from C3 Church, Sydney, opened the service with C3 band’s “Undivided,” followed by Chris Tomlin’s “How Great Is Our God.” Bax will be staying until April to build the Hong Kong band up before returning to Australia. Bax was accompanied by Julian McGruther on the keyboard and Colin Philps, on the guitar, who specially flew down from Australia for the inaugural C3 Church Hong Kong service. Nick Gulliver, creative designer, also flew down from Sydney to assist in C3 Church Hong Kong’s operations.

Pringle was unable to preach at the C3 Hong Kong service launch (as he was preaching in CHC that weekend), but he sent a video of himself and Chris to greet the congregation.

Simpson began with a thanksgiving offering in dedication to the planting of C3 Church Hong Kong, and spoke of King Solomon’s thanksgiving offering when he built the temple. He emphasized the power of giving, and shared how his and Mary’s ministry and personal lives began to grow as they sowed toward God. He tied this to his main sermon where he expounded on the meaning of life. He mentioned how he observed that people always seemed to be working very hard, but didn’t seem to know what they were working for.

Like King Solomon, he was a man who had it all—success, power, wealth, fame and wisdom, and yet he looked for meaning in life through pleasure, women, wine, property, music, work, possessions, ultimately coming to the conclusion that life was meaningless (Eccl. 2). There seemed to be an eternal void in his heart, the one  Ecclesiastes 3:10 says can only be filled by God Himself. Simpson then concluded his sermon and encouraged the congregation to discover the meaning of life through the person of Jesus.

The opening of C3 Hong Kong is a welcome one. Hongkonger Stephanie Chung Cheuk Ying, 22, used to attend City Harvest Church, Singapore, before returning to her country for higher education. She said, “I’ve always enjoyed Pastor Phil’s preaching in City Harvest Church. So this is like a dream come true for me to know that I can hear him preach again here in Hong Kong!” A Heart For Hong Kong

A quick chat with Mary Simpson.

Tell us about C3 Hong Kong and how it came about.

About seven years ago, my husband and I had a burden for the city of Hong Kong. When we came on staff for C3, we had a strong desire in our hearts to plant a church. We talked to Pastor Phil about it, but he told us to not set our hearts on anything but to just lay our hearts out and serve, and so we did.

Eighteen months ago, we were on our way to Amsterdam and the desire to plant a church stirred up in our hearts again. I turned to my husband and shared with him about it and he told me that he felt the same stirring in his heart as well. We thought perhaps it may be Amsterdam, but we didn’t feel the connection so we just continued to believe in God’s timing.
I’ve got ties to Asia—my grandfather’s Chinese! I see all sorts of people in Hong Kong and I just want them to know God, how much they are loved and accepted. It doesn’t matter what your background or belief is, we want to build a church that is accepting and we are just going to love them.

My husband preached a message on the meaning of life [during this opening] as we felt that the people really needed to hear the message. We want the house of God to be an oasis for them so they can feel more refreshed and recharged after leaving the service. We also want to present the gospel in a fun and relevant way.

What is your vision for C3 Hong Kong?

For God’s favor to be upon the city and the church and to have many C3 campuses in Hong Kong. We have a heart for the university students, for the business community, to see business people doing well and succeed.

How did you prepare for the first service?

Last October we had a welcome tea session where we met quite a few people. In January we came back and touched base with the people we met. We had two rehearsal services, connection events, did a concert at Lingnan University, and of course, lots of prayer meetings!

Where do you see C3 Hong Kong in a year?

In one year, we want C3 Hong Kong to be established as a church. We want to be discipling people, have people bringing their friends to come and see people getting saved every week. We want to have at least two other campuses in Hong Kong. We also want to have full translation services by then.