A Trip Back In Time The ladies from COPE reliving the joys of the ‘70s trishaw.

Over two Saturdays, COPE, or Community Outreach Programme for the Elderly, an arm of City Harvest Community Services Association, treated a group of more than 100 elderly individuals to a morning of fun with an educational trip to the Land Transport Gallery operated by Land Transport Authority.

March 26 saw 38 clients from the Southeast CDC (Toa Payoh GRC) visiting the gallery at Hampshire Road. For the elderly, this visit to the gallery and seeing Singapore’s past transportation system brought back fond memories of life in the 60s and 70s.  It was also an eye-opening experience for them as they caught a glimpse of Singapore’s future transport system.

“This visit to the Land Transport Gallery gives the elderly a picture of the past, present and future, providing an overview of Singapore’s transport development through the years. It also let them reminisce about the old traffic system in Singapore,” said Kelly Tang, program executive of CHCSA, adding that the trip also gave the senior citizens the opportunity to widen their scope of activity and expand their social circle. The elderly visitors enjoyed the many informative zones at the Gallery; some even shared their personal knowledge and past experiences.

A 45-minute tour around the gallery, conducted in Mandarin, brought the group through six different zones where they not only witnessed the evolution of Singapore’s land transportation system, but also caught a glimpse at the transport systems of the world’s major cities.

The tour also included a “Memories” zone where the elderly were able to “travel back in time” to view modes of transport from the past that no longer exist today. It was a treat for them as they explored live-sized exhibits such as the rickshaw, motor buses and cars, as well as “pirate taxis”—taxis with no fare-meters so the drivers could charge what they wanted. For 88-year-old Liu Jing Hwa, it was sheer nostalgia as she remembered how she used to ride on the “Mosquito Bus.” “The ‘Mosquito Bus’ used to invite a lot of mosquitoes and it was very unsafe as there were no doors. But it was very cheap and I took these buses often to North Bridge Road.”

Stepping through revolving doors that brought them from one zone to another, the participants witnessed how the Land Transport Authority of Singapore has been adept at overcoming the challenges faced in Singapore’s transport system faced; they also had the opportunity to explore the many interactive touch pads and sliding LCD screens. After the entertaining and enriching morning, the group adjourned to a nearby restaurant for a feast of Indian and Chinese cuisine.

COPE’s clientele is found in 24 blocks in Toa Payoh and Pine Close. Susan Ng, a volunteer with residents at Toa Payoh, shared that many senior citizens are always thrilled at the idea of being able to go on outings. She added that these trips help the elderly to adopt a positive mindset and to age actively.

“We have brought these elderly to places such as Universal Studios Singapore and even on day trips to Malaysia. We also conduct interesting activities such as training workshops,” said Tang.

In the works is the House of Joy, a care center for the elderly citizens in the Mountbatten constituency, a venue for them to engage in fun and meaningful activities in an encouraging environment. 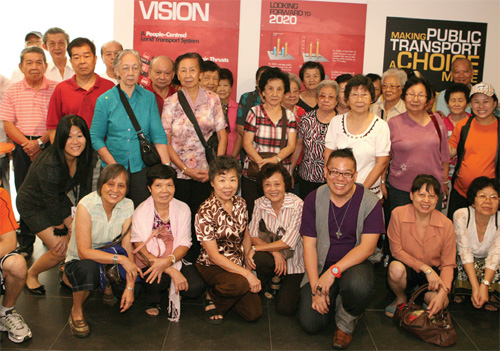 At the Land Transport Gallery, there’s fun for all ages. Young children get to enjoy an “Art By The Park” session after touring the gallery; students from primary and secondary schools glean from experiential learning; and tertiary institutions have tied up their economics syllabus with LTA. Grassroot groups and welfare organization have also organized tours for their members.

Over the past three years, the gallery has seen over 110,000 visitors. Sitting at its Hampshire Road premise, the place is segregated into six different zones where visitors can enjoy an interactive, multimedia, and sensory tour. Accommodating large groups as well as walk-in members of the public, visitors enjoy a 45-minute guided tour. Operating hours at the gallery daily (except Monday) are from 9 a.m. to 4 p.m. Tours are conducted daily (except Monday) at 9 a.m., 11 a.m., 1 p.m. and 3 p.m., with the last tour ending at 4 p.m.

Interested visitors can book a tour at +65 6396 2550, email to ltgallery@lta.gov.sg or log on to http://app.ltgallery.lta.gov.sg/ for more information.