She might refer to them as her “angels,” but really, Zoe Yue is the real guardian angel of these ones with special needs. 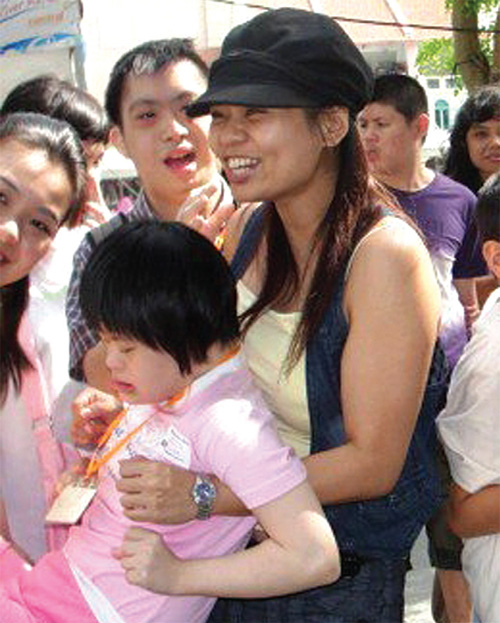 Zoe Yue (with cap) looks forward to spending time with her charges each week. PHOTO COURTESY OF LILY YONG

For almost 16 years now, Zoe Yue has been giving her time and energy to people with special needs.

It all began with volunteering in her church project that dealt with visiting orphanages. Yue, together with a group of volunteers, visited various orphanages and welfare homes every week to spend time with whom they referred to as “angels.” These angels were mostly children with intellectual disabilities.

“My heart always goes out to these children whenever I see them around the neighborhood,” said Yue. “I just have a soft spot for them.”

Initially, she had some difficulty reaching out to her charges, especially the ones who refused to respond to her friendship. “I was pretty discouraged, but I told myself that I would continue to do what I could for them.”

Devoting most of her free time to these special angels means that this sales executive hardly has any time for herself—not that she minds. Yet, Yue also understands the need to detach herself from her charges every once in a while to maintain a balance in life. Her “me-time” includes swimming and spending time catching up with her friends and loved ones. This helps her to rejuvenate her soul and allows her to give herself to these special children once again.

Despite having more on her plate to juggle with, Yue goes the extra mile for her charges.

One of Yue’s charges is Jesslyn Wong, a young girl with Down Syndrome. When Wong, who is passionate about dancing, recently took part in a special dance performance by De Artistes, Yue was there to cheer her on.

Reaching out to people with special needs is no easy feat, as these angels are not really as angelic as they sound. Yue and other volunteers sometimes get beaten or pinched by the children, and it takes more than a strong mind to be able to cope with the stress and difficulties. Yue (back row, third from right with cap) credits her tenacity to the examples set by her fellow volunteers. PHOTO COURTESY OF ZOE YUE

Yue’s friend of close to 20 years, Lily Yong, 39, attests to Yue’s ability to understand the needs of the special needs children under her care.

During a recent bus ride, Ian Peck, a child with autism spectrum disorder, threw a tantrum, flinging off his sandals and banging his head just as the bus was about to drive off from its destination. Amidst the volunteers’ futile attempts to pacify the boy, Yue instinctively suggested alighting together with the boy to get a drink. True enough, Peck returned to the bus together with Yue, calm and happy with his drink.

Serving those with special needs sometimes takes a toll when volunteers face the loss of their angels as well. One of the boys that Yue was befriending passed on at the age of 15 due to his illness. During the wake, Yue could not hold back her tears.

“The funeral was quiet and even the coffin was a very simple one. Yet to me, this was the passing of a life—a life that may not have meant much to some, but it meant a lot to me,” recalled Yue.

Interacting with these children has helped Yue to grow as a person, in compassion and character. Her capacity to love the hurting and needy has widened in these 16 years. She also credits her tenacity to her fellow volunteers, in whom she has witnessed unconditional love and patience in their work with special needs individuals.

Difficulties, stress and minor bruises do not deter Yue from volunteering with these intellectually disabled children. Whether it is an autistic boy who looks forward to Yue’s visits and waits at the door to catch the first glimpse of her, or the young girl who used to spit at her but now smiles and runs to hug her each time she visits, Yue cherishes her time with these whom she calls angels.