The Art Of The City The Singapore Biennale kicked off to a roaring start with some 600 local and international guests at its reception at the Merlion Park during the Biennale’s opening weekend on March 11. Guest-of-Honor, Professor Edwin Thumboo also recited his poem Ulysses By The Merlion, written in celebration of this iconic landmark.

Featuring 63 artists from 30 countries with over half of them creating new commissions or premiering new works, the buzz of this year’s Biennale entitled Open House derives from the unique exhibition venues—the Old Kallang Airport is symbolic of international air and sea ports, Singapore Art Museum and 8Q are representative of the Housing Development Board flats and the National Museum of Singapore is modelled after shopping centers and night markets.

City News highlights some of this year’s crop. Definitely a main highlight this year, Tatzu Nishi’s The Merlion Hotel is one of many key commissioned pieces of the Biennale. This one-of-a-kind installation piece transformed Singapore’s beloved iconic landmark into a temporary and luxurious hotel suite, open during the day for public viewing and in the evening for overnight stays.

For Tsukasa Ikegami, 36, a Japanese curator who flew to Singapore for the Biennale, the Merlion Hotel project is an incredible piece of work. Sharing his interpretation of the work, he said, “By building a hotel room around Singapore’s icon, it transforms the Merlion from a public space into a private space. The Merlion has always been a place for public viewing, whether from afar or up-close but now it has been transformed into a private space as only a few visitors at any one time are able to view it, and in the intimacy of a hotel room.”

Although reservations for the hotel stay at night have been fully booked, be sure to check out the “exhibit” during the day from 10 a.m. to 7 p.m.

The Impossibility Of Knowing @ SAM at 8Q

Award-winning Singaporean film director Tan Pin Pin’s five short films collectively titled The Impossibility of Knowing offers a different perspective on the hyper-urban and sterile Singapore landscape. Showcasing a list of different places in Singapore where a traumatic incident has taken place, be it a fire burning down a mosque, the collapse of a highway, an accidental death along the canal or a teenage suicide at a condominium, Tan explores if video is a good enough medium to capture the aura of a space that has been the scene of a traumatic incident.

The award-winning Singaporean film director reveals the inspiration for this documentary, “At my studio along Serangoon Road, I often walk past a hotel called Fortuna Hotel, and I happen to be old enough to know that this hotel was built on the same site where Hotel New World once was. The hotel collapsed in 1986 because of a gross engineering miscalculation. On that spot, 33 people died and many others were injured. It occurred to me that I held something within: a subjective list of places that I cannot forget because of the tragedies, incidents, accidents that identify them. Each of us harbors an inchoate list in our minds.”

Besides showcasing Tan’s latest project, the Biennale also offers her other award-winning works. For those pressed for time, one other documentary to check out is Moving House. Documenting the pragmatism of the government in land-scarce Singapore, it delves into issues close to the heart of many Singaporeans, in the name of development: tomb excavation. The juxtaposition between the tombstone set against an open space and the cramped crematorium challenges the audience to think about the impact modernity has on our social relations. 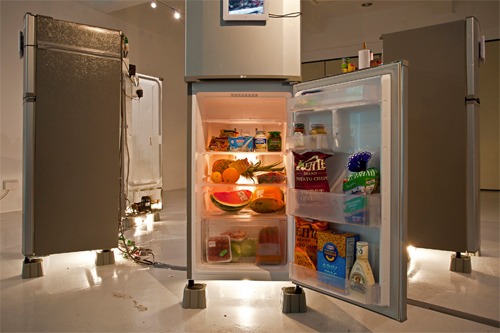 With Singapore being touted as a “foodie” nation, a local art exhibition is incomplete without a showcase of food. In this food installation by Malaysian artist Roslisham Ismail aka Ise, viewers get a peek into the refrigerators of six Singaporean families to get insights into how the typical family thinks about buying, cooking and eating—and in turn, understand the way domestic processes shape our lives and connections with others. The work is the fruit of lengthy research periods conducted by the artist in Singapore with six families of diverse profiles.

Try spotting the differences between the contents in the various fridges, and make a mental comparison with that in your own refrigerator. A refreshing change of medium, Secret Affair shows that there are no limits to art.

Sidestepping the starkness of the concrete jungles in Singapore and New York, Swiss photographer Beat Streuli’s street portraits captures the unguarded, intimate moments of anonymous urban citizens as they go about their everyday lives. Streuli has been documenting the images since the late 1990s. The portraits are presented in a multi-channel video presentation.

One package, many voices—Self Portrait is the combined effort of more than 3,000 Singaporean children who have drawn self-portraits which were then linked to each other in a 24-hour long animation. What is interesting about Self Portrait is that the 3,000 students created their own portraits without drawing out their own faces. Aimed at cultivating creativity and critical thinking among Singaporean youth, this work captures a sense of the thoughts and feelings of our young about their surrounding landscape.

The Singapore Biennale 2011 is open to members of the public until May 15, from 10 a.m. to 7 p.m. daily. Last admission to Old Kallang Airport and the museums is at 6:15 p.m. Tickets are priced at S$10 for adults (free for children). Tickets are available at the Singapore Art Museum and SAM at 8Q, the National Museum of Singapore and the Old Kallang Airport. Shuttle bus services are available from venue to venue. Log on to www.singaporebiennale.org for more information.